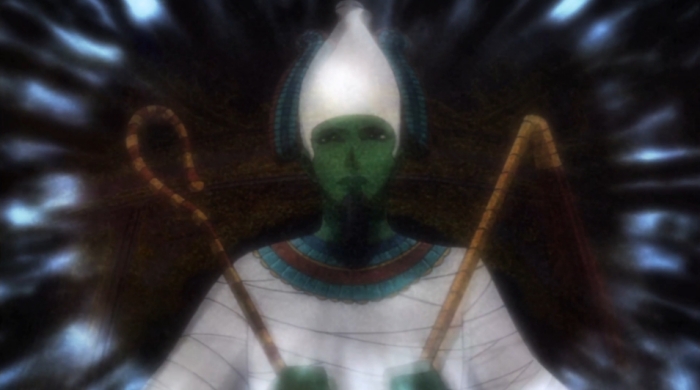 Recap: Yuri has been kidnapped by the campione Voban to perform a ritual and summon a god for Voban’s entertainment.

Lifesong’s Thoughts
Voban is a powerful old bastard who will go to any length for his own enjoyment. When Godou was fighting Athena it seemed like he just barely scrapped by and that was in a situation where he knew the secrets of his enemy. Voban is a bit more of a mystery making this fight a hard one for the young god slayer and a mystery for us.

It takes a real bastard to sacrifice a group of women just for a good time.

The pacing for this anime is hardcore. I’ve been mostly okay with it so far and I don’t have any major complaints, everything important is still there, but this episode really made it hit home just how fast this anime is moving. Battles are finished in a flash and new important terms and events are established in the blink of an eye. Episode six showed off a decent amount of Voban’s power but they kept it all mysterious and without explanation. I guess it was kind of neat to see Godou go up against someone like this but I also have this nagging feeling that unless I am passed all these events in the book by episode seven I will be re-watching episode six to make sure I didn’t miss anything important.

One important example is Salvatore Doni. Salvatore Doni fought Godou in the week before Godou came back to Japan after the first episode. This was mentioned in the early parts of episode two, right before Godou discovers a naked Erica in his bed. I bet you remember that part! Not that I am one to judge, I missed this fact the first time myself… it’s a scene where getting distracted and missing the info Godou shared is an entirely understandable thing.

Voban even made Yuri cry. Godou had better put this old man in his place!

With no magical make out sessions to rely on and little info at all on where Voban’s authorities came from Godou is in a bit of a bind. I suspect that just as Erica saved the day with Athena Yuri will pull some power to save the day for Godou. Perhaps Yuri will use her power to divine more of Voban’s secrets and share those with Godou. Personally I hope the anime will spend some time on Voban’s various authorities and their origins as he has some pretty intriguing powers. In particular his ability to turn people into salt comes from the christian bible. Unless Voban defeated the god of the entire christian bible which honestly seems highly unlikely, there must be some other logic at work and am very curious to see exactly what that is.

And what kind of god gives the power to both summon wolves and transform into a werewolf that can absorb the power of the sun? I’ve been trying to think of who this might be and I’m honestly stumped. If anyone has a decent guess throw it at me in the comments I am curious to hear what you might think.

I am looking forward to seeing how Godou will beat up Voban next week. Hopefully we will also get a more formal introduction for harem member number 3 Liliana who has so far received a lot less attention than she has in the books. Her personality seems pretty opposite of Erica, even more so than Yuri. Usually harem antics annoy me, but so far they work pretty well in this story and even manage to make a degree of sense. Godou killed a god after all, having a few women by his side doesn’t seem like a stretch in comparison.

Join me again next week as we find out what other devious tricks Voban is hiding up his sleeves!

Bring us to warp ensign!

Osiris
“A god dead, but now revived… Dismembered and torn apart, but with regained life, who has descended to the underworld. Green skin, bandages a crown… The god you defeated is the Egyptian ruler over the land of the dead, Osiris.

The interesting thing to note here that the anime did not point out is that Osiris is a god whose myth is tied to the Nile River and also associated with new life. This might be where the idea for the dead servants comes from.

One thought on “Campione! Episode 6”