Hello, and welcome to All Your Monies, where The Glorio Blog’s resident toy and figure collecting crew (and Aquagaze) will run down the last week’s new pre-orders, turning a loving or scathing eye over what’s been put out for you to spend your hard earned cash on. This week we’re kind of picking up the scraps.

Zigg: I like this a lot more than Akane. The pose is dramatic, the clothing detail appears to be excellent and the very pale, exagerrated face works better here than it did there, mostly down to the narrower eyes and more detailed hair. I’m still a little iffy on Union Creative’s track record and it’s still too expensive, but this is definitely a figure I at least can get behind.

Jel: That has to be the most detailed men’s dress shirt and slacks I’ve ever seen on a figure. I wish I could say the same for the face and hair though, which almost look painted on. Overall it teeters between “cool” and “boring” but I think it leans just on the right side of cool to be worth a look.

Lifesong: Well his complexion isn’t doing so great, but at least he’s not as pale as Akane. I actually like this figure a lot more than their Akane. It’s expressive and seems don’t jump at me as strongly. It still costs way more than I think it is worth, but if you are a Psycho-Pass fan looking to grab a figure from the show this might be your best bet.

Aqua: Happy birthday! … Ah, err, wrong Kogami. Anyways, following up on Akane is her brooding colleague, who just like his gullible partner seems to need a few more days in the sun. Nevertheless, Kogami lives up to the reputation set by the previous figure in Union Creative’s Psycho-Pass line, with a strong, stylized wind blowing through his vest and some wonderfully detailed shading on his trousers. Even his hand has all the appropriate wrinkles and musculature you’d expect from a battle-hardened enforcer. Sadly enough, this quality comes at a hefty price, yet if you can’t wait for the show to return this fall, you’d better start saving. 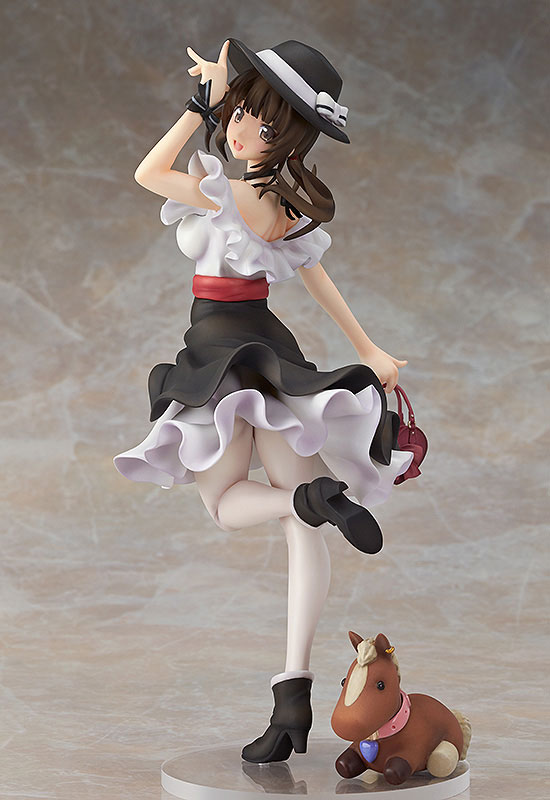 Zigg: Yet another nice figure ruined by the mysterious ability of anime girl models to twist their spines 270 degrees. Seriously though, this pose is tired, silly and overused. Aside from that it appears to be a nice, if slightly under-detailed model. I dig the horse plushy, which is the kind of nice little touch which brings personality to what could otherwise be a slightly run of the mill toy. Also, I barely remember Tari Tari

Jel: Oh my dear sweet Sawa, you deserve better, both in anime and in figure form. It’s not that this isn’t a nice figure, it’s just not great either. Sawa’s face looks nice but her dress severely lacking detail, especially if you look at her from the front. At least the price is reasonable and the stuffed horse is a nice nod to the show, I’m going to have to pass on this one though.

Lifesong: I never did finish this show, but the one thing I remember about it is that Sawa was the best character. She is looking stylish here. I love the hat and playful pose. I won’t be buying her, but I do like her sense of style and the price the isn’t bad. The plush horse is a nice touch.

Aqua: Everyone and their mum knows Sawa was the best character in Tari Tari, and while this figure looks a bit off with the poor girl making a near 180-degree turn from her feet to her face, her, errm… unique sense of fashion is certainly being put on display. Quality-wise, there is very little to complain about here, though while the plush horse is a nice addition — or, depending on your interpretation, a desperate indication of who this girl was supposed to be again — it seems to exist mostly to fill up the void. Overall, Phat Company’s Sawa is competent and inoffensive, much like the show it is based on, but unless your name is Jel, I’d save your money for something else.

Zigg: This is another example of that Nendoroid classic ‘humdrum figure, awesome acessories’. In this case it’s the faces which really make it, both of which are some of the best and funniest ever seen in the range. With that said, Ararararagi is such an inherently dislikable character that it’s difficult for me to get worked up about any figure of him.

Jel: Ararararagi is pretty boring on his own but those are some fantastic alternate faces. I like the extended road base as well, giving you the opportunity to re-enact your favorite super long conversations with the heroine of your choice. The massive nodachi blade is kind of an odd choice as that seems more appropriate to include with Shinobu, but I guess that’s cool too. It’s a well done rendition of the character and would look great with any of the other Monogatari nendos you might have.

Lifesong: All I have to say about this nendroid is that I hope someone with who owns both Woody and a camera buys one. There are adventures that those two need to go on for the sake of figure photography.

Aqua: The world’s favourite paedophile gets his own Nendoroid, with a comically Shaft-esque creeper face as his most striking feature. With Arararagi’s trademark ahoge and some comical expressions, GSC have clearly tried their best to make this guy worth a purchase, yet as is the case with many male protagonists, he simply doesn’t have that much going for himself. His outfit is fairly boring and his accessories rather far-fetched, so unless you really want someone to creep after all those Nendoroids with pained or embarrassed expressions you own, I’d give you the same advice as I’d give to every (pre-)teen girl in the Monogatari universe: Stay the hell away from this guy.

Zigg: Torn on this – it’s a really striking design, but also sort of inappropriately fetishy too. It’s a classic case of a character’s head not really matching the way the rest of their body looks. Having said that, the detail is impressive and I’m loving the extensive use of translucent plastic to give an airy, glass-like effect. Interesting curio.

Jel: This a visually interesting figure. I like all the translucent bits, particularly her fabulous pink glass sword. The ribbons and pose give the entire figure a nice flow to it, directing eyes from top to bottom. I do wonder what happened to the rest of her skirt, but overall it’s quite nice to look at.

Lifesong: Manaka is very cute. The shading on her outfit is pretty and I love the way they blend it into the translucent part of her skirt, shoes and ear… I have absolutely no idea what to call those things on her ears, ear muffs maybe, ear ribbons? Whatever they are they look great. Vertex are proving that are a figure company to watch. If they make a figure for something I’m invested in I doubt I’ll be able to resist.

Aqua: Ah, another classic example of a character design that just seems to end from the waist down. What the heck is up with that pose, by the way? Her spine is twisted beyond recognition, and don’t even get me started on the position of her feet. How the hell does she stay upright like that? Does she have a supernatural sense of balance or something? Anyways, Manaka here is simply a masterclass in phoning it in, with a cluttered, generic design and some extremely fake looking translucence on her “skirt” and ear muffs. While the shading on her actual clothes looks pretty good, regardless of how over the top it is, the effect is used on everything, resulting in the ribbon on her chest looking like it’s made out of leather. Then again, would we expect something decent to come out of a generic RPG-spin-off of an eroge dating sim?

Zigg: Infinite Stratos is perhaps the most beautiful, untarnished example of a show made purely so that stuff like this can exist. How can I care about a character who is barely even a character?

Jel: I love Laura’s design (when she’s in her normal clothes) but I never noticed that weird, giant slash of hair across her bangs before. It does not translate well in this case, nor do I care for the Bunny Girl treatment. I especially hate the embarrassed look. Isn’t this the girl that unashamedly declared the worthless main character her “wife” and woke him up the next day by wrestling him naked in bed? I’d rather see more of that attitude than something like this.

Lifesong: Laura is the runaway figure from this week for me. The reason I like this figure so much is because Laura’s personality comes though in force. She is at her cutest when she is trying to follow the advice of her older, but equally clueless colleges. What we see here is a Laura who has absolutely no idea how cute she is. Sadly she is too large and too expensive for me. I just might consider her again once December is a bit closer.

Aqua: I hate bunny suits. I hate figures expressing vulnerability or embarrassment. I hate Infinite Stratos. I hate overpriced junk. I hate everything that Lifesong loves. I hate this figure.