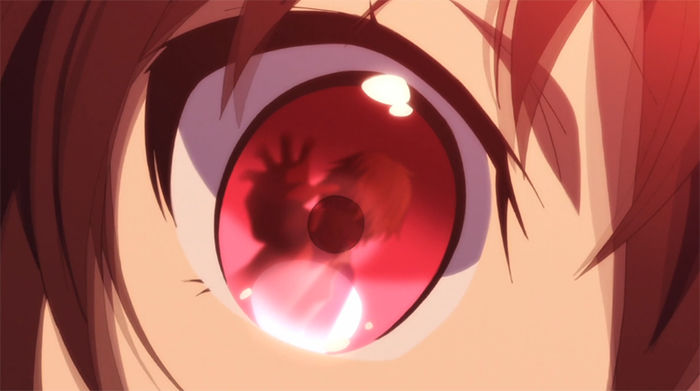 Things are looking grim for the Early Edition as Chaos Dragon becomes our first casualty of the season and many of the other shows aren’t quite up to par. Ironically we have School Live confirming it is, in fact, the darkest timeline and Prison School turning out to be quite funny. Who’d have guessed that?

Jel: I guess this episode put aside any doubts that School Live was going to stay dark. It tries to have a little fun but that only sets up the deliciously sinister twisting of the knife when Yuki asks Shovel Girl about romantic stories. Does it make me a terrible person if that was my favorite part of the show? At least you can’t help but admire Shovel Girl’s steel resolve to survive. Elsewhere the “Megu-nee isn’t real” theory seemed to fall apart although I still can’t rule it out yet. Maybe all the girls are delusional to a certain degree? Or maybe they’re just playing along to keep Yuki under control? Maybe we’re ALL insane and this weird show doesn’t actually exist.

Iro: Turns out that while the addition of Ryohgo Narita’s robot zombie merchant does indeed make Chaos Dragon more enjoyable, that still isn’t enough to drag it out of the depths of the past three episodes. All the women (including this episode’s newcomer, a sniper who wears strips of cloth and nothing else) are still walking otaku fantasies, Ibuki is still dull to the point of tears, and this show is still overall a pain to watch. Sorry Narita, but consider Chaos Dragon dropped.

Euri: I feel like this episode was what Natsume’s Book of Friends would be if it wound up being a shounen show. We have a bunch of creepy looking spirits rampaging because they want revenge, yet the person they want revenge against is long dead and they have no concept of how long humans live for, and so they resort to attacking anyone mildly similar. There’s not much of a happy ending in this episode, as Tora basically destroys them all. It makes me wonder about Tora’s true strength, given that he had to be sealed and not killed, and how easily he killed these monsters when a human could only trap them under a rock. Perhaps this is a limitation of humans, but I’ve got to assume it’s Tora that’s the exception. Given the spirts didn’t believe Tora to be a threat, I’m going to hedge a bet that he’ll look different if given the opportunity to eat a few humans and recover a little. Seeing Ushio thank him for helping was an interesting development, but I feel we’re still a way off seeing some proper cooperation between the two. 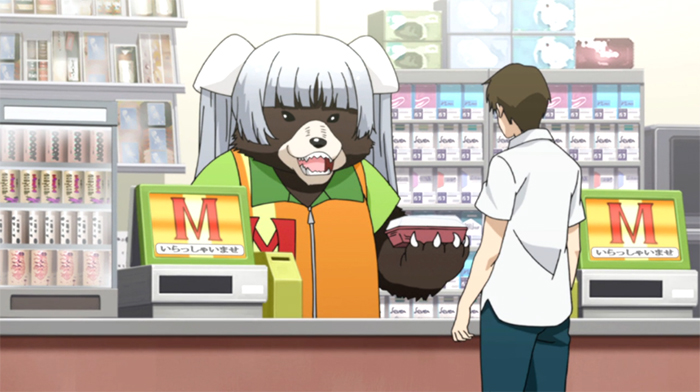 Jel: This was not the most exciting episode as there wasn’t nearly enough weird things happening. In fact I’m kind of concerned that season 2 is going to take the task of preparing for Miss Monochrome’s world tour a little too seriously. That said, the bear joke was so, so very bad that you couldn’t help but laugh at it. In case anyone didn’t catch it, I guess they were playing off of “figma” or “Fi Gu Ma” and mistaking it for “Fi Ku Ma”, “kuma” being the word for “bear”. The characters for “Gu” and “Ku” are virtually identical, but I’m sure all you weebs out there already know that. Still a fun episode but I hope we get some kind of alien invasion or other world altering event soon.

Marlin: Prison school stays strong, continuing its unique brand of ultra-sexualization and absolutely fantastic physical comedy. As Gee said last week, this show has turned into a full on prison escape drama, and it meshes so well with its ridiculous comedic style that I can’t help but laugh from beginning to end. Every twist and turn that gets in the way of their plans makes the escape that much tenser. Even the misunderstanding comedy, which can be some of the worst kinds of jokes when poorly executed, is flawless in its poking fun at its ridiculous scenario. As much as I never thought this was going to be my kind of show, I find myself coming back every week more invested than the one prior.

Jel: I swear if someone doesn’t get into a spaceship soon I’m dropping this. Instead of the hard work and guts I was expecting after last week’s plot twist, we dove into the ever exciting world of labor union politics. Kaito’s little trick to save the lab at the end was kind of neat, but the fact that he still needed money seems counter productive to the message. Wasn’t he supposed to use his creative energy to make something out of nothing instead of figuring out how to game the system? In a way that doesn’t make him much better than Nagisa. I guess they still don’t have nearly as many resources as they used to so we’ll see how it goes, but if Classroom Crisis becomes more about how to maneuver through red tape than the ingenuity of the human spirit I can’t say I’m going to watch much more.