Chakuro is the writer and archivist of the Mud Whale, a tiny island that floats across a sea of sand. 9 out of 10 of the inhabitants are blessed with magical powers, but these powers also doom them to a short lifespan. While exploring another island one day, Chakuro and his friends discover a mysterious girl who may come from a world beyond their knowing.

This was an absolute delight and definitely one of the most unexpected high points of the season. There’s probably a touch too much ‘as you know’ exposition here, but it’s in service of a rich and interesting world that’s very different from pretty much anything we’ve seen before, and one that’s packed full of intriguing concepts. I’m particularly fascinated by the idea of a world where having superpowers is normal, simultaneously married to the idea of a society that’s mostly extremely youthful turning that apparent imbalance on its head. The themes of a hidden world and the youthful quest for exploration are well worn but always welcome, and despite J.C Staff’s rather dubious reputation it even manages to look mostly fantastic, mostly due to its charming aesthetic and some gorgeous background work.

It’s all very…Ghibli-esque, which is of course usually the kiss of death for such a show, since it’s a pretty impossible standard to live up to. I’m also reminded of two other recent shows, Gargantia on the Verdurous Planet for its ocean bound community and freewheeling spirit, and From the New World for its foreboding mix of ancient magic and conspiracy. Both those stories showed promise but ultimately failed to stick the landing, but I’m hoping Children of the Whales can evoke their soul without suffering their downfall, because there’s undoubtedly a wonderfully heady cocktail of ideas here. 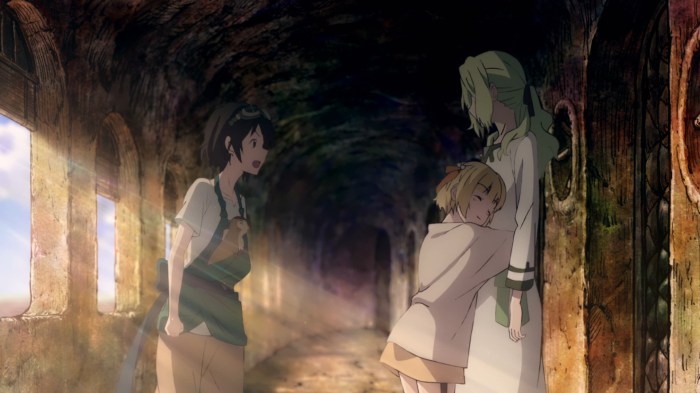 You’ll have to forgive me, anime keeps giving me really unique ways to apply what I’m learning to my experience. I was looking forward to this show, anything that promises the scope of Gargantia on the Verdurous Planet is at least worth checking out. It’s good to know the first episode really delivers on that promise. There’s a lot of good world-building that helps to ground Xakupw’s experience.(seriously I can’t help myself) It also does a good job of both showing and telling, with his job being ship chronicler it also feels completely natural. What I’m most interested in is the true nature of the Thalymas powers. We know they are powered by emotion, but also that the society specifically tries to limit emotional expression. Are the powers linked to why the world has turned into its strange desert state? It reminds me a lot of From the New World, another super powered dystopia. In it, emotions must be limited because they literally tear the minds of their users apart and turn them into unstoppable monsters. The only thing that confused me is that the Elders seemed to point to a lack of emotions being the problem in those from the outside world. We’ll have to wait and see what the true nature is.

I’m enjoying the characters a lot so far. As I said, Xakupw does a good job as the main character in his knowledge of the world to give us context. Lukos fills the role of Eureka here, a powerful but emotionless girl who captures the MC’s curiosity. The real wild card is Ouvi, who seems to be more like the real coming of age hero. He’s brash, powerful, and desperate to know about the world. It’s this determination that’s brought the three together, and I can’t wait to see how they play off each other. Obviously Sami won’t be too far behind, I enjoy the energy she brought to scenes so hopefully she too will become a part of this travelling band before long.

Now this, I was not anticipating. I’d even say the premiere managed to edge out over The Ancient Magus’ Bride for me, and given how much I was/am looking forward to that show, that’s saying a lot. For the record, I knew absolutely nothing about Children of the Whales going into it other than the brief synopsis I read several months ago and mostly forgot about. My expectations for the series therefore weren’t so much low as they were nonexistent – although if I had bothered to look up Children of the Whales before watching, the knowledge that it’s being directed by Kyohei Ishiguro and produced by J.C.Staff wouldn’t exactly have thrilled me.

Based on the first episode though, it seems a very safe bet that I’ll be keeping it around; the story has the potential to be both unique and far-reaching, and the characters to be both interesting and sympathetic. The overall feeling I got was something like Nausicaä or Laputa meets Gargantia on the Verdurous Planet; a sci-fi/fantasy adventure narrative with a strong social focus and the potential for a lot of really solid world-building. This is exactly the kind of scope I want from my anime, and a much-welcome diversion from your typical high school setting, bishounen/idol-filled cast, or fanservice-laden action piece. Add to this the incredibly soft but lush artwork, and I’d say we have a surprise winner on our hands.

One thought on “First Look: Children of the Whales”