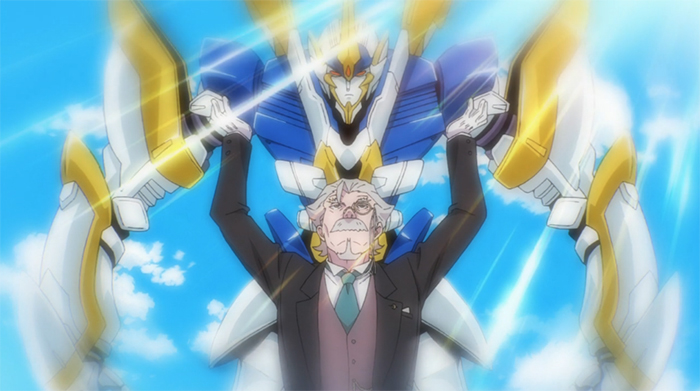 Pretend we’re still living in better times as we welcome back Mr. Osomatsu, Classicaloid, Love Live! Sunshine!!, March Comes In Like a Lion, Blood Blockade Battlefront and technically, Kino’s Journey. Oh, and I guess we have Roundup newcomers The Ancient Magus Bride and Anime-Gataris.

Jel: ​Osomatsu continues to push the boundaries of what you can get away with in a TV anime and well, good taste in general. I would not be surprised if the beginning of episode 3 got edited or banned again, so watch it while you can. The crass humor worked well in episode 2 with the talking organs, setting up an elaborate means of dunking on Osomatsu himself. The caveman bit, while amusing for shock vlue, was not as good.

Actually I’d say the entire episode 3 was a bit flat, especially since it relied heavily on us knowing the big cameo in the second half. According to Iro’s research, there is actually a show with cute girls doing competitive eating and “Shouei” is the real host. I guess he also did some super sentai? (Iro’s Note: He’s Ginga Blue!) Even knowing that I’m not sure the bit was funny. The past two weeks of Osomatsu haven’t lived up to the stellar first episode, and moving forward I would like to see some more actual humor than pure shock value.

Gee: This week’s episode kind of confirmed one of my fears which was that instead of being a continuation of the original anime series, it was more akin to a soft reboot. The original Kino’s Journey anime had not only already done the coliseum arc, but had also done it arguably better than the new version of the same story. The only difference being that the new anime wraps it up faster to set Shizu up as a reoccurring character compared to the original anime which wrote him away as a one-off. In a sense, I actually understand the reasoning here. If the new Kino’s Journey is serious about adapting new later stories including the ones where Shizu shows up again, then doing the coliseum arc is mandatory to get a new generation of audience up to speed. By rushing through an arc that many old fans are already familiar with, it’ll hopefully give the new series more episodes to focus on new content. Still, for any old fan, one can only hope that this episode isn’t indicative of where the rest of the show goes. I’m on board with a new Kino’s Journey telling new stories, I’m much less interested in an inconsistent remake.

Aqua: After two episodes, I’m feeling the need to step in. Admit it, it’s hard to deny that there’s something major missing here. Classicaloid used to be the kind of show that benefited from constantly reinventing itself and slamming the reset button at the end of every episode, so seeing it try some kind of slow-burn, long-form storytelling is positively alienating. Wagner’s shenanigans have brought the usually so attention deficit show to a grinding halt and seem to have so far mostly polished the subversive edge off of the ridiculous mess that was the first season. I mean, actual educational value? In my Classicaloid? Get out. While Classicaloid‘s best episodes twisted the characters’ ostensibly one-note quirks into imaginative plots, season two almost looks banal in comparison, toning the quirkiness down to predictable manzai routines and — seriously? — fart jokes. The sheer lack of creativity on display here actually made me realize that with Schubert, Tchaikoskvy and Badarzewska missing for some absurd reason, none of the remaining Classicaloids are actually all that endearing when they’re simply left to do as they’ve always done. With such a shocking refusal to challenge itself as its new prerogative, I’m not sure if Classicaloid can survive another season.

Aqua: Of course it’s one hundred new students they need. Of course. Because one and zero are apparently the only two numbers Love Live! knows and boy, will it not shut up about them. At least it knows more numbers than it knows plots. Credit where it’s due — splitting up the group to pair up characters we don’t usually seen sharing the screen is a solid idea for a show that has, y’know, nine main characters. It’s unfortunate then, that Love Live! still refuses to cut any of the girls loose from the three-man hive mind they’re seemingly contractually bound to. Why not use this opportunity to, say, have Kanan and Hanamaru switch places in their manzai routines with Mari and Yoshiko respectively? Love Live! is so obsessed with the status quo it’s been perpetuating since episode one of the original show — the same archetypes locked in the same dynamics locked in the same boring “let’s save our school” plot — it expects to run on autopilot even when it’s trying to challenge itself. That would definitely explain why this season feels even more artificial and meticulously choreographed than the more character-focused first one. Also, what kind of chuunibyou doesn’t like heavy metal?

Jel: March jumps right back in to where left off, not even bothering to reset the episode count. It’s almost as if they are expecting people to marathon the series later because this felt like a very average, mid-season episode. Watching Rei enjoy making friends was nice, but as I constantly brought up last season I do not care about the shogi drama. Sadly I’m going to have to accept that is focus of the show now. I signed up for March because it was a great show about healing and growing. Sure, Rei’s complicated feelings about shogi are a part of that, but I felt like the show got out of balance about two thirds through season 1. If things stay balanced the way they are, I might even question whether I want to keep watching.

Aqua: You don’t need to know the original manga by heart like I do to know that this episode somewhat struggled to fit multiple standalone chapters into a single coherent narrative. Nevertheless, the introduction of tech-savvy magus Angelica and Simon, the priest who’s not-so-subtly spying on Elias for the Church, gives a better view of what The Ancient Magus’ Bride is supposed to be than the first episode ever could. Adding some relatively reasonable adults to the main cast helps put Chise’s and Elias’s dynamic into context and drag the latter off of his pedestal. Leaving out some hints at Elias’ darker side — his jealousy at Angelica teaching “his” apprentice, his unfeeling question into Chise’s parents — this episode was overall a more light-hearted affair. Dated as they might be, the distinct super-deformed gags from the manga translate surprisingly well, and with the addition of some lovely visual details and directorial flourish, director Norihiro Naganuma proves for the first time the additional value created by bringing it to the small screen. Thanks in part to some sub-par subtitling, Angie’s exposition about the difference between “magic” and “sorcery” feels a bit like needless pandering towards the old anime adage that nothing fantastical can ever happen without some ridiculous explanation for it, though. It’s a bit out of place for a show all about Making Magic Magical Again, but mostly serves as set up for a core concept of The Ancient Magus’ Bride‘s lore: the conflict between ye aulde magicke and the that “science” thing all the young magicians are into nowadays — Clarke’s Third Law notwithstanding. Speaking of conflict, you are gonna change that bit where Chise gets called a sorceress just five minutes after they explained that mages and sorcerers are completely different things, right? Right, Crunchyroll? Hello? 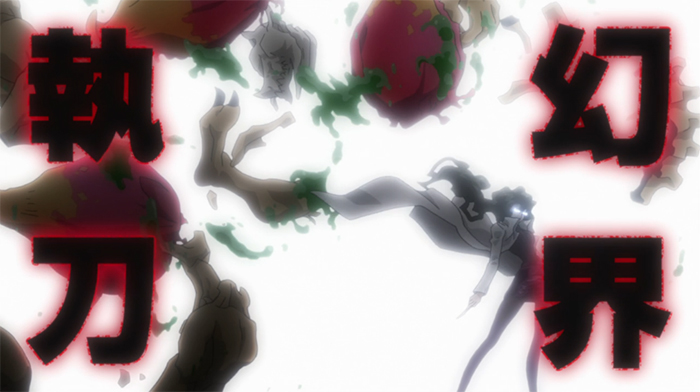 Blood Blockade Battlefront – If Dr. Estevez gets her own attack name, is she officially on the team?

Iro: We’re still feeling some fallout from the staff change, but this was still a solid episode. We’ve never gotten much more elaboration on what exactly transformed NYC into Hellsalem’s Lot, other than the business with White, and… we still don’t get much, which is for the better. It’s not actually important how it happened, after all, so a hand wave of “yeah this happens sometimes, and it’s real mystical” works just fine, and allows for a bit of wry comedy as the ever unflappable citizens ask “how are things outside?” I had honestly almost completely forgotten about the whole Blood Breed thing until it was actually happening, since I’ve never thought of that as the core element of the show, but it was a good reminder of why they keep Leo around and a halfway decent action bit, so I had more of an “oh yeah, that!” reaction than an “oh right…” one. And, of course, the pretty cool Dr. Estevez seems like she’s a new addition to the team, having a full special attack splash and showing up in the OP/ED. I’m not convinced we’ll see too much more of her considering how the show tends to focus on specific characters, but here’s hoping.

Jel: With all the good shows going this season, I’m real close to cutting Anime-Gataris. There was way too much talking this week and not nearly enough of the goofy charm we saw in episode 1. It’s not bad per se, but they are leaving a lot of potential on the table. We hardly got any time with our cartoon cat friend and there was no follow up on the weird beret thing. To their credit, I’m glad they assembled the club in one episode rather than stretch that out half the season. So now that we have a full cast maybe things will pick up. I’ll give them another episode or two to impress me, so let’s see how it goes.