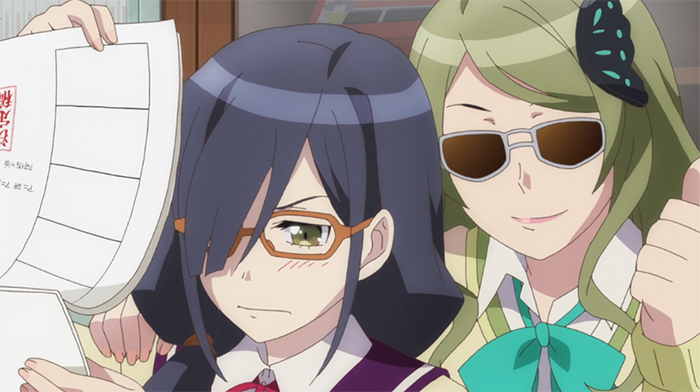 If you live in the US, chances are at some point today you’ll be super tired after stuffing your face with food and looking for a way to get out of talking to your family. Sounds like a good time to join the Roundup and talk about anime instead! Even better, there’s some really good episodes this week including what’s for my money the best episode of Osomatsu season 2 yet. So shake off that food coma and get in here.

Jel: I don’t wan’t to discount the first segment, which my head is telling me was the better half of the episode. Dayon trying to create God via Shin Megami Tensei fusion is the kind of bizarre, creative non sequitur I will sign up for any day of the week. That said, my heart was with the second half. Aside from making me question everything I know and believe by having Jyushimatsu meet the Girlymatsus (Jyushikyo was conspicuously absent), they found the weirdest but most strangely heartwarming way to bring back the girl who fans have been affectionately calling “Homura”. I thought it was odd Jyushi didn’t seem to remember her, but then I realized what is developing to be season 2’s most defining trait: there is no continuity. I suppose that has always been the case, but it seems like they are abusing that idea more than in season 1. That does give the creators unlimited freedom to make weird sketches like the brilliant ones we got this week, so even if we’ve had some duds along the way I’d say it’s worth it. 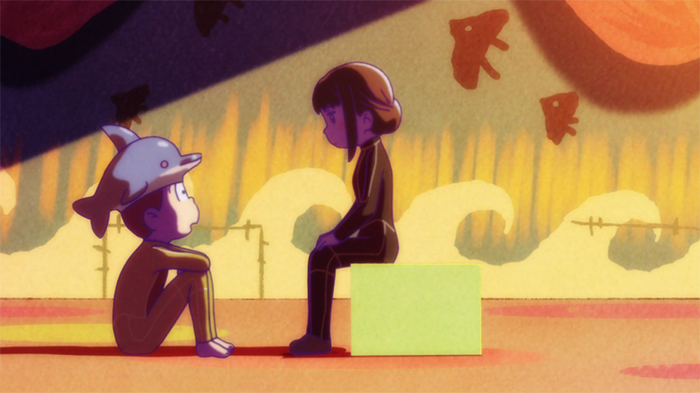 Mr. Osomatsu – Not the sequel to “Jyushimatsu Falls In Love” that I was expecting

Gee: I struggle to come up with much to say this week, which might be an indication of my feelings about the show. It’s not offensively bad, but it also doesn’t really do anything that blows me away either. Just as I mused about last week, Master shows up in this week’s episode, marking another semi-recurring character in Kino’s vagrant lifestyle. Largely in the form of a flashback, we learn a little bit about the woman who trained Kino to become the gunslinging survivor she is today. The story isn’t particularly interesting and without any Kino style twist to the narrative, it all sort of falls flat. Master gunning her way through a corrupt country should at least be exciting if nothing else, but action has never been Kino’s strong suit. As a result, you have a story that sacrifices its complexity for an action set piece that doesn’t have very good action. There’s nothing wrong with dropping all pretense and indulging in something big and flashy, but if you do so, you need to make it shine. If I’m on the verge of dropping Kino altogether, it’s not because of any particular sin it commits, but because it lacks the surreal imagery and narratives that the original anime wielded so effectively.

Aqua: Too little too late, Love Live! Do you honestly expect me to fall for this ruse again? Do you honestly expect me to believe the rules of time and space won’t collapse onto themselves once more to give Aqours the victory you like to claim they deserve? What kind of schmuck do you think I am? Credit where it’s due, even if the likeliness of Uranohoshi’s consolidation sticking is slimmer than the chance this show will ever acknowledge the existence of the male gender, at least we got to catch a few glimpses of pragmatic Chika again. Congrats on the character writing consistency there, Love Live!, but it won’t change the fact that your second season is now following the exact same plot arc as the first — and I fully expect it to betray me in the same sickeningly saccharine fashion. After four seasons, Love Live! has mastered all the tricks in the beginner’s guide to emotional manipulation and regurgitates them with no end in sight, to a point where Aqours seem to hit rock bottom and bounce back from it on a nigh episodic basis. Repetition is the only weapon left in the arsenal for its holy war on unbelievers like me, but then again, Love Live! has always preferred to evangelize according to the principle of “if you scream it loud enough, it’ll eventually become true!”. Never thought I’d actually say this, but I miss the days when this show was just a vapid attempt at comedy. 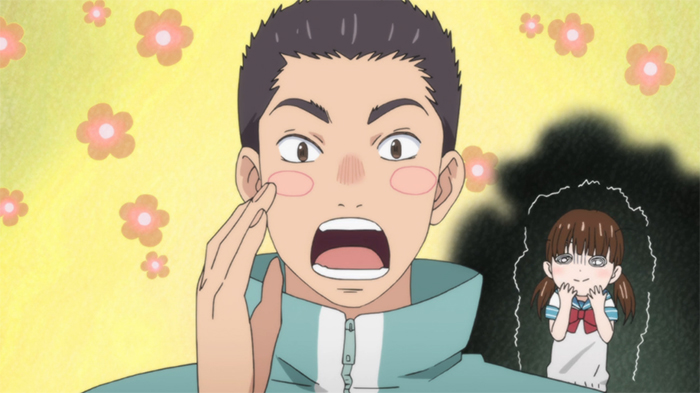 March Comes In Like a Lion – Takashi’s a good kid

Jel: It’s kind of cute how Rei is drawing motivation from earning money for Hina, but I do think he’s inching toward dangerous territory. It’s not his place to support her that way. If he really thought about how she feels he would realize she probably wouldn’t take his money, or at least figure out he should talk to her about it first. I believe the writer is aware of this and is moving him down that path to teach him a life lesson, but we’ll see. I have a lot of faith in March handling this topic as the past couple of episodes have been fantastic. The Takashi cameo this week was a particularly nice touch and the aftermath of his appearance again emphasized the complexity of the situation. And even if Rei might be a misguided, he is really putting himself out there and making sure Hina has someone to talk to. All in all this might be the best stretch of the series yet and I’m really loving every minute of it.

Aqua: Snappier pacing, stronger character work and a surprise cameo by Koh the Face Stealer make this into The Ancient Magus’ Bride’s strongest outings to date, as Chise and Elias investigate a string of grisly murders and the rumored appearance of a Church Grim surrounding it. Of course, things turn out to be not quite as clear cut as they appear, and viewers worried we’ve got yet another case of “cursed hot guy with tragic waif” on our hands, might be surprised at the resolution. More noteworthy in the grander scheme of things, however, is the formal introduction of Cartaphilius, the mysterious boy whose calculated mischief we already got a graphic glimpse of during the conclusion of Matthew’s arc. In a show about weird, hermeneutic magic, a practitioner without any sort of moral code isn’t exactly the most original villainous archetype to go for, but Cartaphilius’ overtly punchable demeanor and Faustian penchant for preying on the innocent and tragedy-prone make him into a more than compelling villain, especially when going up against the passive and empathetic Chise. Speaking of Chise, giving her some time to spend away from Elias was a wise decision indeed, and this episode finally dropped some hints that she’s starting to grow into a person with wisdom and agency of her own. Alice’s reappearance is a key factor in this, as her dedication to Renfred causes Chise to call her relationship to her own master into question. What if Elias wasn’t a good person? What if he didn’t ask her to reunite star-crossed lovers, but to hold a knife to someone’s throat? What if he didn’t make her out-of-season Christmas pudding, but roped her into a deal with the devil without telling her why? Would she still be as unconditionally devoted to him? Food for thought. 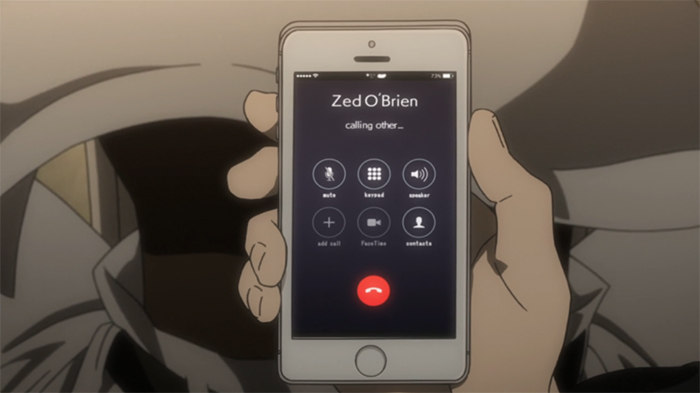 Iro: Everybody’s favorite fishman hasn’t gotten much spotlight (probably mostly since he wasn’t actually around in the manga for a lot of these episodes), and sadly that kind of continues to be the case even in what is ostensibly a focus episode for him. Again, the Quest for Chow was my favorite bit of Season 1, so I’m all for stuff happening that solidifies the idea of the ragtag bunch of dirtbags at Libra actually being buddies deep down. These sort of lower-stakes problems really help with getting to know the characters, and everyone gets to show off how badass they are compared to the relative normalcy of Hellsalem’s Lot. Dramatic battles for the fate of the world are all well and good, but honestly I get way more personal enjoyment about seeing the crew band together to make sure their friend can go to the New Year’s Party.

Jel: If Anime-gataris is a love letter to anime, having the cast make an anime themselves might be the most direct way to get their point across. The episode does a good job of balancing how much work goes into make even a three minute short with the looming threat of the student council and solid jokes like Sleazy Producer Erika-senpai. It almost feels like it should be the final story arc, particularly with the hint that the former anime club might have created the anime Minoa has been trying to remember. There’s still a lot of other unanswered questions like why does the student council president want to destroy the club and what happened to that magic beret from the first episode, so I suppose there’s still a lot of potential content to get through. For now, I just hope we get to see the full club project next week.