A lot of confrontations this week as Anime-Gataris gets weird, Osomatsu isn’t weird enough, and Bed Bath and Blood Blockade Battlefront and Beyond tackles… the challenges of being a working parent??? Also, March Comes In Like a Lion is still good. Read on!

Jel: With the bar extremely high for how far off the deep end Osomatsu is willing to go, I felt like this episode was a little disappointing. They did a good job switching up the style to more of a suspense/horror atmosphere but I think they could have gone further. The final showdown with Jyushimatsu was particularly disappointing as he’s usually the biggest wild card, and yet they didn’t really do anything with him. Maybe this would have worked better as a half episode segment rather than the rare full episode plot line we got. At the very least it’s good that these scumbags pay some consequences every now and then and I got a good laugh at their parents’ reaction to their fate. Overall an OK but forgettable episode. 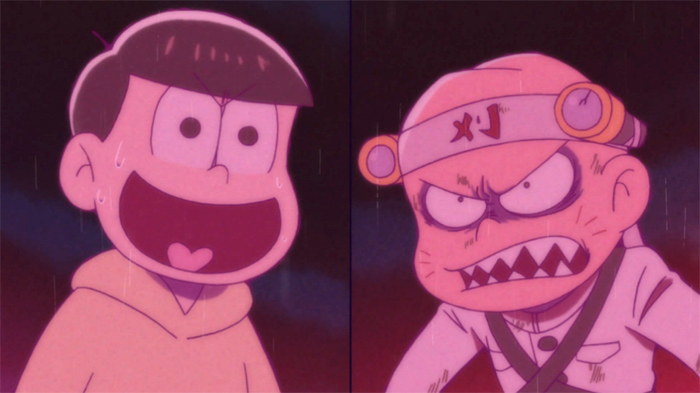 Jel: March has really been on a roll lately and this was another fantastic episode. It’s been heartbreaking seeing Hina still getting bullied and how it’s even affecting her physically. Unfortunately, that is probably the more accurate way of depicting the problem. I’m glad there hasn’t been any singular magic solution and they’re continuing to treat the topic with the respect it deserves. Between that and Rei thinking about Nikaido fighting for his life, it really raised the intensity of the shogi match and waiting for the results.

It all culminates in a final scene that is really cute, but did anyone else think Rei chasing her down was just slightly weird? I know it was completely innocent, but when you consider he’s an eighteen year old self sufficient adult traveling over to the next town to find a middle school age child without her knowing I don’t know… maybe it’s like how I felt about him saving money to help. He means well but I don’t know if it’s his place, at least not at this point in their relationship. I’ll stop there before I over think this and just keep enjoying March at its best.

Iro: Back in the days of Season 1, I heard this was one of the earlier cut stories, and I’d been kind of waiting for it ever since. I’m glad to say I wasn’t disappointed; this is probably the best episode (and episode title) of Season 2 so far. It hits that sweet spot between fun, cool, goofy, and heartfelt while also helping us get to know K.K. as a character. It’s a classic comedy bit for someone to be juggling two things at once and trying to keep one secret, but when was the last time those two things were attending Parents’ Day at elementary school and shooting interdimensional gangsters in the head? It works great, since through all of the crazy remote control sniper drones and super vampire power armor, fundamentally it’s still a story about K.K. being torn between her very important work and her very important family. Like last season’s infamous Quest for Chow, it’s a humanizing plot for a bunch of superhuman people, and BBB would be less of a show if it just had more fight scenes instead of episodes like these.

Jel: I should have figured a series with a talking cat would eventually escalate into some pretty weird territory, and sure enough Anime-Gataris does not disappoint. You could have written off Minoa’s rain soaked showdown with the principal as an artistic choice but I found it interesting they specifically had her go back to the office and confirm that it actually happened. Combined with the final cliffhanger, I think that all but confirms we’re in for some more bizarre, supernatural shenanigans. Throw in some more playful jabs at obsessive fans and I’m totally on board. I do have to make sure to mention the hilarious OP change this week that is a good example of Anime-gataris’ sense of humor. It’s completely deadpan and shamelessly self indulgement, but it still manages to be fun. I think it would almost be funnier if they kept it that way for the rest of the series without any further comment. We’ll see what happens next week.