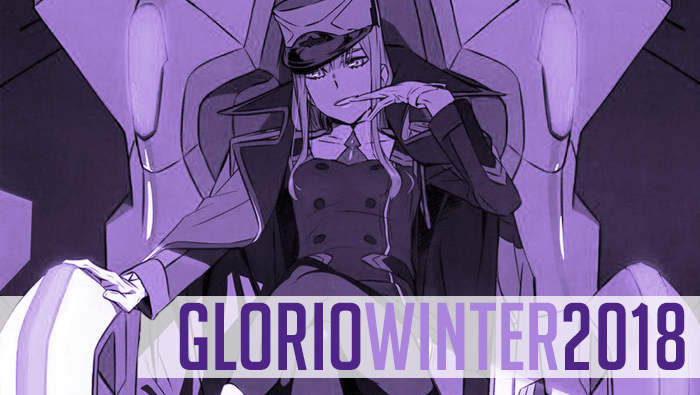 Yes, I know new shows are already starting and we’re already putting out first looks, but there are still a few shows to preview. Part 3 of our guide is headlined by Darling In the FranXX, a big name collaboration between Trigger and A-1 Pictures. We also have yet another Fate project, this time in the hands of the infamous Shaft director Akiyuki Shinbo. Will they be good? Maybe not, but definitely worth keeping an eye on.

Koi wa Ameagari no You ni

​Akira is a high school girl who quits the track team after getting injured. To fill her time, she takes a job at a restaurant and falls in love with her manager. “Sure,” I thought to myself as I read this, “that’s simple enough, could be good”. Reading further, her manager is a 45 year old divorced man. “Oh. That went dowhill fast”. So yeah, I suppose a lot of this may come down to how the grown adult man handles this situation, but any implication of a romantic relationship between a child and an adult three times her age sets off alarms. The trailer seems to be taking this all at face value, and that is a good place to start. I think the question here won’t be “is it creepy?” but moreso “how creepy is it?”.

How To Keep A Mummy

(Marlin’s Note: for some reason I could only find this trailer on CR’s German channel.)

​Sora gets a package from his adventurer father and inside is a tiny mummy that he has to take care of. I guess his friends also have weird little supernatural creatures too??? I… sure, why not. This appears to be more of a slice of life comedy type of thing so I assume it’s just going to be everyone hanging out and playing with their monster pets. The main guy looks suspiciously like a Digimon character, but I’m guessing there won’t be any monster battling. There’s not much more to go on but unless the comedy is really top notch I suspect this will be pretty forgetable.

​Tiny little fairy girls (I’m not sure if they are actually fairies but you know what I mean) live out their days in a tiny house in the forest. That’s about it. I feel like we have been getting a lot of these really well made, slow paced slice of life shows which is cool every now and then, but I’m getting tired of having several a season to sort through. The fantasy element here is a nice hook to spice things up, but if it ultimately just comes down to two girls doing their daily chores it’s going to be hard to keep interest. Of course the last show about fairies we covered totally shocked us, not to mention Lerche’s knack for picking stories that pull the rug out from under you. So who knows what will happen.

​In ancient China, an evil sorceress has taken control of the emperor and the word is on the verge of destruction. A group of warrior wizards hatch a plan to stop her. This is actually a reboot of a late 90’s/early 2000’s anime and it shows. I’d like to say “in a good way” a la the recent Ushio and Tora, but I don’t know if that will be the case here. I’m sure the big, dumb, colorful character designs and well animated action will appeal to some people but I didn’t like it then and I probably won’t like it now. Your mileage may vary.

​
A detective investigates a “killer of killers” that is shaking up the criminal underworld. I have no idea what that has to do with pork ramen, but sure, why not. The jazzy trailer seems like it’s trying to invoke other recent urban fantasy hits like Durarara and Blood Blockade Battlefront, but in this case I don’t get the impression there’s any “fantasy” here and there are no super powers. That means this will live or die entirely on a good plot and characters and that’s hard to predict until we see it. For now you can file this under “at least it’s not high school” and keep an eye on it when it comes out.

​And the winner of the “Most Anime” award for this season goes to… Beatless sounds like a pretty straightforward trans-humanist story with debate about how humanoid robots should be treated and the inevitable incident where they go crazy, making things more complicated. I mostly remember this series from seeing the original character art by Supercell alumni Redjuice, so it’s a bit weird (and maybe disappointing) seeing his art get translated to a very average looking anime. I’ll give it a shot but I’m not expecting anything new here.

​Yuuya goes to hang out with some friends and finds out they’re rapists, but fortunately the girl they try to pick up is actually a super powered animal-human hybrid that murders them all. Apparently there are other human/animals and they fight? I would be on board for some dumb, campy, over the top show about animal-people slugging it out, but I’m afraid the trailer is indicating this is going to be way skeevier than it should be. I suppose it’s been awhile since we’ve had a proper T&A focused battle show so if you’ve been wanting one of those, here you go.

Darling In The FranXX

​Anytime Trigger’s name is attached to a project it’s bound to attract attention, but it’s important to note that this actually a collaborative project between Trigger and A-1 Pictures. Before you start salivating at the thought of Trigger’s animation style combined with A-1’s big budget production though, the director’s only previous director credit is The Idolm@ster (which to be fair is very well directed, if anything) and the writer’s sole original credit is Plastic Memories (which was very bad). So at best, I think we can say we’re starting with a clean slate and not necessarily getting a shot of Hiroyuki Imaishi and co. injected into our veins. As for the plot itself, it sounds like a pretty standard “children piloting super robots save the world” setup and the trailer seems kind of slow and joyless. Still, there’s some sparks of action toward the end and I’m sure the Trigger half of this project is capable of breathing life into it. Definitely one to keep an eye on.

​Unlike most Fate anime, I have actually played Fate/EXTRA and I can tell you the story is indeed really dumb. Also, apparently the anime is going with the male protagonist option and that seems like a missed opportunity. That said, I kind of want to see this. The notorious Akiyuki Shinbo applying his style to the ridiculousness of the Fate franchise is a thing the universe needs, good or bad. Also Red Saber is probably the best saber… oh wait, did you want a plot summary? It’s like every other Fate: warriors based on historical or mythological figures fight it out in a battle royale for the holy grail. That’s pretty much all you need to know.