Rizu is great at science and math but wants to get a liberal arts degree. Fumino is great with writing and literature but wants to get a science degree. Caught between them is a boy who just wants a good scholarship, but to get it he has been charged with tutoring the two girls.

Jel’s verdict: The Title Says It All

I’m not afraid of dumb anime comedy premises, and this one is far from the worst I’ve seen. What made me want to scream watching this though was how we are expected to find the characters’ motivations believable, even heartwarming. That is not the case.​ 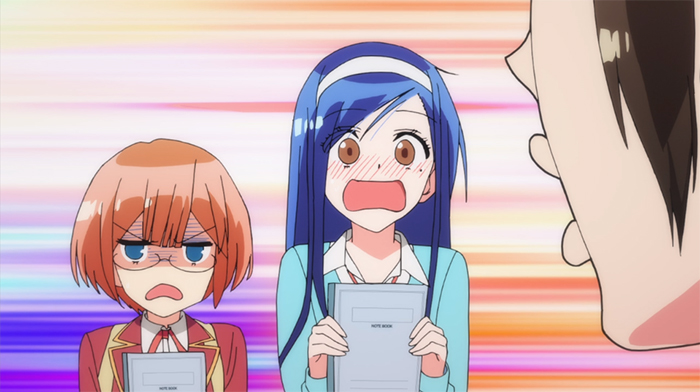 If you’re wondering, the two girls are being stubborn about their career choices because one of them doesn’t want to be told what to do, the other one really likes stars. That’s it. Seeing two amazingly talented young women blocking all progress on their lives for the most trivial, unrealistic reasons felt like nails on chalkboard to my brain. You can’t expect us to feel anything about these characters if they’re not believable as human beings, and the show fails miserably at that goal.​

Then we get to the harem hijinks which were extremely tame this week, but the OP and episode preview have me thinking that is bound to change. Look, if you want to ogle some anime girls fine, I will judge you silently in the corner and try not to bother you. I just have slightly more respect for a show that is open about it and not just trying to sneak it in where it doesn’t belong. Either commit to your story or commit to the T&A, don’t try to sell me both.​

None of these complaints are particularly unique to this show, which leaves me feeling there’s quite a bit of irony in the title. Truly we have learned nothing after decades of anime rom coms. I suspect I will have forgetten this existed by this time tomorrow.​

Being in the anime writing hobby for as long as I have, I know characters are usually meant to be larger than life. Still, there are some series that seem to have been written by bots trying to fake human communication. This show is in the latter category. Everyone’s motivation is completely laughable, and in no way do their struggles seem like something actually worth caring about. It doesn’t help that it seems like the entire plot of this show is something we already saw last season. I thought we’d finally bucked the tired harem genre in general, but it seems like anime has run out of ideas and is just recycling the same things we had at the end of last decade. I’ll also take a moment here to lambast the laziest of writing tools, Dead Parents. Dead Parents: when you can’t be bothered to give any real definition to your milquetoast character’s personality, try Dead Parents.