The world faces a terrible threat in the form of Deadmans, a terrorist cult that aims to bring out humanity’s ‘inner demons’. Fortunately they’re opposed by the government organization Fenix, who possess a secret weapon – Ikki Igarashi, a young man who is able to hear his own inner demon. Together they’ll battle Deadmans as the twin warriors, Kamen Rider Revi and Kamen Rider Vice!

Zigg’s verdict: The Devil in the Details

As we state pretty much every year, it’s tough to get real insight into a toku show from the first episode because they inevitably tend to be highly formulaic exposition dumps that try and cram in as much attention grabbing toy advertising as possible to hook the kiddies. That said, you can generally get a pretty decent gut feeling of tone and direction, and the feeling I got from this opener was largely positive. That’s an immediate relief, given how immediately offputting Kamen Rider Saber‘s premiere proved to be, and the unfortunate show which preceded from there.

Instead, with Revice Toei have gone for the tried and tested route of cannibalising some of your older shows to help build you a new one.  So we’ve got an ancient, bestial enemy with overtones of Kuuga, goofy demonic possession straight out of Den-O and an even more literal take on two-riders-in-one than Double managed. To be clear, this isn’t a criticism, just an observation that the company appear to be retreating to slightly safer ground after the, er, ‘divisive’ reputation Saber garnered. What’s most important though is that the episode does a good job of introducing us to our main cast, and even better I don’t immediately hate them! In fact, there’s considerable charm to the ensemble, and the actors seem to have a solid rapport that sells the family dynamic well and makes me interested in spending more time with them. I’m pretty certain we’re going to get some juicy drama between Ikki and his un-chosen brother, and being able to see strong potential character arcs like that straight out of the gate is a good sign.

Aesthetically this episode is a little more mixed. I can’t say I’m particularly fond of the designs for either Revi or Vice – the washed out pink is an especially weird choice for a primary colour, and the belts and stamps are chunkier and more blatantly toyetic than ever before. The villains’ Day of the Dead theming is absolutely spectacular but already comes dangerously close to being too silly to take seriously, and that’s an extremely high bar in this genre. Still, there’s also some outstanding action on display here, with Revi kicking a mook’s head through a concrete pillar an undoubted highlight. The snazzy, definitely not paramilitary force also has a nicely unified style that suggests someone was keeping an eye on visual consistency.

Revice is officially the show which will commemorate 50 years of Kamen Rider, which means we’re gonna be hanging out with this crew a lot in crossovers, movies and special events. I think it’s fair to say going in, that prospect had me concerned, but after this twenty-something minute slice I’m more cautiously optimistic. This is a good first step, now it’s time to see if it can be built on to make Sunday mornings worthwhile again. 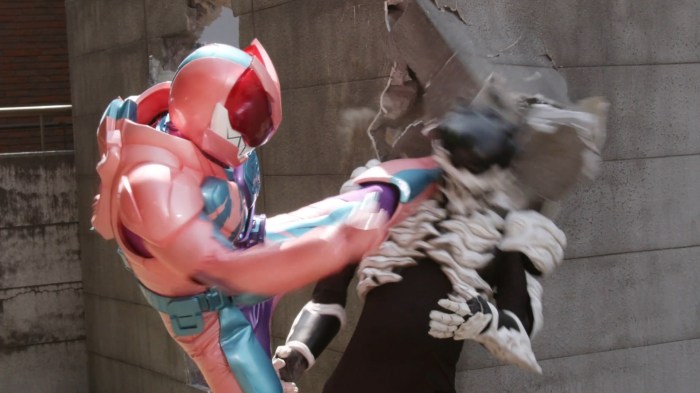 I am not going to pretend I watched more than ten episodes of Kamen Rider Saber, which is frankly more episodes than it deserved, but I did tune in to the last two episodes just to see what was up. They sucked, I don’t regret dropping the show, and I am glad it’s finally over. In anticipation of potentially getting my Kamen Rider fix back, I’d been keeping on top of the trailers and toy reveals for Revice, and went into this episode with high hopes. And hey, there’s a lot to like!

We get a cursory introduction to the supporting characters, some fabulous and very camp villains in extravagant Day of the Dead costumes, and an interesting dual-rider dynamic between Revi and Vice. It may not have been as impactful as Zero-One‘s opener, and there’s plenty more work to do in the upcoming episodes, but early signs are good. I sincerely hope Revice keeps it up.