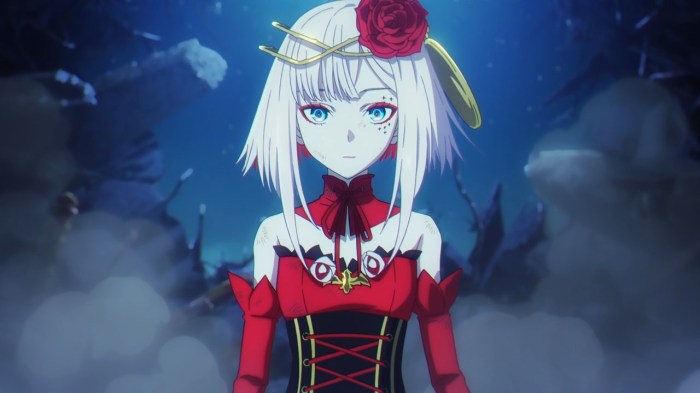 In the 2040s, music is lost to humanity because it inevitably lures dangerous alien creatures called “D2”. The only thing capable of defeating them are super-powered young women with the power of music – “Musicarts” – and their magically bound handlers – “Conductors”. The Conductor Takt and his Musicart Destiny (who holds the power of Beethoven’s 5th Symphony) travel across the United States, righting wrongs and playing songs on their way to New York.

I had low expectations going into this mobile game tie-in, but they were solidly exceeded. Studios M&M bring the heat on the animation end (action director Toru Iwasawa is known for work on Black Clover and the Fate franchise, among others), with a Panty and Stocking-esque bit in the middle of the episode standing out as a fun diversion. The characters themselves are well-trodden anime cliches – the snarky monotone girl who devours sweets, the disaffected-but-generically-quirky protagonist, the beleaguered big sis – but it’s nothing overly egregious, particularly given the setting. I’m a sucker for anytime anime is set in the USA, fake or otherwise, since we get to see all sorts of wacky stereotypes and misconceptions; the diner in the first episode here would be a relic by the end of the 1900s, let alone the mid-2040s. Writer Kiyoko Yoshimura also penned Glorio favorite and Fake-America showcase Garo -Vanishing Line-, which gives me hope that takt.op won’t take itself too seriously.

I had a surprisingly good time with this one – the more I watched, the more I enjoyed. This is perhaps partly due to my fairly low expectations going in, considering how similar the story sounded to the travesty of an anime that was Listeners, but it’s important to note that Destiny did impress me in its own right as well. There was a really great balance of seriousness and humor going on here, with some genuinely funny one-liners and an excellent sense of comedic timing. If the exposition was a little clunky here and there, I was happy to overlook this as the episode progressed, especially given the overall solid pacing and fun character back-and-forths.

I also greatly enjoyed Destiny‘s portrayal of a futuristic real-life America. We haven’t had that many actual place names shouted out yet (although the scenery makes it look like our characters are currently making their way through somewhere like Nevada or Utah), but I sure hope they do eventually make it to New York because I am absolutely here for that. Needless to say, I’m also down for as much top-tier Engrish that the show feels like throwing out (“Shuddup!”). I don’t honestly know if I’m hoping more for something that tries for realism and (basically) succeeds, or for something that doesn’t try very hard at all and fails with great enthusiasm, but either way, count me in for more.