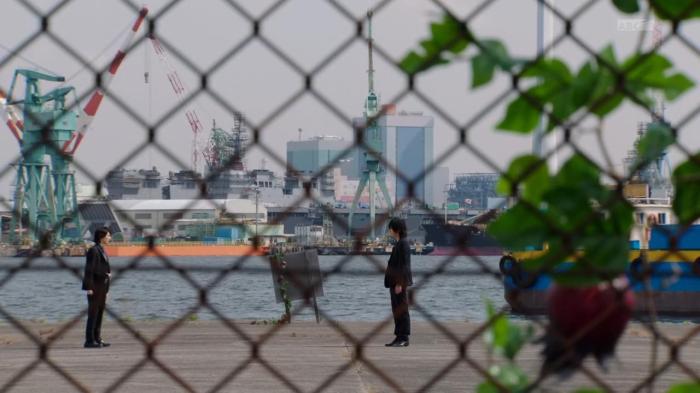 The truth finally emerges as Mitchy reveals himself to Kouta, then attempts to finish off Takatora once and for all.

With these two episodes Gaim finally reaches the climax it’s been building up to for several episodes now, and fortunately it delivers in almost every possible way. The entire saga of Mitchy has been a great example of how to slow burn character development, and this is the culmination of his transformation from nice kid into jerk, as he systematically destroys the relationships that mean the most to him. First Mai, then Kouta, and finally Takatora, he burns his final bridges with all of them over the course of these episodes, and it’s mesmerising to watch.

The Mai scene is especially intriguing because she’s the character Mitchy has probably held in the highest regard for quite some time now. It’s a great piece of back and forth dialogue piece that reveals some really important snippets of info about both characters. To me, the key moment is when Mai reveals that it’s not Kouta she believes in, but the hope that he represents. It shows she isn’t necessarily playing favourites between her two best friends (which the deluded Mitchy automatically assumes) but rather that it’s Kouta’s never say die philosophy that causes her to take ‘his’ side. In just one brief scene we re-affirm Mai as her own character with her own decisions, reinforce how Mitchy self-centredly sees the struggle as a personal conflict between he and Kouta, and firmly re-establish Mitchy’s ultimate goal. Not too shabby huh?

By comparison the much anticipated Mitchy/Kouta showdown is almost simplistic, yet still deliciously satisfying. Mitchy basically lays on the table what we’ve been seeing between these two from the start. He idolised Kouta at first, but then became frustrated when his hero didn’t live up to his own expectations of what ‘strength’ really was. What’s important here is that we’ve seen Kouta genuinely grow as a character, becoming a better hero and stronger person. It’s only it Mitchy’s eyes that that strength is weakness, and that compassion an inability to do what’s ‘necessary’. The rant about how ‘hope is a disease’ is chilling and the entire thing is filled with cold-hearted glee. How visceral was that kick to the head? They don’t over-sell the revelation of Mitchy as Melon Energy Arms either, instead wisely letting the actors tell the story with subtle(ish) reactions.

Finally there’s the Mitchy/Takatora conflict which runs throughout most of episode 36. We’ve talked a lot about how these two are an example of parallel character evolution, but finally having them face off against each other was also a great chance to show what makes them different. Yes, Takatora was once a cold-hearted pragmatist like Mitchy now is, but his actions were rooted in the genuine belief that there was no other way. By contrast, Mitchy knows that there’s a chance, no matter how small, that Kouta could succeed in his quest to gain the Forbidden Fruit. But he’s so bitter and so set in his ways he refuses to even acknowledge that, whereas Takatora leapt at the very first opportunity to escape his Ark plan. The other major difference is responsibility. Takatora here acknowledges that it’s partially his fault that Mitchy is like this, that he was wrong to be cold and distant and to keep his brother at arm’s length. In facing Mitchy down he’s taking responsibility for his past failures, whereas Mitchy can do nothing but run away from his faults. I’d be impressed if this really was the end of Takatora, but I’m unconvinced – that sendoff wasn’t nearly spectacular enough, and there’s still a lot of story you can extract from these two.

That’s a lot to take in, but then if there’s one thing Gaim has proven it’s that it’s a show that’s not afraid to tackle the big themes. For us, the viewing audience, that’s been nothing but a blessing.

For once I don’t need to come up with the long-winded character analyses, because Kamen Rider Gaim is doing me the favour of making them very apparent itself. Strong, cathartic dialogue marks the culmination of Takatora’s character arc, making this episode so much more than the much-anticipated showdown between the two Zangetsus. Basically everything that came out of Mitchy’s and Takatora’s mouths this episode hit like a jackhammer, establishing how much of a caricature of his brother Mitchy has become. In fact, he has become what he thought his brother was way back when he started telling Kouta to stop using his driver in the show’s early tens: a megalomaniac who thinks he can singlehandedly decide over the fate of the world.

The difference between the two is that Takatora has always suffered from his enforced pragmatism, whereas Mitchy thinks he’s doing everyone a favour. Takatora is pragmatic by necessity, Mitchy by conviction. See his crush on Mai, for example. Mitchy tries to pursue her not by being romantic or sweet to her, as an idealist like Kouta would, but by creating a situation in which the most favourable pragmatic option for her would be to be in his good favour. This is also exactly why he thinks Kouta’s idealism is a scourge. It inherently contradicts what Mitchy’s entire life has been about, whereas for Takatora, Kouta serves almost as an example. When confronted with the horrifying results of his ‘education’ methods, seeing the man he could have become, or could have raised his brother to be, the elder Kureshima brother realizes he has essentially already lost. That’s why I won’t be surprised if it does turn out he’s really dead.

In any case, Kouta has finally realized that Mitchy is working against him, and Kaito calling him out on his bullshit when he still refused to believe his friend had turned on him was a pretty great scene. Sure, Kaito could have spared everyone a lot of problems by coming clean about it from the moment he found out, but keeping it from Kouta and forcing him to figure it out for himself is exactly the sort of thing mister social darwinist would pull off. In fact, it might even turn out to be better in the long run, now that Kouta has been liberated of his relentless naiveté. The little scene between Kaito and Mai was brilliant as well, showing off just how much the former has mellowed out, while still retaining the essence of his character. His injury at the hands of Redyue is just one of the many threads Gaim leaves hanging, but once again, we won’t get the answers for another two weeks. Darn movie tie-ins!