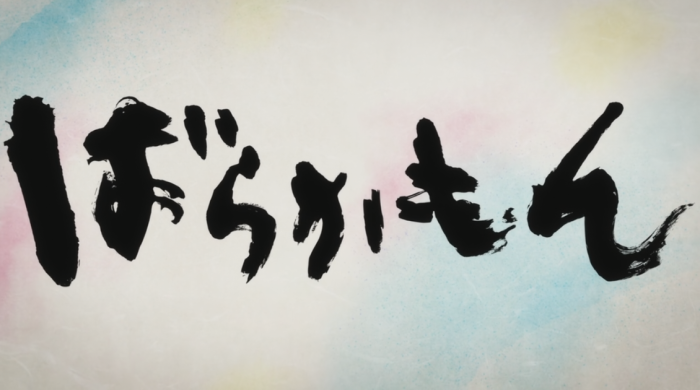 Handa Seishuu is a young practitioner of the ancient art of calligraphy. After an insult caused him to assault a senior citizen, he retreats to an isolated island town to focus on his work. Once getting there, he meets a young girl who quickly takes a shining to the new resident. Marlin’s verdict: Yes It Can

The episode is done and I’m still not sure exactly how I feel about Barakamon. The show has all of the classic trappings that make up likeable slice of life shows. Lord knows there’s enough no-nonsense grownups questionably saddled with peppy little girls out there. Naru certainly has the peppy down pat. There’s a lot of the youthful innocence that makes the Yotsuba& series so appealing. Her voice is also so full of energy without getting too grating or squeaky. There is even some foreshadowing to some deeper storytelling as we get to know more about her. If you notice at the end, we never do see Naru’s parents even though it’s explicitly stated everyone in town has come to see Handa. Handa himself has what must be one of the most niche jobs ever. I understand there is still a high cultural value put on good calligraphy in Japan, but the idea of the style of someone’s writing being a job will always be a very foreign concept to me. The show does a good job of showing that Handa isn’t just some hothead, that he understands his problems, but does not yet know how to address them.

What will make or break Barakamon is how it executes its tone. The show relies heavily on the typical feeling of community that comes with rural living. It’s a very worn concept in Japanese media, but executed well in the way Handa is treated as he enters this new, strange life. If it can evolve the concept while keeping things entertaining, I could see me enjoying this show thoroughly. Still, I wouldn’t mind if we start to get as much food for thought as slice of life antics in the weeks to come.

This is not the 80% of anime that focuses on the shenanigans of high school kids trying to find their way in life. This is an anime about calligraphy, that Japanese art of making ultra fancy fonts with extravagant arm movements and giant paintbrushes. It’s an unfortunate reality that the general theme means this isn’t going to be seen as much as some of the other shows.

That’s just the way it is at the moment, but let’s not get upset about it until we know if the show is good or not. As far as first episodes go, Barakamon does a pretty stellar job at selling the idea that a calligraphy-based anime might actually be an interesting watch. This intrigue stems, I think, from last season’s Ping Pong, which turned out to be a rather great character drama with ping pong in the background. That’s what I’m predicting will happen in Barakamon; a calligraphy story that is pushed to the background, while Handa evolves as a character with the influence of Naru, a hyperactive young girl. One of the things that I really love about this show are the designs of the two protagonists. They’ve gone for a sense of realism, so there’s no unconventional hair colours or styles, but rather their personalities are brought out in their simplistic designs. Handa’s is most obvious, with shaggy hair and drooped eyes that show a real sense of the stress he endures while doing his calligraphy. It was hinted early on that he may not even enjoy his job, so we’re looking at a guy who may no longer feel the fun in his craft. On the flip side, we have Naru. She wears clothes typical of a kid her age, but with the addition of a bunch of rope on her belt. The rope might not even have a practical purpose, but you’ll see quite quickly when she’s running about what they were going for. It’s a perfect substitute for a big bushy tail, which is a perfect fit for Naru and her cub-like playful personality.