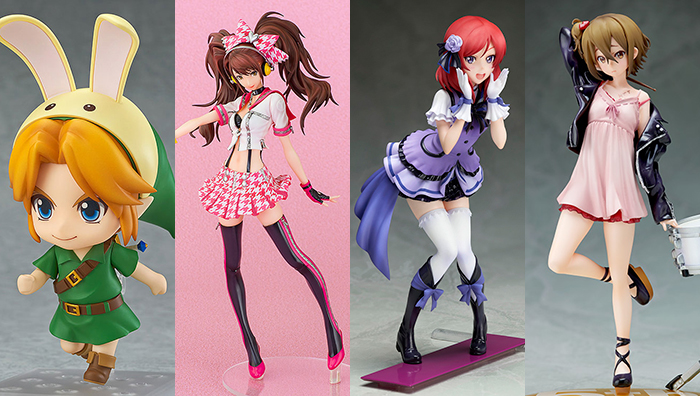 Hello, and welcome to All Your Monies, where The Glorio Blog’s resident toy and figure collecting crew (and Iro) will run down the last week’s new pre-orders, turning a loving or scathing eye over what’s been put out for you to spend your hard earned cash on. This week we have bunny hats, leather jackets and big hair. It’s the 80’s all over again. 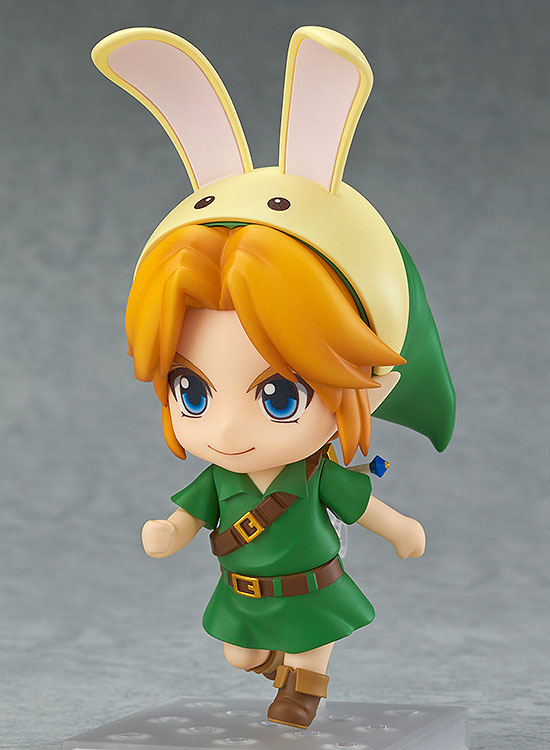 Zigg: That bunny hood is everything. It is all I desire. Objectively this is good, but not as great as GSC’s previous Wind Waker version of Link, who fit the Nendoroid proportions more naturally. But that hood. I need it.

Jel: While I don’t have the same soft spot for Majora’s Mask as my colleagues, I do appreciate what’s going on here. This particular Link comes with an impressive amount of accessories, and considering we’ve only seen a Wind Waker version up till now I’m sure there’s high demand for the more traditional look. Would I prefer an even more classic rendition with a boomerang, bow and arrow, and maybe a mini Epona? Sure, but it’s still cool to see GSC going for a little bit of a deeper cut, even if it is just a tie-in to the most recent Zelda release.

Iro: Majora’s Mask is perhaps my favorite Zelda game of the bunch, and the Bunny Hood alone would make this an insta-buy if I collected figures.

Euri: I still think that Toon Link better suits Nendoroid proportions, but this is nothing to turn your nose up at. If nothing else I’d certainly pick this up to support Nintendo allowing their characters to be squished down to table ornament size. Also the bunny hood. 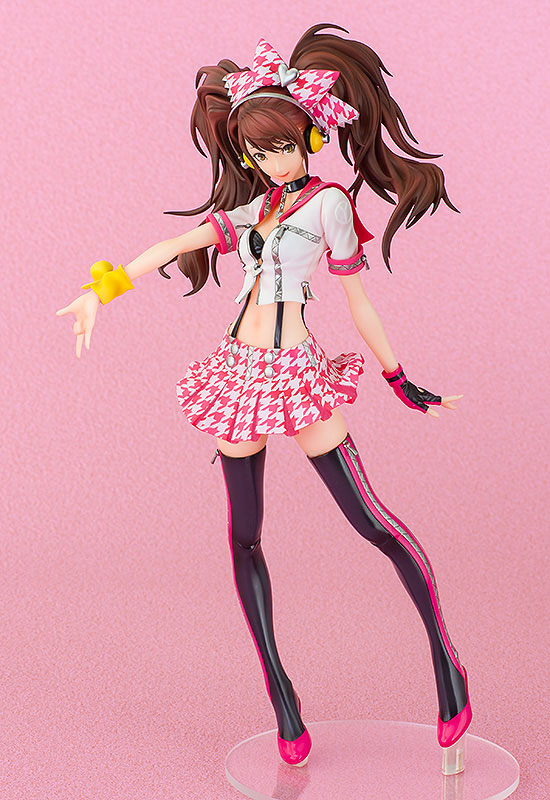 Zigg: Rise’s idol costume is a taste-defying concoction of bad, revealing cloth cuts and horribly clashing colours, and the sculptor seems to have done his best to turn her into a CLAMP style noodle person as well. Definitely not a big fan.

Jel: As much as I love my Persona 4 waifu of choice, her Dancing All Night idol look isn’t really doing it for me. The increased skin exposure probably could have been a lot worse so I’ll toss that aside for now, it just offends my design sense. The colors are loud and obnoxious, those zippers are poorly sculpted and placed weird, and the one glove/one ribbon asymmetrical thing is driving me crazy. Still can’t wait for this game though. On a side note, I would totally be on board with a figure of Rise working at the tofu shop, which is when I really fell in love with her… well you know, not really in love, just for the game purposes of course…

Iro: I was never a huge fan of Rise’s idol getup, and this doesn’t do much to change my mind. The real question on my mind is: was her hair always that huge, and I just never noticed it?

Euri: This reminds me a lot of that Project Diva Miku that found itself into Sega arcades back when that game first release. Neat pose, giant hair and impossibly shiny legs. I don’t understand the appeal of the leg shine, and honestly it’s a bit of a deal breaker. Or rather, it would be if I wanted this to begin with. Teddie best girl. 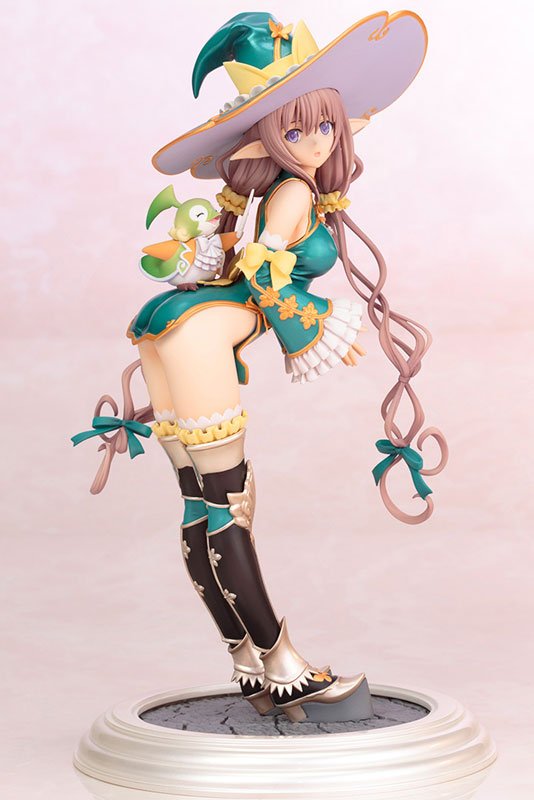 Zigg: Every Tony Taka figure is the same – nice sculpt, inappropriate and unnecessary level of sexualistion and cookie cutter dead-eyed face. For what it’s worth the quality seems up to the usual high standards of Kotobukiya. But man, that bird! Give me a figure of that bird, he looks like a baller.

Jel: I guess good ol’ Tony is running out of ideas as this is one of the weirdest Shining figures yet. It’s like a grab bag of ideas: let’s see, they pulled out a witch hat, a Chinese style dress, weird dumb hair braids and… a bird conducting an orchestra? It might actually be interesting if it wasn’t for the back breaking sexual pose and the trademark blank dead Tony Taka face, but those things are there so I’d have to say pass. At least there’s some hope we may see some more creative designs from the series in the future.

Euri: Excuse me miss there appears to be a quaver on your butt. 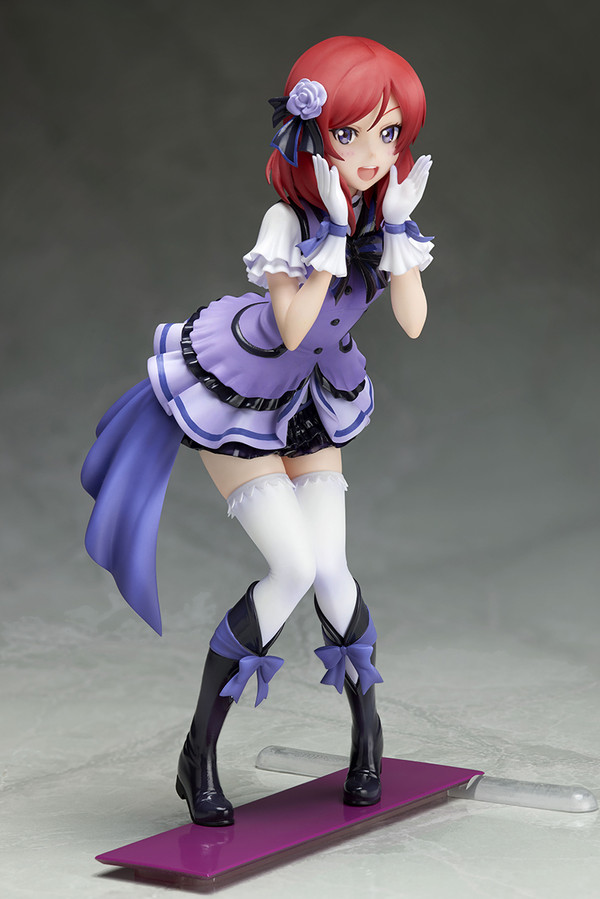 Zigg: Every single Love Live girls is the same, every single oone of their flamboyant idol costumes is the same and every single figure of them is pretty much the same. That’s not to say this is bad, or indeed even unpleasant to look at, but my interest level is so far below zero it’s difficult to articulate.

Jel: Alright, if you held a gun to my head and made me pick a design from the super boring, same faced Love Live girls, I would probably choose Maki. So this is actually a pretty lovely figure. The sculpt is decent, the pose is fun, and the purple outfit looks great with her red hair. What really interests me though is the full base not pictured here (check the link), which is supposed to be the letter “I” in Love Live. Based on the concept art for this line and the other figures we’ve seen, the entire collection is going to look amazing as a whole. I really don’t like Love Live but I’d like to see that just for the spectacle of it.

Iro: I actually like this outfit, although I’m not sure if she’s supposed to be shouting or clapping. Also, judging from that skirt length and that pose, her butt would be completely exposed. Bleh. 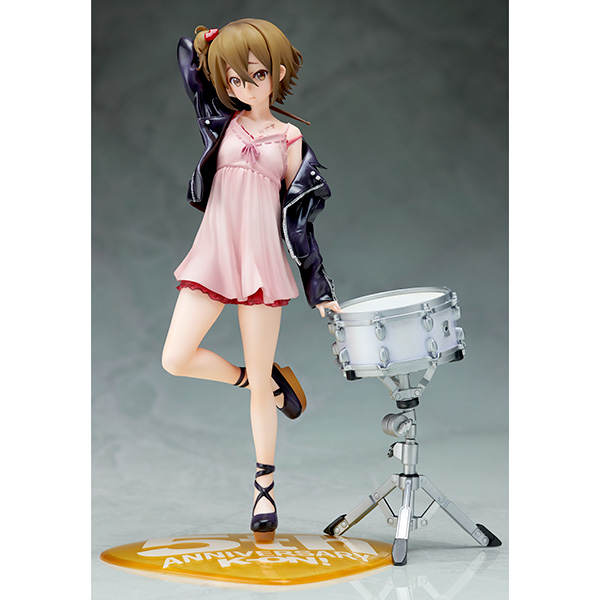 Zigg: I really like what they’re going for here – the very un-Ritsu babydoll dress clashing with the punkish leather jacket. Problem is, it doesn’t quite come off. Th pose is odd and the expression dull and unhappy, which couldn’t be more unfitting if it tried. A sadly missed opportunity, although props for making the world a better place by making a figure of hair-down Ritsu.

Jel: Has it really been 5 years since K-ON! happened? I’m not ashamed to admit I really liked the series and I really like this line so far, as well as any designs with Ritsu putting her bangs down. I do kind of wish she didn’t look so unhappy though. Otherwise, I love the contrast of the cute pink dress the super punk rock leather jacket, not to mention continuing the giant guitar pick base in everyone’s image color. I’m assuming the amazing Captain Mio is going to be next, so I’m looking forward to seeing that.

Euri: This is the coolest Ritsu has looked and will ever look. But who cares when we still haven’t had a dedicated figure of the best K-On! character, Ton-chan.