Hello, and welcome to All Your Monies, where The Glorio Blog’s resident toy and figure collecting crew will run down the last week’s new pre-orders, turning a loving or scathing eye over what’s been put out for you to spend your hard-earned cash on. After a brief hiatus (end of year content takes a LOT of time guys!) we return for the first round-up of 2016

Zigg: Screw you Skyward Sword figma with the weird lips, this is how I want my Link to look – tweeny, cartoonish and with those dumb forelocks that look kinda like super long sideburns. The extent to which they’ve captured the wonderful art style of A Link Between Worlds (and consequentially of A Link to the Past) is uncanny and makes for just an utterly adorable version of our elfin hero. A word of warning though – there’s two versions of Link available, the regular version we’ve listed here and a ‘DX’ version which is exclusive to the GSC store only. I was fine when it was just one little add-on part you got for ordering direct, but putting a ton of cool items and accessories behind an exclusive is super not cool.

Jel: Link is pretty much the perfect figma seeing as he has a wide variety of options for action poses and accessories. So I’m totally cool with getting more versions of him, particularly this deliciously retro take on the deliciously retro Link Between Worlds. The more cartoonish look adds a lot of fun to the figure and warms the nostalgia part of my cold dead heart.

Timmy: Its great to see Link getting more love and I am really digging his more cartoony style this time around. I am a little torn though, on one hand its great that Max factory has offered a cheaper version with less accessories, but making the full figma exclusive raises the cost for it considerably. Still, he looks pretty great and is no doubt tempting.

Zigg: I always like seeing old franchises come back for new figures, but come on, not like this. Yoko was always a super cheesecake-y character anyway but at least pretend to have her as an action girl? These gigantic bunny girls are pretty much selling to existing collectors now anyway so I can’t really get too upset, but come on, where’s my Simon figure?

Jel: Does FREEing not have enough current Animu Babes to keep their never-ending line of massive creepy bunny girls going and now they have to tap into a NINE YEAR OLD (yeah let that sink in) series to drum up sales? Well I guess Yoko never really goes out of style per se, but as always with these things, eww gross.

Timmy: Freeing makes another bunny girl, the world spins round, so on and so forth. Still I am a little surprised it actually took them this long to make a Yoko. She looks fine for basically looking like every other bunny girl, though I do like all the effort put into her hair. What I find really gross about this though is that bloody price. Why the hell is this so expensive?

Zigg: This is here less for the figure and more to highlight that FREEing has finally decided to take on Wave at their own game and produce a line of miniature swimsuit figures. Granted, they’re even smaller (1/12, which is figma size!) but crucially they’re also cheap, as opposed to the comical prices Beach Queens have inflated to. Miku here seems fine – I like the swimsuit colour-coordinated to match her hair – but really this inclusion is more about news than an actual product.

Jel: FREEing, you are not having a good week on AYM. I guess there’s nothing wrong with this, it’s a well sculpted Miku in a cute pose with a nice smile. And that’s about it. The decision to make her swimsuit color identical to her hair only makes it more boring. Also wow, get this girl a hamburger, she looks a lot thinner and paler than usual.

Timmy: It’s nice to see FREEing start a small-scale swimsuit line of their own with Wave and their Beach Queens line spiraling out of control price wise. I do have some concerns though, mostly in the quality department, but for 20 bucks I would say it is worth taking a gamble on them if you are interested.

Zigg: It’s the first time in a while we’ve seen a male figma and the first time in forever when said male figma is not a teenage boy with enormous hair. I’m in favour of both of these trends, so I’m very much in favour of Kazuma here. Granted, he’s pretty understated compared to most figures we feature but he’s become iconic enough it’s nice to see him join the line, and the sculpt is good at capturing his effortless throwback cool. I’m a fan.

Jel: Someday I will play a Yakuza game and truly appreciate the fact that we somehow got a figma of this guy (or the fact that they keep making Yakuza games). For now though, he’s just a mean looking dude in a gray suit as far as I’m concerned. I feel like they are playing it too straight, like maybe some of the accessories should give a nod to the games more silly aspects. I can at least say those are some great shoes though.

Timmy: I have yet to play the Yakuza games so all this is to me is a cool dude in a suit smoking a cigarette. And I am ok with that. As usual his joints are worth pointing out but otherwise I think he looks great, plus a golden gun is always a cool accessory.

Zigg: I was a big fan of the Racing Miku 2015 design to begin with so to see it pimped out like this is a treat, and GSC always tend to deliver big on large-scale, highly detailed figures like this. No matter how many times they do it I never tire of the fading translucent effect on the hair tips and the bright orange skirt is a welcome splash of colour to something which might otherwise be a bit pale overall. The flag is huge and impressive but I’ve perhaps got a few reservations about so much effort and size being expended on something so relatively simple and unessential to the figure. Still, a striking package overall.

Jel: OK this is a much more interesting take on MIku. I mean, she’s had so many figures over the years that in 2016 I only want to see something completely bonkers or at least technically ambitious like this figure here. Miku herself looks great in her hi-tech robo corset thing and AMAZING hair, but the real eye catcher is the flag. I guess my only complaint is that it’s part of the Racing Miku thing and I really don’t care about Racing Miku. Still a nice looking a figure nonetheless.

Timmy: Miku’s cute face and that awesome hair defiantly are standing out to me here and while that flag is cool in theory, it presents some pretty severe spacial issues. Though she SHOULD still fit in a detolf if the height is accurate. The rest of her outfit is also pretty interesting and the design of the base is nice so in the end you have a really great Miku at a reasonable price, if you don’t mind the fact her butt is showing. 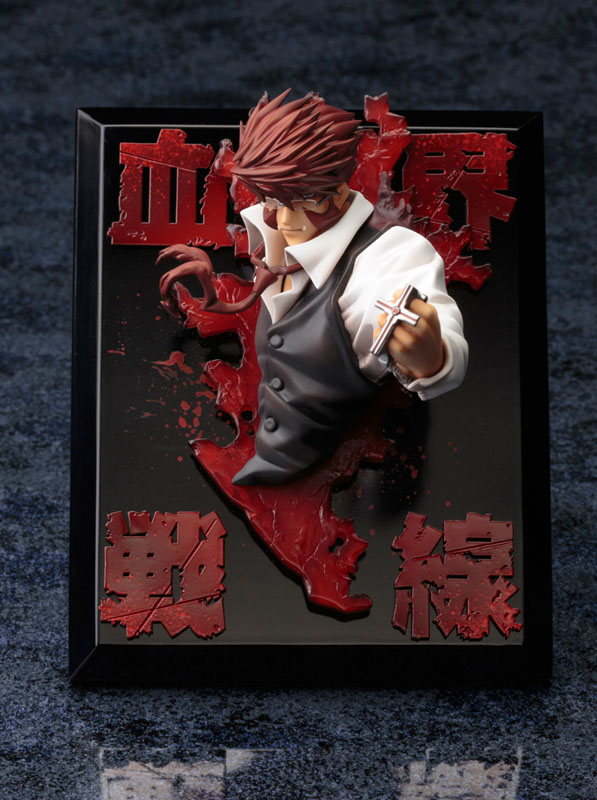 Zigg: I like the basic idea and an attempt at something new and different is always good, but if I bought this I’d kind of feel short-changed to be honest. It’s half of an excellent figure and half of a weird attempt at an innovative display solution I’d guess? I think this’d be ifne if Kotobukiya had already released an actual figure but as it is this feels like a gimmick. At least you’re not paying full price for it.

Jel: Hmm. I appreciate the attempt at doing something different here and Klaus is pretty rad, but I think I would have preferred a normal full size figure. The plaque thing just looks kind of tacky, particularly with the giant red kanji on it. Kind of disappointing considering our odds of getting a Klaus figure were slim to begin with and I don’t know if we’ll ever see a nice, full size version, but hey at least we got something?

Timmy: I certainly like the idea and in practice it seems to work well. I have to wonder though why they decided to go with this instead of a full figure. Ah well, still pretty cool.

Zigg: A very cute, remarkably understated figure of a form which normally only appears in battle, I like this a lot. matt even has his edgelord harmonica present and correct. Too bad that this is yet another Megatrea Online Shop exclusive, which of course means a silly price. A real shame too, since I really like it.

Jel: YOU KIDS AND YOUR DIGIMONS, THAT’S ALL I HEAR AROUND HERE THESE DAYS, GET OFF MY LAWN

Timmy: Pretty much what Jel said. (Though this is pretty cute.)