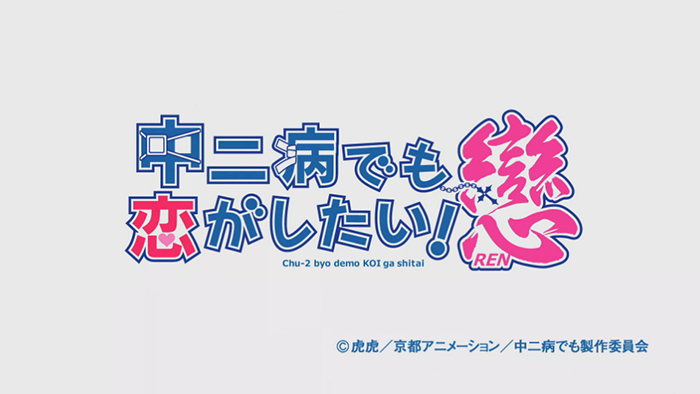 It’s a new school year and that means big changes and fresh starts for the Eastern Black Magic Nap Society of Summer. Has Nibutani finally gotten the best of Dekomori? Will Isshiki get Kumin-senpai to notice him? Are Rikka and Yuuta LIVING IN SIN?!? You probably know the answers. 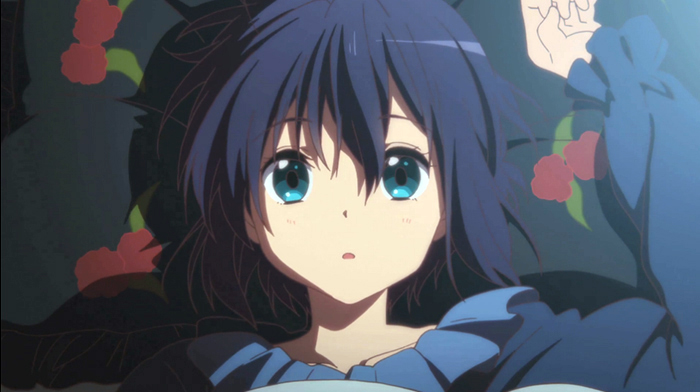 Considering how well the first season wrapped things up both plot wise and thematically, I’ve been consistently on the record that there’s no reason for a new season of Chunibyo to exist. It makes this forced plot reset episode, with its highly implausible apartment swapping and severely irresponsible parenting, that much more difficult to swallow. It would have been more acceptable if Rikka living with Yuuta had any bearing on their relationship but clearly their weird awkward romance hasn’t moved an inch, possibly even regressing since the last time we saw them.

Nevertheless, the show is back so we might as well enjoy it right? And thankfully that’s not too difficult as this cast is always a blast to hang out with. I will never, ever grow tired of Dekomori trolling Nibutani and her appearance as the student body representative was one of the most delicious burns yet. Isshiki and Kumin don’t have too much to add this week, but the little call back to Isshiki’s crew cut from last season and Kumin’s attempt to be funnier were nice additions. For all my complaining about Rikka and Yuuta’s relationship, they at least seem to have a certain stability but I suspect that is going to be challenged soon enough. It’s these undeniably lovable characters that are going to keep me invested in Chunibyo and ultimately make me give this episode a pass, but I’m really hoping introducing a rival for Rikka will shake things up enough to justify an entire new season. 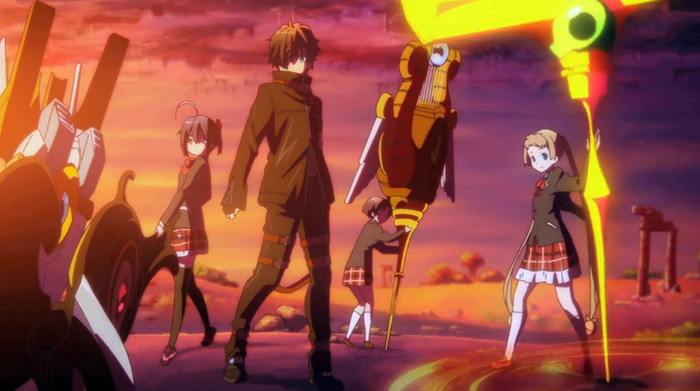 The second season of Love, Chunibyo, and Other Delusions briskly brings us back to before the show delved into some of the most crackpot drama this side of KyoAni’s Key adaptations, and thank the Wicked Eye, it’s all the more tolerable for it. While the spirit of Kanon, Clannad and all those other fish-eyed farces continues to linger on in Yuuta and Rikka’s entirely platonic “romance”, the focus is strictly back on slapstick and as a matter of fact, it’s entertaining enough, at least as a means to bring the show back. For now. Nibutani and Dekomori are still at each other’s throats, Rikka is as delusional as ever and Isshiki doesn’t get a single step closer to wooing his beloved Kumin, but the problem is that you can’t make yet another entire season about just that.

Kyoto Animation doesn’t waste any time getting viewers back into the loop, but stays marching in place once it’s gotten there, which sadly enough, does lead to the realization that these characters — despite all the bloated “catharses” they went through last season — aren’t very interesting. Sure, Nibutani is as loveably smug as ever, but Kumin is still completely irrelevant and Rikka’s complete lack of emotional maturity is starting to weigh heavily on the fact that she’s supposed to be in a relationship. Even more grating is the fact that half of the cast gets ditched or conveniently taken out of the picture just to have Yuuta and Rikka live together.

It’s hardly the swerve Kyoto Animation might think it is, however, as everything else remains roughly the same, with little ambition to actually shake things up. Half an episode into its new season, Love, Chunibyo and Other Delusions has already written itself into a rut, and I don’t trust Kyoto Animation to be able to rekindle the spark simply by adding a new girl to the crew. Call me mopey, but there is a reason why second seasons of slice-of-life anime are often lambasted. In fact, in many ways, Kyoto Animation’s shows are like their female leads: Dopey, childish, in desperate need to be reeled in before they hurt themselves, and if you’re locked in a room with one of them for more than an hour, you’ll lose your mind. Oh well, at least they stopped trying to be dramatic. For now 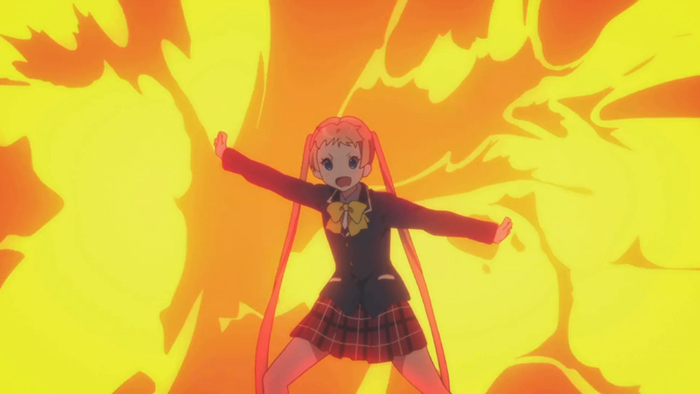 This is pretty much exactly what I figured a second season of Love, Chunibyo, and Other Delusions would consist of – namely more of exactly the same sort of thing that the first season majored on while conveniently forgetting things such as ‘plot’ or ‘character development’. So despite all the excruciatingly tortured romance/angst that dragged down the second half of that initial offering, we’re back to Yuuta and Rikka having basically no romantic chemistry, despite the fact they’re dating each other. In fact, the entire premise is sort of laughable – every single other person in their lives has buggered off so they’re living together but sleeping in separate rooms entirely innocently? Uhuh, sure.

Really, returning to Chunibyo reminded me of everything I love and hate about Kyoto Animation shows. I still can’t stand the character writing, and I’m growing increasingly intolerant of Rikka the more I see of her. A crazy, weepy, woman-child who seems incapable of doing anything without the aid of boring everyman Yuuta, she’s hardly a compelling heroine. The cast is pepped up by Dekomori, as insane as ever, and bestest best bro Isshiki is back to make sure this doesn’t quite become a one man harem show, but as a cast piece it’s very stale.

Yet, there’s still some of that trusty KyoAni magic lurking, albeit perhaps a thinner sprinkling than before. There’s an endearing quirkiness to the writing, with some sharp dialogue, and all the characters are aided immensely by the studio’s detailed animation work, which brings them to life way better than their threadbare motivation could. Production values are typically high (rubbish opening and ending aside) and there’s no denying that the goofy fantasy sequences are still immense fun. There’s definitely something here to get your slice-of-life jollies then, but it’s a pretty diminished return over a concept which had already lost much of its lustre. 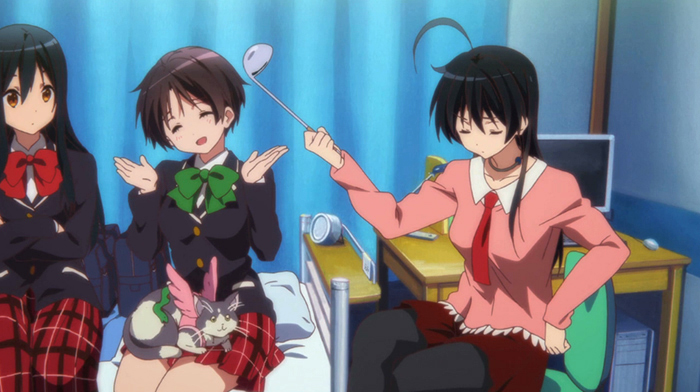 I think going into this asking for more than your average slice of life show is going about it wrong. That way leads frustration as I can’t see the whole Yuuta/Rikka situation getting any better, what with this being a KyoAni show and all. It’s such a shame that the studio seems allergic to functioning relationships, but thems be the breaks I suppose. Instead, I’m going to enjoy this show for what I did the first time: good animation, funny gags, and cute characters.

That said, I do hope the new girl brings some spice to the story. While I’m willing to accept the regular shenanigans to remain the status quo, I wouldn’t mind there being a bit more depth to the story. Considering she is also a chuunibyo, I doubt that is going to be the case. If they had to deal with their emotions normally, I could buy it, but having them duke it out in their ridiculous fantasy worlds is no good way of resolving issues. If all that comes out of this season is Kumin being Kumin, Dekomori being a troll, and Rikka being adorable, then I’ll be happy. Let’s just hope we at least get that.