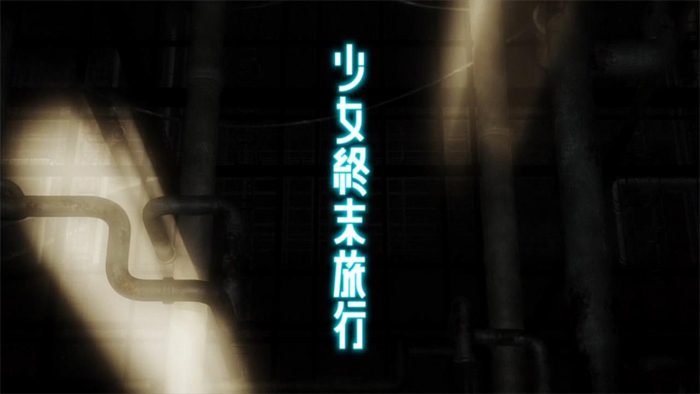 Chito and Yuuri appear to be the last people alive in an apocalyptic wasteland, roaming from one place to the next in search of food and supplies.

Euri’s verdict: The Last of Us

With an art style that at first glance looks surprisingly similar to that from Made in Abyss, it’s tough not to draw comparisons between the two shows. However, while they are both about exploring and adventure, that’s about where the similarities end. Chito and Yuuri are alone in the world, exploring not for fun or with a grand goal in mind, but to survive. Even though they’re travelling as a pair, they feel lonely. Even though they have a huge world to themselves, there is no excitement. It’s the end of the world, and it’s hard to forget that when you’re surrounded by rusting machines and weaponry.

The dynamic between these two girls is an interesting one. Chito appears to be in charge, being the authority on when they can use any of their dwindling supplies, and being quick to stop Yuuri from goofing off. That said, she also seems quite calm even in those situations, which to me feels like a side effect of having very limited contact with other people. It’s hard to say how true that is at this stage as we don’t know anything about her past and what the state of the world was like when she was younger, but it certainly seems like this lifestyle is taking a toll on her. 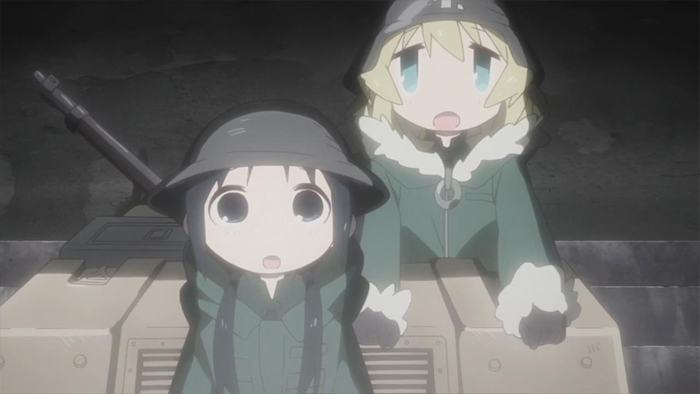 Yuuri is the more playful of the two, but it’s quite toned down compared to what you might expect. She’s easily distracted and a little ditzy, but there seems to be more to her than she’s letting on. She’s clearly very aware of their situation, but even though there appear to be no other humans, she insists on carrying a weapon. She also listens to what Chito tells her, as it directly causes the incident while eating rations, but whether this was Yuuri’s way of being playful, proving a point or both remains to be seen.

I’m fascinated by where this show is heading. This episode by itself is fine, and I’m sure people might be put off by the slow pace, but ultimately it’s all world building for the rest of the series. I’m a little concerned that Girls’ Last Tour might end up being a boring slog, but this first episode has done enough to make me want to find out either way.

Jel’s verdict: Made In Apocalypse

In adding to the Made In Abyss comparisons, I found this much more disturbing because it’s grounded in reality. These girls are victims of a man made apocalypse, and there is no magic to protect them from the harsh reality they’re faced with. The moment I realized they were sleeping with a rifle between them, I knew this show would have something to say.

That’s fine with me as we could certainly use some anti-war sentiment these days, and I love the idea of delivering it in a slower paced, thoughtful perspective. I kind of hope it keeps the lighter tone between the girls and I think it will, but bits like Chito’s dream or Yuuri playfully holding her at gunpoint hint that the show might throw a few punches before it’s over. I’m certainly interested to find out where it goes. 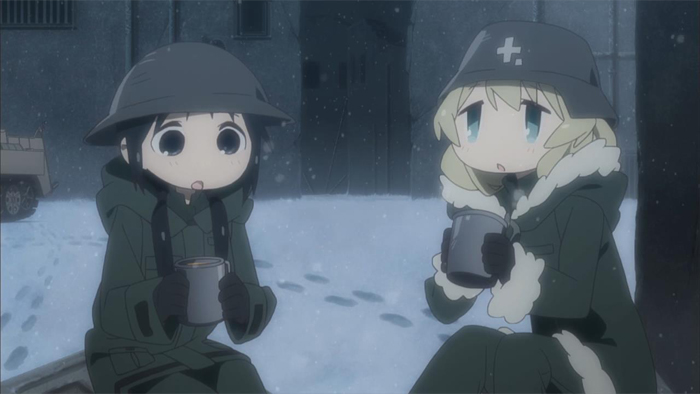 So I guess this is officially A Thing now, creating shows like this one and Made in Abyss where you take a couple of sweet, cheerful child characters and drop them in the middle of a terrible setting for juxtaposition. And you know what, that unsettling disconnect between bright, upbeat kids and dark, perilous surroundings is actually something I feel I can get behind – though it’s probably worth a note that it really only ‘works’ because that disconnect is considered perfectly normal for the world it’s in, and therefore goes largely unspoken by any of the characters. The fact that there are two small girls wandering around alone in the middle of (nuclear?) winter, with guns and broken planes littering the countryside, isn’t presented as a big deal here because as far as the characters are concerned, it really isn’t. Other things help add to the mood without any need for clumsy exposition or even a whole lot of dialogue, such as the weapons seen by the girls as vaguely mysterious relics of the past, abandoned debris of a war fought long ago by people and for a reason they aren’t actually aware of, or being able to read the word ‘chocolate’ but not actually knowing what that means. I’m not sure I’m quite used to these extreme chibi-esque character designs yet, and I sure do hope that we manage to avoid any kind of creepiness in the nudity/sexual department for a change, but based on the premiere alone, I’d say it’s looking pretty good so far.