Hinamatsuri is a slice of life dad anime except the dad is a Yakuza hit man and his daughter has god like telekinetic powers.

In our preview of this show I mentioned this looked like a “magical girlfriend” comedy, but it appears we are going next level here and getting what might be the world’s first “magical daughter” comedy. Rather than having awkward, sexually charged encounters with two teenagers thrust into a weird living situation, Nitta is concerned about Hina eating properly and whether or not she’ll fit in at school. I mean, Dad Anime like Sweetness and Lightning are kind of a thing these days so sure, why not? I’m on board for more of that. 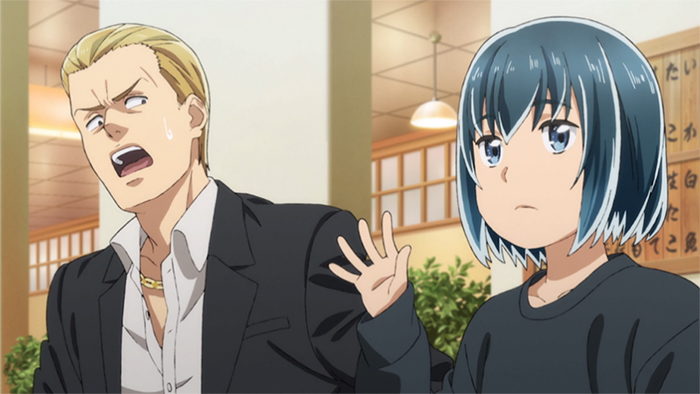 If we stopped there, Hinamatsuri would just be another chill slice of life show. But then we have to factor in the Yakuza element and HIna’s powers. Nitta seems like a pretty decent dude but he is involved enough in organized crime to the point where he’s actually asked to kill someone. Somehow they spin this into a heartfelt bonding moment between Nitta and Hina and before we know it, a scene in which she comically murders a building full of people becomes sweet and endearing. I must admit, I did not expect them to go there and I’m glad they did. Adding a dangerous, morally ambiguous touch to what is otherwise a cute show makes things considerably more interesting.

As dark as that all may sound, I would still very much classify this as a laid back, slice of life comedy. The overall tone is pretty subdued. We bounce around from moment to moment with gaps of time passing, much like any other slice of life show. It’s just in this show, rather than bonding over cooking or some other normal activity, this father and daughter are brought closer together by doing Yakuza work. It will be interesting to see if they continue to pursue a life of crime and if there are any consequences. I mean, I don’t think the show is saying murder is cool so there has to be some repercussions for that, right? Regardless of where they go from here, I am very intrigued by this first episode and am looking forward to watching more.

I’m on board with this show’s bizarre style. It’s such a jarring break from all the shows who, up to this point, play having superpowers or going to high school or being in the Yakuza as isolated events. Hinamatsuri is here to let you know you can have fun with a cliche, so long as you know how to subvert it well. It also seems to be following in the lineage of Kotoura-san of shows about psychics that manage to be funny while also giving serious consideration to the dire backstory that comes with being one. My one critique would be they felt no reason to explain their jokes until the Terminator one, which seemed completely unnecessary.