Aya Asagiri’s life is a living hell, much like watching this show. Things get better for Aya when a mysterious site offers her magical powers in the form of a toy gun. For us, things just get worse.

One of my greatest vices is a love for terrible, horrible, no good manga. As this site’s very own Random Manga Theatre can attest, the wealths of deplorable shlock to be found in the archives of your favourite manga reader site are truly beyond your wildest dreams. Despite how bad the genre usually is at conventional humour, it’s an absolute riot to see its D-list creators constantly trying to out-edge one another with sex and bloodshed so generally misanthropic it comes close to affirming your love for mankind all over again. Currently on top, at least in my view, is this ridiculous scorcher of a scene from Tomogui Kyoushitsu, in which the villain of the week reveals how evil he is by putting a live cat in a microwave oven just for shits and giggles. Such twisted creativity deserves to be rewarded, methinks, though the only reward the authors in this case are due, is laughter.

Unfortunately, there is no line thinner than the one between “so bad, it’s good” and merely bad. The opening minutes of Magical Girl Site are so vile, so odious, so drenched in only the most vicious disdain for its characters, they’re impossible to grant even the iota of credit most of its peers do deserve. There is no warped hilarity to be found here, just a cavalcade of degrading, nauseating brutality at the expense of its poor protagonist Asagiri. Magical Girl Site‘s dedication to its physical and psychological violence is unrelenting and uncompromising, yet ultimately contributes nothing to its narrative but the absolute and unconditional dehumanization of its characters. Asagiri exists merely to be a victim and a punching bag for the incessant, bloated horrors it tries to shove down our throats. Even her big moment of empowerment is completely taken out of her hands and turned into yet another trauma. Her tormentors’ wickedness is smeared so thickly their faces are set to psychopathic smirks around the clock, while her brother is such a hateful caricature I’m surprised he’s even draw in the same art style as the rest of the cast.

With the shallowness of its characters and the accelerated rate at which it tends to shoot itself in the foot with yet another brutal assault, animal murder or attempted rape, Magical Girl Site ultimately proves itself a prime example of how not to do a genre deconstruction. The conventional aspects of the genre aren’t being cleverly turned on their heads, but merely exaggerated — from the listless main character to the monsters she fights. Magical Girl Site isn’t interested in being, damning or subverting the trope it named itself after, maintaining only the most superficial of ties just to ride on the coattails of a popular genre that embodies every value this show seems to abhor. A hollow husk lacking in empathy, tact, creativity and point, it’s little more than a desperate, pathetic cry for attention. As a bit of an expert in those, let me ask you not to grant it what it’s pleading for.

Zigg’s verdict: Do Not Watch This Show

I’ve never before had to stop watching a show partway through because I was simply too disgusted to continue, so I guess Magical Girl Site is breaking new ground on that front at least? Let’s be clear – I have no problem with extreme content when it’s used for the purposes of furthering the story, but that’s absolutely not what’s happening here. Instead, this is misery pornography of the highest order, a gross, leering look at a series of increasingly disturbing and vile abuses. I guess there’s an audience that gets off on this shit? Let’s ignore them and just say this was the worst thing I’ve ever seen while writing here, and it’s not even close. Despicable. 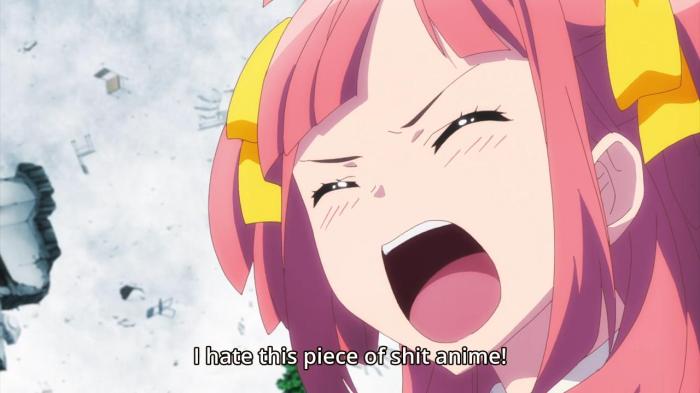 Once in a while, an anime comes along that just tries so hard to be edgy and grimdark, so relentlessly over the top in its story and tone, that I can’t help but laugh at its sheer ridiculousness. That’s Magical Girl Site in a nutshell, and I have nothing at all positive to say about it (other than that the fact that it provided me with enough entertainment to literally make me cry with laughter by the 5-minute mark – after that, my response was mainly disgust). The show doesn’t even make up for any of this in its technical aspects either – in fact, some of the animation looks shoddy and low budget enough to have been fan-made, which I admit also made me laugh even though that clearly wasn’t the intent. This is by far the worst series I’ve seen in a long time, and comparing it to the likes of Madoka Magica or even its inferior successors like Day Break Illusion would be an enormous insult. If you value your integrity (or even just your sanity), for the love of god do not watch this.