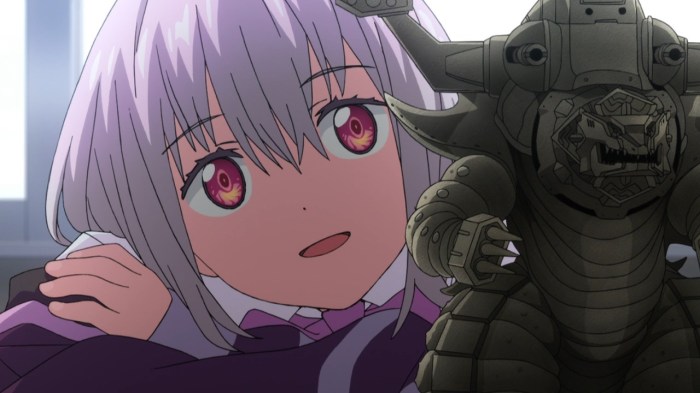 Akane reveals to the Gridman Alliance that she’s been behind all the kaiju attacks, and warns them she’s going to destroy the upcoming school festival

Gridman continues to rattle along at quite a pace – it was only an episode ago that Sho and Rikka were sceptical of Yuta’s claims about Akane, and now the lady herself makes sure there’s no doubt possible. On the one hand, I’m glad that they’re not bulking out the show with unnecessary filler, but it does feel like there was more mileage to be had out of Sho and Rikka each having their own reasons to doubt Akane’s villainy. Initially I was a bit disappointed that they seemed to discard that possibility, but fortunately Gridman found a way to weave it into the ongoing story in a smart way which keeps the pace up but doesn’t lose the potential. 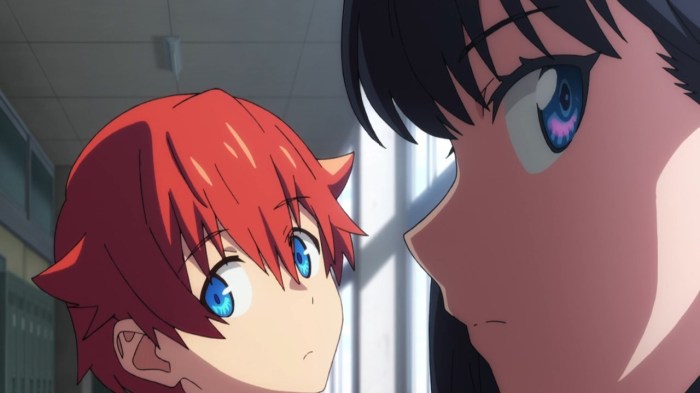 Thus, we’ve got another episode where Rikka is our primary focus. This isn’t really so much a complaint as it is an observation, but it continues to be interesting how much of the emotional and narrative heft of the show is tied up in her rather than our nominal lead character Yuta. It’s mostly because of all the cast she’s the one closest to Akane (at least in theory) and a lot of Gridman has been as much Akane’s story as anyone else’s. The writing has been good about emphasising Rikka’s desire to get closer to Akane and strengthen their friendship, and this is taken to its logical conclusion here as Rikka, even confronted with the truth straight from Akane herself, seeks a reasonable, non-violent solution to the problem.

It’s good, strong characterisation, well in line with what we’ve seen of Rikka in the past – she’s always been more grounded compared to the boys, who immediately start thinking about how thy can win in a straight fight. I don’t think the conflict between Sho and Rika works quite as well as it could, since Sho is so much less fleshed out than Rikka, but it provides a solid conflict for the episode that wraps up neatly at the end with a bit of development for them both. There’s dramatic irony too, since we the audience know way more about Akane’s true nature than the characters in the show do, and we know there’s no way that she could ever be talked down in her current state.

This leads to the dramatic centre of the episode, which is Rikka and Akane’s conversation on the bus, itself a deliberate callback to their awkward interaction in episode 4. Along with her opening scene in the classroom, it’s another good insight into how completely divorced from reality Akane is. It’s all a game to her, one that she’s gleefully playing along with purely out of curiosity. She seems incapable of feeling any guilt about her actions because to her they barely even have consequences. It’s a good contrast with Rikka, who admits that even though she wasn’t that close with Tonkawa or the other classmates who died, she still cares that they’re no longer about.

Then of course there’s the bombshell revelation that Akane apparently ‘programmed’ Rikka to be unable to dislike her, a twist which raises almost as many questions as it answers. It’s a clever reason as to why both Rikka and Sho seem unable to completely condemn Akane, and explains her position as a much-loved class idol despite being the quiet sort. The thing is though, if Akane created this world and everyone in it, why is there anything present that annoys her enough that it needs to be removed? The show has been deliberately ambiguous on whether Akane really is a ‘god’ as has been claimed, or whether it’s just her relationship with Alexis which grants her power. Speaking of which, Alexis seems largely back to being a loyal servant this episode, but his closing lines hint he’s still manipulating Akane from behind the scenes.

On top of all that, we’ve got the first appearance of Full Powered Gridman, a mode anybody could have seen coming miles off, but is still cool to behold. Having Gridman shift his size to accommodate all of his powerups at once is a fun, novel solution to the problem, and one that was cleverly hinted at a few episodes ago when Gridman mentioned that changing his size affects the amount of power used. I’m actually pretty disappointed that we didn’t get more fight this week, considering how amazingly cool Akane’s kaiju is and how excellent the brief snippet we do get is. I suppose it makes sense that our sweet new powerup would rapidly kick the crap out of anything in front of it though.

To be brief, it’s another excellent episode for Gridman, one which easily maintains the great balance between action and character the show has made its trademark. With this, the story is nicely set up for a climactic back third, one which could potentially propel it into classic status. I think a lot of that will depend on how satisfying the answers to some of the ongoing mysteries are. If they’re good, then Gridman has a chance of being an all-timer. I’m excited to find out.

One thought on “SSSS.GRIDMAN Episode 8”