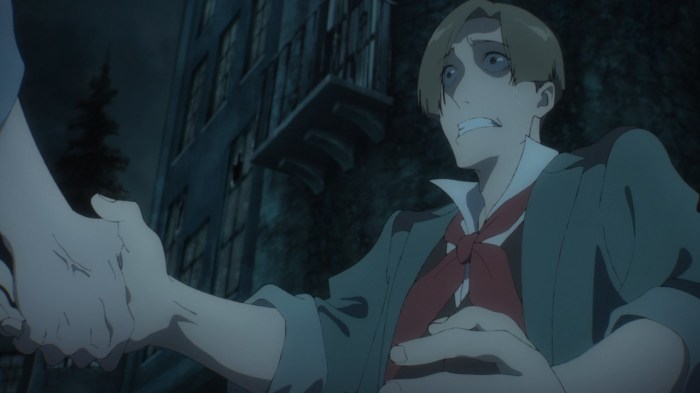 With monsters rampaging in the streets, every faction scrambles both to stay alive and to find the truth.

After a few episodes of being depressingly conventional – and dare I say, dipping into outright boring – Magatsu Wahrheit has picked up again at least a little. i wouldn’t say I’ve regained hope in how the show is going to end or anything, but I’m a bit more optimistic than last week, and that’s broadly a good thing. At least it’s not getting worse!

Episode 7 is all about Innumael and Irma getting chased down by the cops, and frankly it is a downright dull episode. It’s not actively offensive or anything, but barely anything about the broad plot moves forward other than the fact that Coldfire has been found in the capital, which puts the government’s motives in a darker light than they’ve already been. The higher ups obviously don’t care about the populace – even the upper class – and we get the requisite couple of scenes of Mary Bult and the Emperor conniving about the New Capital plan or somesuch. I do get the distinct feeling that I’m supposed to know and/or care about the Emperor and his wife from the game, but again, I have not and do not plan on playing it.

We also get a team-up situation where Innumael and Conrad get dropped into the catacombs and now must help each other escape, and about the best thing I can say about the entire sequence is that it pays off Conrad’s characterization of being kind of a shitty, casual grunt. Leocadio would have absolutely not teamed up with Innumael in this situation (though we’ll get to episode 8 in a moment), and even though it’s only for about one episode, I can appreciate the work put into making this a fairly plausible sequence.

What I absolutely do NOT appreciate is the amount of time spent on Captain Helman’s backstory and motivations. We already know he’s a psychopath who gets off on the power and authority that comes with being an executive in law enforcement. Frankly, that’s all we ever needed; he’s just not important enough of a character. And yet, the show insists on spending an absurd amount of footage on him espousing his (obviously unhinged) motives and exploring his dramatic backstory, and not a second of it is worth the time. None of it adds any broader context to the world’s conflicts or those of the other characters. And it won’t, because we kill off the guy! What was even the point?

At any rate, Leocadio finally steps up to protagonist territory and kills Helman, and basically gets peer pressured into realizing that actually the military and the government are bad. I’d like to highlight how he kind of had an unrealistically rosy view of them in the first place, all things considered. Leocadio was apparently living in some kind of an orphanage and explicitly took the job to help provide for his family (who have completely vanished from the show, by the way); he’s pretty low on the societal totem pole. Yet the revelation that the 1% are evil jerks seems to somehow be shocking news to this dingus. 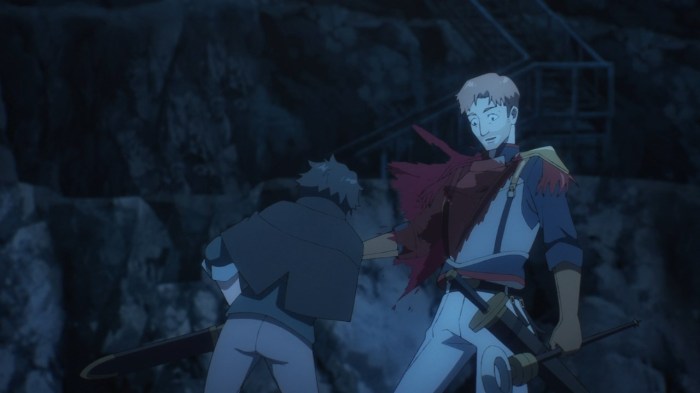 With all of that resolved, the newly monsterified-and-yet-somehow-lucid-after-being-shot-and-blown-up Elfriede tells everyone to seek out the next plot coupon: Important Guy of the Proper Noun Squad, a member of the heretofore unmentioned Holy Knights. I have no idea who they’re meant to be or why they’re important, but Innumael and Leocadio are finally in the same location and it looks like we’re gearing up for a final arc. I’m ready to be disappointed!