This time: One Punch Man, a webcomic adaptation with art by Murata Yusuke and scenario by One

It’s too bad that this manga can be summed up pretty quickly, since I actually really enjoyed this one and I’d like to talk about it, but there’s just not a lot to say. Even so, here we go!

One Punch Man is just what it sounds like: it’s about a superhero who can defeat any opponent in a single punch. The embodiment of the planet’s will, seeking to destroy the virus that is humanity? Beaten in one punch. A giant beast of a man, powered up through science to become the most powerful person in the world? Beaten in one punch. The evil army of underground mole people, seeking revenge on the surface? You guessed it; one punch. The thing is, since our hero Saitama is this unstoppable badass who can literally defeat anything in a single blow, he’s lost all meaning in life. Where’s the fun in being a superhero if it’s not hard at all? There’s no challenge, no adrenaline rush, no meaning to any of it. He still saves the planet from these threats since he’s a nice guy, but what else does a part-time superhero do with himself?

The series is primarily focused on comedy, but there are a few subplots going on in the background. Early on we’re introduced to the cyborg Genos, a badass hero in his own right, who begins to follow Saitama around, trying to figure out the secret of his invincible power and searching for the evil cyborg who killed his family. In a later plot arc, Saitama and Genos go through exams to become official certified Superheroes; it turns out, even if you save the world a dozen times over, if you aren’t registered then you’re just another caped weirdo. In the end, though, everything that happens is in service to the comedy, since all the evil machinations going on behind the scenes aren’t going to matter if the hero wins in one punch. 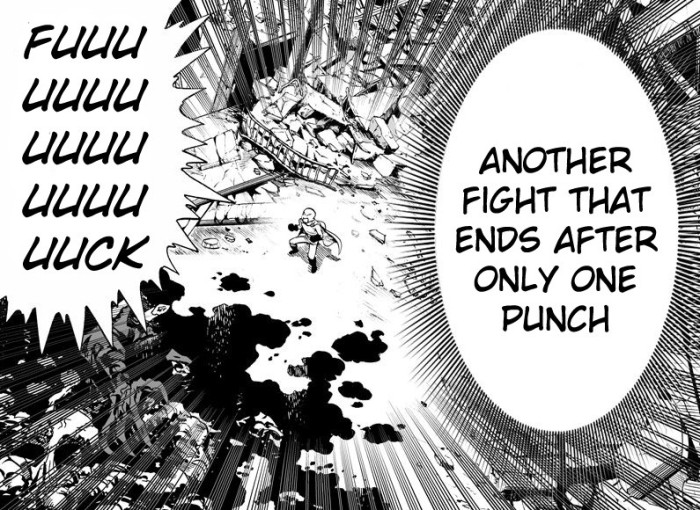 Verdict: Amazing
This is a very fun series. My understanding is that One Punch Man was originally a webcomic, but it’s now being redrawn by the artist of Eyeshield 21 for a more conventional release, and wonderfully so. The art is very nice looking, with that distinctive shonen battle style which makes fights dynamic and enjoyable. Some sequences are practically like flipbooks, with multiple pages each showing only minute changes to the situation, adding up to big splash pages. Only around 20 or so chapters have been scanlated so far (and I’m not sure how many the series will have in total), but if this sounds at all like something you’d enjoy, then it’s definitely worth your time to check this out.