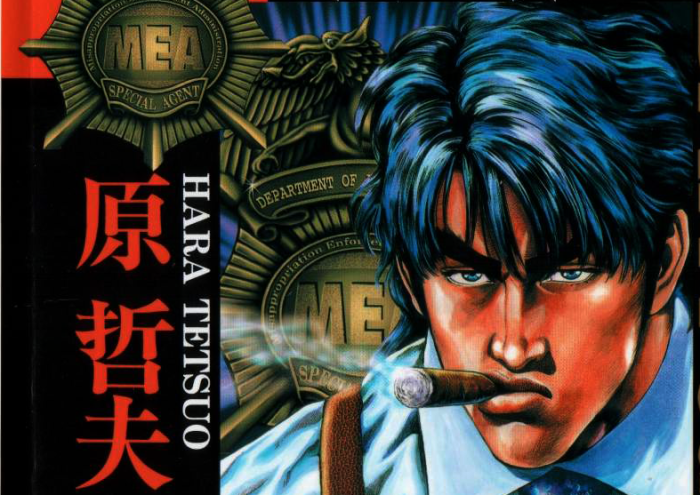 In modern-day Japan, corruption has run rampant. Government officials and Yakuza dons alike are practically swimming in illicit, misappropriated funds, handed out by dirty bankers. Japan’s economy has become so bad that it’s starting to negatively affect Wall Street, leading the United States to strong-arm the Japanese Prime Minister into forming a task force to investigate the dark world of dirty money. Thus, the MEA, or Misappropriation Enforcement Administration, is born, with the power to act above the law to retrieve the trillions of yen that have been lining the pockets of the corrupt.

Enter the eponymous Rintaro Nakabo, super beefy guy and loose-cannon-cop-on-the-edge. Posing as a simple, mild-mannered banker, his job is to infiltrate Tozai Bank, one of the biggest and corrupt-est banks in Japan, and commence with the misappropriation enforcement through any means necessary. What this usually entails is showing up at some dirty politician’s doorstep to ask for the money to be paid back, being accosted by their thugs, and then busting out the biceps and cigars to intimidate them into spilling the beans. Assisting with Rintaro’s mission is Seiichi Nijino, a former “corporate slave” who faked his death upon realizing that his bank cared more about the cash than about their employees. Armed with a photographic memory, he is Rintaro’s guide to who and where Tozai Bank’s money has ended up. Together, they investigate embezzlement! Wait, that totally is fighting crime.

TOGETHER, THEY FIGHT CRIME!

Verdict: Fist of the Cash Star

While perhaps a regular story centering entirely around debt collection and investigating embezzlement would be incredibly boring, Misappropriation Investigator Rintaro Nakabo manages to be at least entertaining, in no small part due to Tetsuo Hara’s famous artwork. The entire manga oozes masculinity to a hilariously overdone degree, turning fairly mundane meetings into hammy confrontations that might not be out of place in an action movie. Alas, it seems that the adventures of Rintaro Nakabo only lasted two volumes, and over ten years ago at that; one could perhaps say that he’s already dead.