A lot of things happen! Most of them are very ugly! None of them make sense!

This episode is arguably just as bad as last weeks, but with one key difference – whereas that episode was content to largely follow one main ‘plot’ with a subplot, this one throws story elements at us like they’re going out of fashion. The net result is somehow even more incoherent than what we’ve seen before, so to keep both my writing and my sanity straight I’m going to try and break it down into individual subplots.

So I guess the weird random dude we saw Calibur talking to last week (and who I assumed was a human Desast) was actually one of the flunkies who’s been sitting around in that one room since episode 1. Can you really blame me for not recognising him? Anyway, Storius, as he’s apparently called, shows up and suddenly reveals that he’s got the ability to seal Riders’ powers away with a magic book. Firstly, this raises the obvious question of why the Sword of Logos still even exists if one baddie can neutralise them so effortlessly. Secondly, so easily does this happen that it makes Touma look like an absolute rube, which to be fair is entirely consistent with his ongoing characterisation. Anyway, this leads logically into…

#2 – Touma and Daishinji try to reach Avalon because that will restore his powers (?)

No of course we don’t get a good reason why. Storious just tells Touma that he needs to go to ‘a lost place’ and Daishinji immediately deduces that means Avalon. Now, I don’t really have an issue with Storious giving the heroes a hint, since it’s obvious he has some sort of larger agenda at play, but it’s incredibly bizarre that we’re invoking ‘Avalon’ this early. It’s previously been established that getting there is Calibur’s ultimate aim, so shouldn’t this really be something that we build up to at least a little bit?

Anyway, Touma does some research in the Logos Library, but can’t find anything, until he makes Daishinji give up the location of a FORBIDDEN book. We’re not told the title of this book, anything about its contents or the reason why it is FORBIDDEN. It is, surprise surprise, an incredibly lazy deus ex machina to get us from A to B in the easiest, shittiest way possible. He then proceeds to do some Usbourne Puzzle Adventure bullshit which achieves….nothing? The way the sequence is shot implies Touma has some sort of eureka moment, but what he deduced isn’t shown onscreen, and instead we have a bizarre non-sequiteur scene with Daishinji and Touma having A Moment™ together as if they’ve just faced down mortal peril. You might think this sequence of events makes no sense in text form so imagine how insane it is to watch.

#3 – Calibur is also going to Avalon

Speaking of Calibur, he’s also off to Avalon. How has he achieved his long held aim, the aim which he presumably betrayed the Sword of Logos 15 years ago to achieve? He just asked Storious to take him there apparently. How does Storious intend to get him there? He’s just got another FORBIDDEN book that he keeps chained up that will take them there. OK, technically it’ll ‘open the door to the rift of time’ but that sounds a lot like Avalon to me. Apparently his only motivation is he wants to see what will happen, like some sort of shit Metron or something.

Here’s a great example of how little Saber cares about even basic storytelling techniques like continuity between scenes. At the end of last episode Desast had ambushed Rintaro and Mei, then had himself been ambushed by Zooous. When we catch up with them this episode, Desast is nowhere to be seen and Rintaro and Mei are actually ambushing Zooous themselves, rather than vice versa! Also, they’re in a totally different location and Rintaro and Mei are in entirely different outfits. How is it even possible not to get basic shit like this right? Clearly there was meant to be at least one scene between these two events but without that we just get the impression the plot is a series of random unconnected events.

Once Rintaro transforms and fights Zooous, because…that’s what Riders do I guess, a conversation ensues which reveals that a) There was a previous Blades b) Zooous killed him 15 years ago c) That guy was Rintaro’s mentor and d) now Rintaro wants REVENGE. This is clearly meant to make us more invested in the Zooous/Blades rivalry, except that that rivalry didn’t even exist until this precise moment, so the sudden seriousness with which we’re meant to take it is laughable rather than dramatic. Rintaro instantly transforms into bootleg Christian Bale Batman, all grim and snarling and the entire thing is just deeply, deeply bathetic. 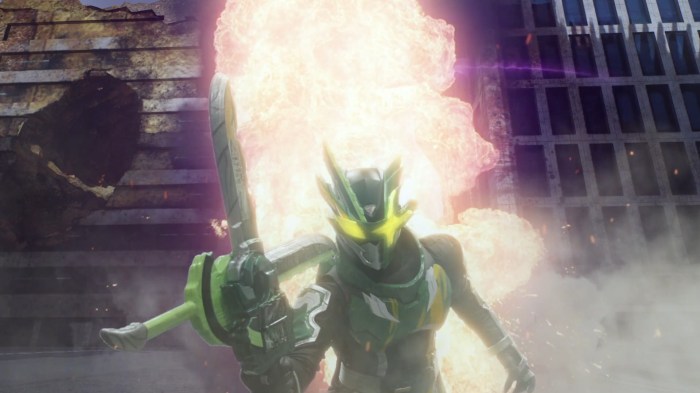 #5 – Genji from Overwatch is now here

The fact that the debut of a brand new Rider is probably the least interesting and important thing in this episode is partially down to years of series diluting the importance of new Riders by featuring an overabundance of them, and partially down to Saber‘s own unique awfulness. It certainly doesn’t help that Kenzan aka Ren Akamichi, is just absolutely insufferable from the moment he pops onto screen. Touting the mentality of a five year old and with a goofy stoner smile permanently plastered across his smug face, I hated this guy every second he was on screen. His fight against Desast also marks a most unwelcome return of the battle set entirely in a greenscreen CGI hellscape.

There’s just so much that’s bad here. What about the absolute non-mystery about the identity of ‘Slash’ which goes nowhere and is entirely pointless? The show also looks even worse than usual this week – aside from the aforementioned battle in CG hell some of the camerawork is so shaky and demented it feels like the grips were shooting the Normandy beach landings instead of a children’s entertainment program. The overabundance of powerups and their garish, effects laden attacks still suck any joy out of the fights whatsoever, every character is a cardboard cutout and the plot is simultaneously shallow as a puddle and so insanely up its own ass it’s incomprehensible. This show is garbage and I hate it with a deep, murderous intent.

See you next week! 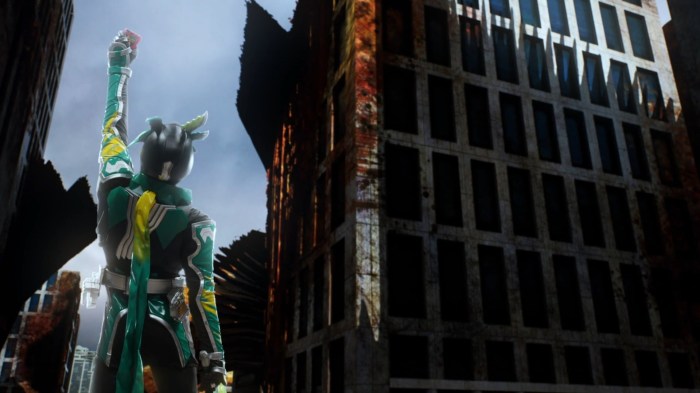