“The King’s Blade, Lies Within Avalon”

Touma and Kento drop acid and finally make their way to the legendary Desert of Avalon!…er, Soundstage of Avalon…Concrete Bunker of Avalon?

This episode is a marked improvement over the past two, which is to say that it’s merely desperately bad, rather than absolutely unintelligible. Think of it as the difference between screaming in pain and speaking in tongues. At least it’s nice to be able to explain what’s awful about it cogently rather than spending half my time trying to articulate what exactly happened.

After the horrible mélange of last week, at least here the writers have to good sense to stick to just two major plotlines, namely Touma and Kento’s trip to Avalon, and Rintaro and company’s battle with the monster of the week. The first is much more meaningful, so we’ll tackle that to begin with. 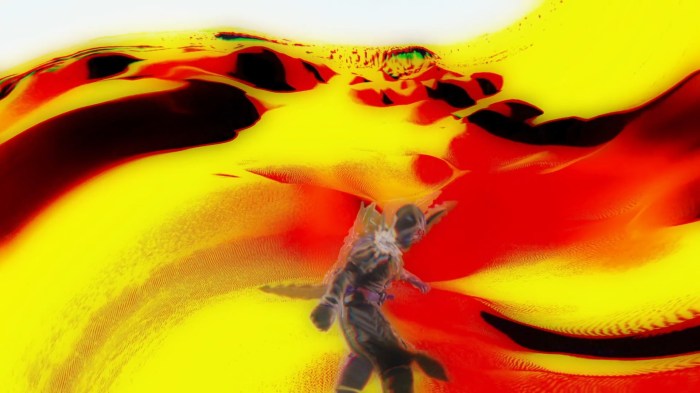 Firstly we get the hilariously simple and lacklustre solution to the ‘riddle’, which seemingly reveals nobody in the Sword of Logos has ever heard of the concept of ‘cross-referencing’ before. That’s nothing compared to the journey itself though, which hilariously plunges the pair into possibly the cheapest looking bit of tokusatsu green-screening ever, and that’s really saying something. I can’t work out what’s my favourite part – the atrocious filters that make it look like a late 60’s Pink Floyd video, the powerful ‘Windows XP desktop’ energy of the backgrounds, or Calibur just hanging out in the back looking like he’s been caught unaware doing The Locomotion.

Alas, all good things must end and soon we arrive at Avalon…or is it the rift before Avalon? The show is not entirely clear, although fortunately it doesn’t matter since it’s just the same sand dunes which show up in ever Rider/Sentai show. Oh and Calibur is here, and he reveals that he’s journeyed to the land of late-night softcore anime and gained the power to hide his face behind massive light streaks. Jokes aside, this is another clear indication that he’s not actually Kento’s father and while I appreciate the show actually having a twist in mind, it’s a shame it needs to be telegraphed so hard. 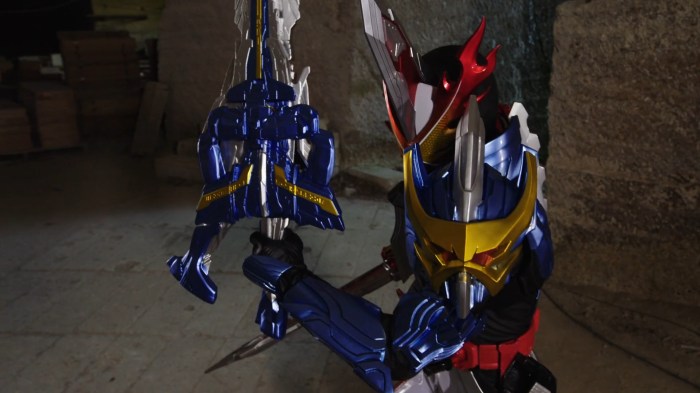 In any case, Touma escapes via magical plot bullshit (apparently Calibur can be defeated via the dastardly tactic of grabbing his armpits) and arrives at the REAL Avalon which is…a white soundstage. Look, I know it’s kind of hard to rustle up some medieval Arthurian imagery in the middle of Japan but come on guys, you didn’t even try. From there Touma receives yet more vague exposition from a mysterious all-knowing figure, a narrative technique so tired and cliched it was already dead and buried even before this show began egregiously relying on it. The new, ostensibly King Arthur themed powerup is extremely lame, and really doesn’t look a great deal different from the other lesser powerups, giant toy sword aside.

Since this is Saber though there’s only one thing that can prove how new and awesome it is – a bad battle against a giant CGI enemy! Honestly, the show’s addiction to horrible CG effects over the much loved, also-horrible-but-in-a-totally-different-sort-of-way practical suits and stunts remains one of its most baffling aspects. This ‘fight’ is incredibly short and unsatisfying but must have cost infinitely more than getting some stunt guys to do their thing. I guess kids like the bright lights. In any case, this is a great example of a powerup feeling entirely unearned, since Touma did nothing aside from ‘solve’ a ridiculous puzzle. He didn’t overcome any obstacles or grow as a character in any way. His powers being taken away was a minor inconvenience at best, which is one of the notable downsides of having so many damn Riders around. Mysterious figure does mention that he’s going to have to go through a trial, but by introducing the powerup before the trial you’re basically ensuring the outcome can’t be anything but an anticlimax.

Over in the other plot, at least the show tries to make Rintaro work for his powerup…in theory. The problem is, again, that the thing with Zooous and his master was introduced out of nowhere last episode. We’ve barely had any time at all to process it ourselves, let alone to see Rintaro deal with it, yet the show just leaps straight to the payoff here, negating any chance of meaningful change or development for the character. We’re given some throwaway lines about how the Liberation ‘places enormous strain on the body’ and how he could even be risking his life, but all that translates to is another soundstage and Takaya Yamaguchi hilariously throwing himself about. There’s no real breakthrough moment or revelation, he just shows up to the battle fully formed and ready to go.

About that battle – it’s an odd one. Pretty much our entire roster of villains is present, minus Calibur. Even Desast shows up, out of nowhere and with no explanation as to how he survived last episode except for a throwaway line about how he’s hard to kill. In theory, Storius taking Mei hostage and then Zooous deciding to just kill her is a great concept and the perfect way for Rintaro to make a dramatic entrance, except….for some reason the show decides to play this for goofy comedy, complete with Wile E. Coyote cartoon Zooous (what did I just say about this show loving crappy CG?), bad greenscreen of Mei flying through the air, and a completely out of left field romance angle. It just totally sucks any sort of tension out, and consequently also any sort of relief or triumph at the rescue. Blades beats up Zooous, who then just exists stage left I guess, it’s very unclear. Presumably everyone else also leaves, despite still outnumbering the Riders almost 2:1, since afterwards Blades mops up the monster of the week and everything is hunky dory. Just baffling all around.

Still according to the teaser, Ogami dies next week! Finally, something to look forward to.