With the park now short on staff, Kanye holds open interviews with laughably low standards. The proceedings are made slightly more interesting when Macaron slips a “Heartseed Fruit” – a magic item that makes people honest – into Fifty’s curry.

I’m starting to come to terms with the fact that Amagi Brilliant Park is on course to being another KyoAni show with good parts that never quite fit together. I’m still enjoying the humor and the general weird factor that stems from the crazy premise. It’s hard to go wrong with foul mouthed mascot characters and I’m not ashamed to admit silly slapstick like Fifty banging her head on her desk is enough to get a chuckle out of me.

Beyond that though I’m having trouble getting into everything else. I like Kanye and Fifty’s characters on their own merits, but as far as romance goes they have zero chemistry. Even after carting out some Truth Syrum a.k.a. one of the oldest, laziest tricks in the romantic comedy book there STILL was no spark between them. I’m also worried about bloating the cast with another group of cute girls, especially after Fifty’s dream. I swear if this turns into Kanye Harem Time I’m out, I don’t care how many episodes are left to go. On a related note, was anyone else disappointed they found away out of the one girl working as an “AV” star? Not only did it result in a horribly lame joke, you could see it coming a mile away. Gotta keep those potential waifus pure, right?

What has me the most worried though is the fact that we’ve pretty much ignored the main goal of getting more visitors for several episodes now, and as Marlin pointed out to me they’ve somehow skipped a month and ballooned to an impressive 8,000+ visitors a day without showing us how. Wasn’t that supposed to be the ENTIRE PURPOSE OF THE SHOW??? I would have been much more interested in seeing what tricks Kanye came up with to make that happen than fumbling around with a hollow romance. My opinion of Amagi has been pretty up and down overall, but its definitely trending down now. I hope there’s some kind of interesting plot development hiding in that box in the final scene of the episode. 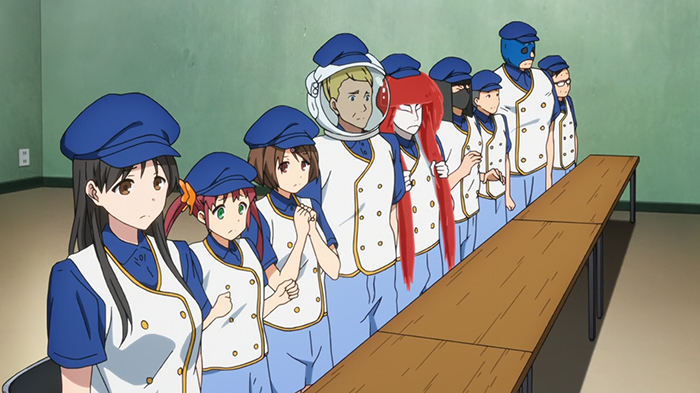 When I was talking to other members of The Glorio Blog who aren’t watching this show, I described its pace as spinning its wheels. Well, it would appear the wheels have been spinning for a whole month while we weren’t looking, as we don’t find out this is a flash forward until the very end. I can’t understate how disappoint it is to see this show go about its very plot hook so flippantly. Last episode, the park was still averaging about 250 visitors. Now we see that during that month, somehow those numbers were multiplied by thirty. What happened to make that change? Why aren’t we see that change in progress? Wasn’t that the whole point of the show? Instead we get something much worse, very bland romcom antics. It does explain the premise of the episode, that yes getting that many more visitors means they’ll need a bigger staff to handle them, but in the beginning they seemed to be making it sound like the park was in as dire straits as it was the episode prior. I would think having over 8000 visitors would end their cashflow problems, so I’m not sure why that wasn’t brought up in the beginning.

On the topic of Kanye and Sento, things have only gotten worse. The poor attempt at romance was woefully ineffective. As Jel said, nothing is lazier than a truth serum. Maybe we would have a bit more incentive to care about these characters and their love lives if, idno maybe we got to see the full month they were bonding since this episode? I can’t tell if the light novel really made such an egregious gap in character development or if this is some problem on KyoAni’s end in adapting it. Either way, it creates a scenario where we’re supposed to believe in a romance between two characters who have absolutely no chemistry so far. 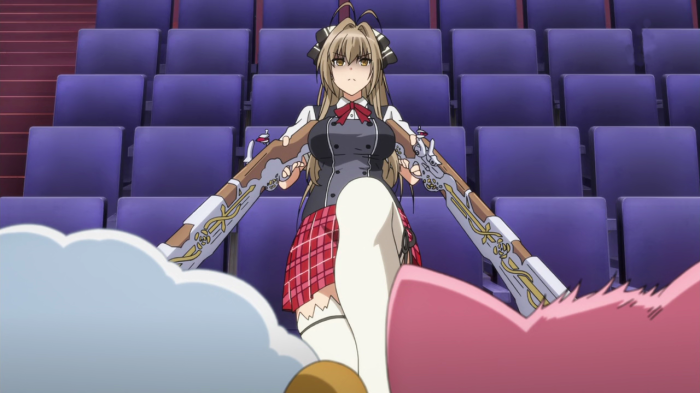 I guess I haven’t even addressed the main plot of this episode, namely Sento’s dream and the collection of weirdos the hiring blitz brought in. The biggest problem with bloating what is already a pretty gigantic cast is, like Jel, I can only see this distracting the show from its main plot further than it already has. I feel it would be awful strange for this show to have Sento’s dream and then have nothing come of it, and yet that is the exact thing I’m hoping for. The new girls have barely any personality to start out with. The only thing they seemed to be good for were one-off gags. Even then, they didn’t nearly entertain as much as washed up politician and random American astronaut. Good gags have short punchlines. With all of these girls, the show dragged out each of them. “Oh, isn’t it crazy that she’s a porn star?” “Oh man why did you get stabbed?” If they left it at that for each on I feel like it would have been a lot funnier. Brevity is the soul of wit, after all. If the show doesn’t do anything to either go back to our original plot or actually give us some character interaction to warrant the recent romance arc, it’ll be hard for me to keep with it for much longer.