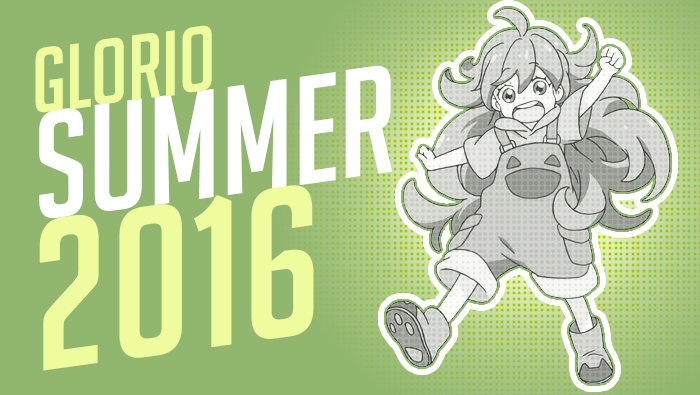 Welcome back to the only preview guide where ‘cautiously optimistic’ is the highest possible praise! In the previous part, you could witness my nominal interest in ReLIFE and Orange, but I’m afraid that charade is conclusively over and done with now. This ain’t a place for no heroes, kiddo. We’ve already seen the best 2016’s summer will have to offer, and it’s only downhill from this point onwards. Get out while you still can. Women and children first. Though, in all fairness, they’re probably getting the long end of the stick this time around.

Amaana to Inazuma, Cooking with Yotsuba

“Sweetness and Lightning” is also the name of my bubblegum-pop-slash-trash-metal band, but hey, I won’t sue if Sweetness and Lightning the anime is even half as cute as it looks. We love us some shows about bumbling dads and their adorable daughters here at the Glorio Blog, and I love me some cooking shows, so this combination platter about a widowed math teacher trying to hone his cooking skills sounds about right up my alley. The main question with these kinds of shows, however, is whether they manage to stay interesting. With One Week Friends, Tarou Iwasaki at last showed potential for making adorable shows without lulling viewers to sleep, and a brief glance at the manga shows a welcome variety between individual character vignettes and sequences with the whole cast cooking together. Properly adapting the various recipes featured in the manga without summoning the spirit of Julia Child might prove a bit difficult for a writer with credentials as unimpressive as Hirota’s, but my inner dad wants to give Sweetness and Lightning the benefit of the doubt.

Taboo Tattoo is a vapid manga about a milquetoast guy named Justice (seriously), a girl named Fluesy Bluesy (seriously) and a bunch of jokes about Americans and gay people. You know, just of these delightfully train-wreck-y manga that makes its plot up as it goes along. One of these manga that is a banal sex comedy one page and hyperviolent carnage the next, that throws around swear words like conjunctives and draws nipples on fully-clothed women, one of these manga in which everyone is either a psychopath or too innocent for this sinful earth, in which every member of the latter category gets brutally murdered. One of these manga. J.C. Staff have obviously been dying to find a new fantasy fighting franchise to milk to death after the end of Shakugan no Shana and the realization that Index may have its best days behind it, but they’re really scraping the bottom of the barrel now, aren’t they? The bare-bones animation, lousy editing and even shoddier CGI in the trailer should be enough to convince you Taboo Tattoo is dead on arrival, but if not, there’s still this. You’re welcome.

Rejoice, the long-awaited third part in the Elite Beat Agents trilogy is here at last! Believe it or not, Cheer Boys might actually have the best crew behind it out of all anime of the upcoming season. Reiko Yoshida is a veteran screenwriter with several beloved series under her belt, while Ai Yoshimura – best known for turning Dance with Devils into a musical – is exactly the kind of director you’d want on board for a show as willfully ridiculous as Cheer Boys. The Elite Beat Agents comparison may have been a joke, it’s a rather apt one nonetheless. Judging by the first trailer, Cheer Boys seems to rely on that same kind of flamboyant serious business vibe that has turned many an ostensibly derivative bishounen show into a cult classic before. Anime about clubs coming together around something none of its members seem to know anything about aren’t exactly a rarity, yet the talent behind this production and the genre’s proud heritage of fabulous men posing like their lives depend on it has me convinced Cheer Boys will find its audience.

Anyone else noticed how this season seems to have a heckuva lot of shows aimed at young women? Not that I’m complaining, though. Au contraire, mon frère. Servamp is another show with a cast populated entirely by Abercrombie & Fitch staff, though unlike Cheer Boys, Days or Hatsukoi Monster, the vibe here is distinctly more dark and supernatural. Regardless, Servamp seems to be a relatively straightforward action show, featuring all the popular tropes you’ve come to expect: Servamps are vampires who bond with human partners, all of them are themed after the seven deadly sins, that kind of stuff. Of course there’s an eighth Servamp no one knew about, because nebulous groups of super-people in anime never have the number of members they claim to have, as a kind of twist, in this case he seems to be the bad guy. It’s all highly inoffensive fodder, hardly exhilarating, but bound to please. Unfortunately, the manga’s distinct, angular, brightly coloured art style seems to lose a lot of its charm in translation to the small screen, despite Brains Base’s decent enough reputation, and the strenuously cheesy early 2000’s butt-rock soundtrack, though fitting, all but confirms Servamp‘s position on the middle of the road.

We live in an era characterized by a relentless arms race. The aim? To get as close to straight-up pornography as broadcast law will allow. Hybrid x Heart Magias Academy Ataraxia (does anyone in Japan even know what the word ‘ataraxia’ means?) is an utterly putrid light novel of the rankest and most hackneyed kind: magical military academy, mecha suits that leave breasts and butts exposed, molestation for power ups, our hero becoming a ‘demon king’ with personal sex slave harem, you name it, it’s there. A mere glance at the original books is enough to expose it for the repulsive rape fantasy it is, and the trailer promises we’ll get its endless cavalcade of debasing ‘fanservice’ shoved in our faces on full display. I wouldn’t even wish this upon colons, and he actually volunteers to watch this stuff.

The title “Scared Rider XechS” (not to be confused with Zexcs, the anime studio) sounds like the punch line to a bad joke, though given the fact that it’s another visual novel adaptation, the anime proper may soon follow suite. Granted, I do quite like the stylishly spindly art style, and the setting – a war between the ‘good’ realm of reason and the ‘evil’ realm of instinct – sounds so outrageous it might actually be fun. Ju Kumagai, who previously wrote the Persona 3 and 4 anime adaptations, being in charge is a bit of an ironic twist here, as the XechS boys fight using bizarre-looking spirits called Substances, which might as well be Personas if you squint a bit. Except Substances are named after guitar brands, which automatically makes them a dozen times cooler than Personas. Personae. Persone. Whatever, hot dudes and all that. Leave me alone!

An anime original project by a guy who hasn’t written anything but scripts for Mari Okada shows? What could possibly go wrong? With Sunrise too busy booting up their Love Live! cash money printer, Actas have taken it onto themselves to provide this season’s nebulous original sci-fi fantasy thingamabob with giant robots, though rather than the train wrecks the former loves to spit out when it can’t make Gundam shows, Regalia seems to owe more to drivel like High School Fleet – in that it mostly seems to be about girls made of squishy jelly hugging each other while the occasional giant robot accidentally wanders on screen like it got lost and ended up on the set of an entirely different show. It may seem like I’m grasping at straws here, but I really haven’t got much more to work with. Regalia has been frustratingly vague about what it is, which is especially striking given the fact that it has no source material to fall back on. ‘The peaceful kingdom is attacked by giant robots’ isn’t exactly the most original of hooks, and if you’ve got literally nothing else to show for yourself but some girls being touchy-feely with another, chances are likely Regalia will pass under the radar before it’s even notices the radar is there. Then again, I’ve been known to grossly overestimate the average anime fan’s standards. Otherwise, I wouldn’t be writing this damn thing!

Look, Barakamon was a lovely show, but we can hardly write its success up to main character Sei ‘Sensei’ Handa. Sure, he was the comically serious glue that kept all the shenanigans together, yet it was the kids who were the true stars of the show. It’s surprising then that Sensei is once again the focus of this spin-off. Handa-kun flashes back to six years prior to the beginning of Barakamon, back when Sensei was still in – you guessed it – high school. It’s hard to get excited for a spin-off thats strips away everything that made its big brother interesting, especially when none of the old staff and cast are returning. While Michiko Yokote has tons of experience, her immense workload leads to her adaptation work being bland as bread, and Diomedea isn’t exactly a step up from Kinema Circus either. Judging by a cursory glance at the manga, Handa-kun at least retains Barakamon‘s neurotic sense of humour, but otherwise there’s little here to convince me that this isn’t the most pointless spin-off since The Disappearance of Nagato Yuki-chan.

There’s Something Wrong with This Art Club!

Technically, Outbreak Company still stands on record as our #7 anime of 2013, but as far as I (and everyone else who isn’t Lifesong) is concerned, Feel and their works remain at the lowest depths of our esteem. There’s Something Wrong with This Art Club is their latest attempt to clean up their act, a quirky slice-of-life comedy that looks like a cocktail of virtually every Kyoto Animation show ever made, except the cocktail has been cut with nasty cheap vodka and served in a scummy rathskeller for people who can’t afford to go to an actual pub and the waiter is Kei Okawa and he takes out an icepick and he brutally murders Minami-ke oh god there is blood everywhere what did Chiaki ever do to you–*ahem* Sorry, bit of a trauma there. Anyways, personal vendettas aside, the only person on Konobi‘s crew truly worth mentioning is Naruhisa Arakawa. As main writer on Gokaiger, he proved himself highly capable of writing endearing ensemble casts, but his record has been very spotty ever since. Given how thoroughly average Konobi looks, though, I can’t exactly blame the man if he chooses just to cash his check.

Will these shows turn out to be exactly what it says on the tin, or is the next season one of pleasant surprises and devastating disappointments? Stay tuned for our first impressions as soon as July hits. Until then, look forward to part three of our seasonal preview guide, as we go deep sea diving, run with the mob, try to tell a bunch of generic light novels apart from each other and brace for super duper high school disappointment.