For both Moca and Hanabi, going on a boring date with an insufferable jackass turns out to be the perfect antidote to their twisted pride. Whether that’s a good thing, however, that’s a whole other question.

Remember when Sanae was the most sympathetic character in this entire show, and Moca the least? How the times can change. While she certainly can’t compete with Akane, Sanae’s behaviour last week wiped away the remaining shreds of sympathy I had for the idea of Hanabi and her becoming a thing – what with the whole deriding your crush’s dedication to commit herself to her quote-unquote official beau and sexually assaulting her in public under the flimsy pretence of “you said we couldn’t do this in private anymore, you didn’t say anything about in public”. Sure, Sanae knows Hanabi, probably better than Hanabi knows herself. She knows Hanabi will come crawling back to her the moment her newfound confidence takes another inevitable nosedive. But don’t tell me she’s not fully aware of the damage she’s doing to the person she claims to love. I’ve been fooled before, and I won’t be fooled again. And then Mugi got arrested.

Because I’ve reached this exact same conclusion before, back when I first read the manga, and yet once again, Scum’s Wish managed to fool me into rooting for Sanae to get her happy ending. Nevertheless, her relationship with Hanabi isn’t just abusive in blatant text – but in metatext as well, as the show plays with people’s expectations to make them question their own convictions. Of course viewers want to support Sanae, because twenty-odd years of queerbaiting in fiction has conditioned them to hold out hope for every shred of confirmation popular culture will throw their way… Or because they think lesbians are hot, of course. In any case, Scum’s Wish challenges that dedication, urges us to ponder just how far we’re willing to go in our support for that rare queer pairing that actually has a decent shot of being built to last. What is truly important, it asks, seeing two girls making out with each other, or seeing them happy? Too often, these options seem to be one and the same, but then again, this is Scum’s Wish we’re talking about.

Yet while there is, very understandably, a bit of a taboo on portraying queer relationships as unhealthy or toxic in fandom, Scum’s Wish consistently manages to divorce its judgement on Sanae as a person from any judgement regarding her sexuality. In fact, this narrative simply wouldn’t have worked with a straight relationship, not only because in those, anime tends to already romanticise abuse to a point where people probably wouldn’t even be able to tell the difference anymore, but also because the whole idea of friendship between girls that is so integral to Hanabi and Sanae’s relationship culturally just wouldn’t work the same way if it were between a girl and a boy. By both respectfully representing Sanae as a lesbian and her relationship with Hanabi as unremittingly terrible, Scum’s Wish musters up an integrity that isn’t so much miles as it is lightyears ahead of its peers.

Moca, on the other hand, has quickly catapulted herself to the most mature and genuinely decent one of the bunch simply by not being around for most of the last couple of episodes. In a cast full of apathetic predators, serial abusers and capricious masochists, Moca’s biggest sin is merely looking like she wandered off the set of an entirely different show. Yet like virtually everyone else in Scum’s Wish, she’s fully aware of her own ridiculous behaviour, Her shrill, stubborn, cringeworthy behaviour is a mere ruse, an attempt to create an ideal, animesque world where princes and princesses live happily ever after and virtue and virginity are the recipe for a wholesome love life, in stead of the antidote. As a result, Noriko is just as much a victim of warped expectations as Mugi is – whereas he tries to compensate for his emasculation through subzero coldness and sexual aggression, she hides her lust for validation and physical intimacy behind a caricature of childlike noise and pseudo-Victorian pining.

Back when she was first introduced, I already talked at length about my suspicions regarding Noriko’s mental state, and this episode continued to drop hints lefts and right. Her unflinching obsession, black-and-white, won’t-settle-for-second-best view of the world and complete inability to engage in “normal” social behaviour seem to place her somewhere on the autism spectrum, yet even if she weren’t intended as such, it’s hard to blame her for her behaviour up until this point. Noriko turns out to be a lot more mature than she appears at first, and in the end it’s this maturity that frees her from her own delusions. Yes, she may have “betrayed” her initial ideals, including kiss-off with her confrontational younger self à la Hanabi, but for once in this show’s miserable universe, that actually leads to the adoption of a less toxic lifestyle overall. Upon finally getting what she wants and realising that dating and mating are, after all, just a part of the inherent awkwardness of life, Noriko takes the first steps towards grasping hold of her own sexuality and breaking free of the lies she was told as a child simply because she happened to be a girl. Exit Moca the princess, enter Noriko the woman. 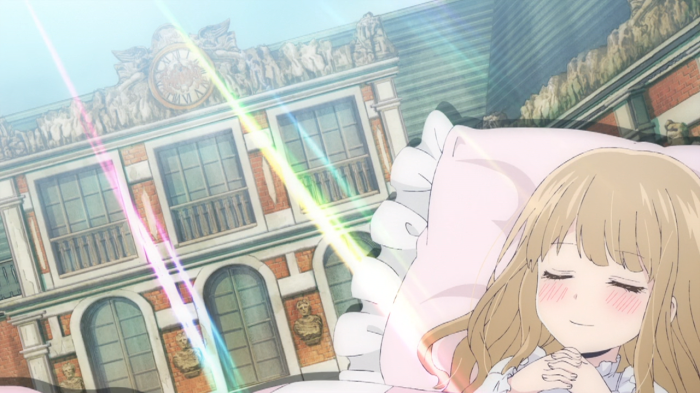 You sure? The place probably doesn’t even have toilets.

Yet for all the screen-time Noriko gets, she’s ultimately still a satellite to Mugi’s overall journey. Even so, when Mugi finally humours her – so to speak – it’s tough to figure out whether that is out of pity, out of bored, anyone-will-do kind of horniness, or out of a more malicious desire to ‘mess her up’, as he so lovingly intended to do to Hanabi a few episodes ago. Noriko is the virgin to Mei’s whore, a being he simply cannot envision as a sexual target. Even if he may have a certain fondness for her, her sexual unavailability all but disqualifies her from girlfriend material in his eyes. But where does that put Akane? Even though his attraction for her is clearly sexual, he obviously doesn’t see her as a mere stand-in for his right hand either. Is it her deliberate exploitation of his madonna-whore complex that lands her somewhere in the middle, or is it the unattainability that makes her transcend the standards by which he judges any other woman?

And then there’s Hanabi, whose position on the madonna-whore scale isn’t so much impossible to pinpoint as it is constantly in flux. She comes on to him, then backs down when push comes to shove, and their shared anguish and abuse has somehow brought them closer together than they’d ever imagine. At this point, their love lives are so closely interconnected that Hanabi can’t even decide to fess up to her crush without the knowledge that Mugi will do the same. As happy as I am to see her realise that the only road out of this smouldering train wreck is the high road, getting spectacularly turned down won’t make their lives any less complicated. It’s only a matter of time before Hanabi falls head over heels for someone else she can’t have – in fact, it seems to be her only prerequisite – and the question remains for how long she’ll still be able to rely on Mugi for sharing the same fate. After all, Akane is not known for turning people down.

Mirror, mirror, on the wall, who is the most kawaii of all?