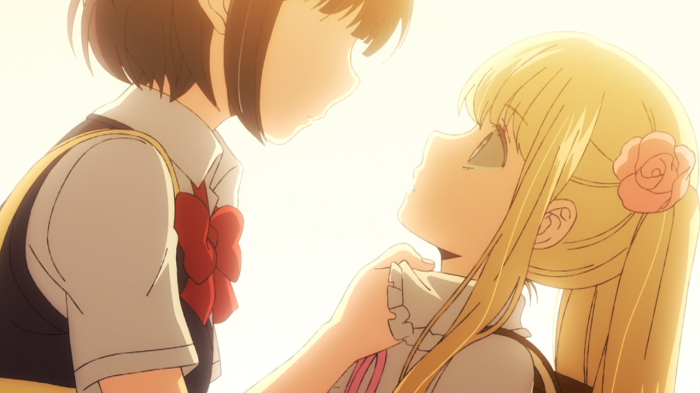 “I’m Here For That Warmth”

Hanabi and Mugi’s relationship starts to attract some attention, and not all of it positive. While Mugi’s jealous childhood friend attempts to annoy Hanabi into giving back her one true love, Sanae Ebato seeks to cut some pesky spacing from her current status as Hanabi’s only girl friend.

Yeah, that “confrontational journey into the darkest corners of the human mind” I promised? Still a bit of a work i process isn’t it? This second episode was a rather lacklustre showing for Scum’s Wish, marred primarily by the presence of Noriko “Moca” Kamomebata, a nettlesome scamp who’s unique among the cast in that any reason to despise her are entirely unintentional. Clumsily introduced as Mugi’s kindergarten playmate, Moca loudly announces her displeasure at his relationship with Hanabi in one of several inappropriate scenes straight out of Love, Chunibyo and Other Delusions and so considerably amps up the frequency with which Scum’s Wish changes moods. This pushes the unsettling atmosphere and character development to the fringes in favour of the same brand of vaguely farcical shenanigans to which this show should be the antidote. Worst of all, a lot of the manga’s navelgazing was cut to make way for her regurgitated antics, making me wonder if the people in charge here have their priorities straight. It’s unfortunate, because Moca – or rather Noriko, the actual person behind the sloppy Dekomori impression – isn’t a bad character per se. There’s a lot to be said about how her introduction as Hanabi’s annoying sitcom arch-nemesis makes their later, far more spiteful interactions much more effective, or how she’s the only character in a show driven by people digging themselves deeper with bad decisions to passively sit and wait around for the happiness she feels entitled to to drop right out of the sky. Where Hanabi greedily chases after the slightest shred of attention and affection, Noriko embodies the deluded, single-minded persecution of a single perfect vision, not unlike that out of a fairy tale. In her mind, the desire to relive one innocuous moment of childhood bliss has become the very fundament of her entire existence, and Mugi is the only piece of her puzzle she’s still missing. That’s why her beef with Hanabi is about more than just jealousy – Noriko simply can’t envision anyone in a situation similar to hers being willing to settle for second best. Her obsessive perfectionism and tendency to give enormous weight to words others might not even remember elevate her neuroatypicality to a level of realism few other characters in her – surprisingly crowded – class ever expose. It’s a bummer then, that Scum’s Wish doesn’t really give it the attention and respect it deserves. When push comes to shove, an ill-fitting character design, Shiori Izawa’s shrill performance, and both the manga’s and the anime’s inability to portray her as an actual human being ultimately make Moca a bit of a waste of space and screen time in the bigger picture, an “accursed relic” of the show’s ancient past as a conventional high school love story – soon to be shoved almost entirely out of the picture by… Well…

Enter Sanae Ebato, patron saint of tragic anime lesbians and not so secretly mangaka Mengo Yokoyari’s favourite character. Following Nick Creamer’s apt interpretation of Scum’s Wish as “Toradora, but problematic” – or, well, even more problematic, in case you’re Marlin – Ecchan is the Minori of the bunch, the quiet rock who invests maybe a tad bit too much in her friendship with the main heroine and eventually realises mere friendship won’t cut it anymore when the heroine in question starts getting too comfortable around someone else. Like Noriko, Ecchan similarly clings to a very simple idea of what happiness looks like – her, Hanabi and no man in sight – but ultimately finds herself looking at the struggle from the other side of the metaphorical river. Ecchan is the only character in the entire cast who starts in the belief she has everything she could ever need. Rather than fighting for what she wants, she has to deal with that happiness slowly slipping away. In this regard, juxtaposing her introduction with Noriko’s works wonders, as the seemingly aloof disdain she expresses for Moca’s near-constant, at times pathetic grovelling for Mugi’s attention quickly turns to shame when she realises her hormones aren’t any better at being kept in check. Congratulations, Ecchan, you’re scum! But don’t worry. Everyone here is. All things considered, Ebato’s story probably isn’t all that different from something you’d see on an episode of Degrassi or an early 2000s European indie teen drama – all the way from “why am I nervous about a slumber party with my best friend” to “oh dear God I just kissed her full on the lips”. Nevertheless, the fact that she one, actually gets to have some on-screen action with her love interest and two, not have it be treated as a punch line to a particularly distasteful joke, is probably enough to lift her story a notch above how queer sexuality is usually portrayed in anime, even if heartbreak seems all but inevitable. The saddest thing of all, however, might just be that said story comes all too late. People seem to be so fed up with the omnipresent bait-and-switch in anime at this point that they’d rather switch their brains off and indulge in shows that maintain only the most superficial illusion of la-la-land lesbianism, than to watch a show that dares to promise a more realistic take and risk a knife in their backs. Scum’s Wish makes markedly obvious that we’re dealing with genuine, complex romantic and sexual attraction here, but those looking for a happily ever after here should probably go in expecting the worst.

Then again, this is still Scum’s Wish we’re talking about, a show characterised by an all too human unpredictability even when its characters are as obstinate as your textbook infectious disease. With all the pieces are on the board the anime’s all ready to kick the downward spiral into overdrive, even though some of its teething troubles still need to be sorted out. Because this groups four manga chapters’ worth of individual, alternating scenes into three vignettes, for instance, the pacing is stilted and somewhat artificial, which could possibly explain why the first fifteen or so minutes – collecting all of Moca’s antics into a single gauntlet run of overdone tropes and headaches – feel like they’re from a different show altogether. Darkening the mood into something more appropriate for some of the highly questionable crap going on is one thing Scum’s Wish will need to fix, but if it truly wishes to live up to its potential, it really can’t go on ousting its source material’s more cerebral musings in favour of only the clichés they’re meant to counteract. It’d be a shame to see so much good go to waste in the care of a well-intentioned, yet ultimately somewhat flawed presentation. Granted, Scum’s Wish could get by on the strengths of its tragic source material alone if it really wanted to, but honestly, if it didn’t at least try to be anything more, that would be the biggest tragedy of all.