Sawa finds a clue as to Sentou’s previous identity, which leads him to reunite with a figure from his old life.

It’s another bizarre episode for Build, as the pacing issues we’ve spoken about before continue to cause the plot to ping-pong back and forth between humour, gravitas and everything in between. We’ve got some theoretically big reveals in this episode that fall kind of flat, yet some strong character and detail work keep the show moving forward well. I just wish it could be a little more consistent about it.

The biggest reveal we get is of course the revelation that Souichi was the astronaut who discovered Pandora’s Box on Mars in the first place. Furthermore, he also caused the Skywall tragedy and infiltrated Faust to rescue Misora after she was kidnapped. That’s quite a rap sheet, yet the show chooses to dispense this information in the dullest possible way, via extended monologue while everyone else sits around and listens. Furthermore, it doesn’t actually seem necessary for this much information to be revealed at this time – knowing all this stuff has pretty much no immediate impact on what’s happening right now aside to get the show out of the cliffhanger it cooked up for itself at the end of last episode. It’s not actively bad, but it does seem like a waste of a lot of dramatic potential. I guess we’ll see where they go, but I wasn’t too enamoured with the revelations here.

In theory the other ‘big deal’ of the episode is Sentou’s discovery of his previous identity. This one doesn’t really land hard either, but that’s because it’s almost entirely played for laughs, something I can respect because there’s certainly some good chuckles to be had out of dumb J-Rock star Sentou. The other reason it’s hard to feel much impact from this is because I’m almost certain it’s a fake-out of some sort, although it could go either way. I don’t really feel that the show does a good job of evoking sympathy for Kishida in the short time we have with him, mostly because he’s almost exclusively played for comedy. That’s fine but it does mean it’s probably the least sympathetic I’ve personally felt towards a Smash victim so far.

What saves this episode then is the small things – good jokes and strong character writing. I like what I’m seeing of Blood Stark so far – he’s enjoyably hammy and his more gregarious, gloating style contrasts well with the more mysterious, distant Night Rogue. The relationship between Sentou and Ryuga is also blossoming really nicely. Their switching between genuine argument and playful banter is fun and highly entertaining, and given how many past Rider series have hinged on good interplay between the leads, that’s a very encouraging sign. The ending of the episode is a great twist on that relationship and it’ll be interesting to see where they take that newly hostile atmosphere. Build frustrated me with this episode, but it’s also just starting to develop its plat, so it’d be churlish to hold too much against it right now. 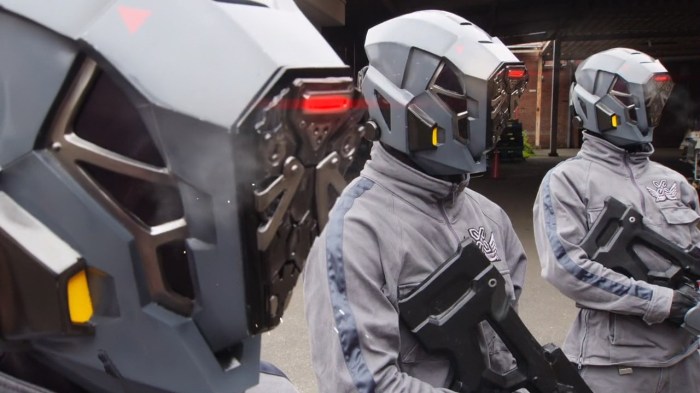