Sawa and Ryuga attempt to rescue Nabeshima’s family in Seito, while Sentou confronts the man himself in a new, more powerful Smash form.

I’ve noted repeatedly the incredibly fast pace that Build has taken over its first handful of episodes, and while that’s made for fun and exciting television there’s a price to be paid for that. I think this shows here, in what’s the most uneven episode yet. There are moments of great potential that pop up, but because Build hasn’t bothered to lay proper foundations for them they’re nowhere near as effective as they could be, and that’s a shame. 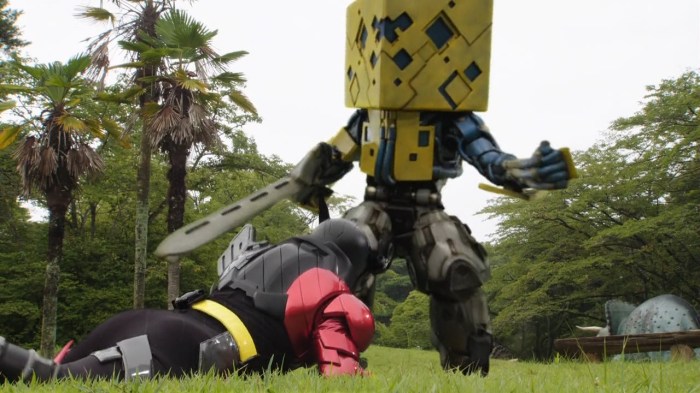 The one overwhelming example of this is the ending sequence, which in theory should be a powerful and emotionally resonant moment. Some of that definitely comes through, but the extreme compression of the story makes the ultimate payoff way less satisfying than it could have been. We’ve had close to zero exposure to Nabeshima as a character, and what we have seen of him has mostly been in the form of a thug complicit in Faust’s conspiracy. At least we do get a relatively decent scene with his wife and daughter earlier in the episode, but it’s still hard to take the finale as the emotional body blow that it’s meant to be. I’ll give them credit for not chickening out though, and making the memory loss stick. It’s the only thing that continues to give the scene any power at all, and it bodes well for Night Rogue’s promise of ‘serious consequences’ should he continue to re-Smashify humans in the future.

Elsewhere this episode sort of scraps along without being exceptionally good or bad. I enjoyed Sawa and Ryuga’s interplay and it helps that they’re gifted the far more interesting plotline, with the aforementioned decent scene with Nabeshima’s family and a pretty great action finale. Sentou’s battle with the Smashified Nabeshima is pretty underwhelming for the most part, although the goofy setting is a new and enjoyable location for a fight. His mid-episode exchange with Souichi is a quick but fun little chunk of dialogue, where Soichi deftly dodges the question, foreshadowing the end of the episode. I’m less taken with the confrontation with Gentoku, which leans a touch close to being an expodump, although to be fair I suspect the revelation that the box has layers is a relatively important one that’ll have long-term repercussions.

Overall I don’t think that my interest in Build is waning or anything like that – the show remains entertaining and the central story compelling, especially given the twist that ends this episode. But as we move away from the opening and more into a fully-fledged narrative, I’d like to see the storytelling tighten up around the edges. On the other hand though, the fact that the show is pulling out enough strong scenes and decent mysteries for me to be excited to see them done better is a good sign, and there’s still plenty of time for things to improve.