Orphaned and plagued by visions of otherworldly creatures, Chise Hatori has sold herself into slavery, looking for a place to call home. Luckily, the mysterious man who ends up buying her has something else for her in mind. Welcoming her into his household, he announces himself as the titular magus, Elias Ainsworth, and claims he’ll make Chise his apprentice… and his bride.

What’s there even to say? The Ancient Magus Bride is one of the greatest new manga of the last five years, and this adaptation gives a decent, if somewhat workmanlike retelling of the same enchanting events. WIT Studio’s version of Kore Yamazaki’s breathtaking manga unfortunately isn’t the billion-yen budget adaptation this franchise deserves, but it’s still an obvious labour of love — with the delightfully bizarre soundtrack as a clear standout. So what exactly is The Ancient Magus Bride, if not for yet another supernatural romance? Above all, it is a story that takes magic back to its arcane roots, ditching the omnipresent urban fantasy or techno-futurist aesthetic and complex rulesets that have practically brought the fantasy genre in anime to a grinding halt, in favour of a more hermeneutic approach with eldritch curses, bizarre recipes and mischievous fae. With its focus on human emotion in the face of indescribable supernatural events, it actually reminds me of Mushi-shi quite a bit — the core difference being that The Ancient Magus Bride actually has characters worth getting invested into. Speaking of characters, perhaps we should get that elephant out of the room first, no? Unless you’re some weird skeleton man who hasn’t talked to a human being in years, you’ll probably have noticed that that’s something not quite okay about the way Elias treats Chise — and, perhaps just as important, how okay she seems to be with that. As a big fan, nay, scholar, of the original manga, I can only tell you not to worry too much. The Ancient Magus’ Bride is fully aware of the various degrees of messed up the initial relationship between Chise and Elias is — it is however a bit too optimistic in its assessment of how long people are willing to put up with raising their eyebrows before realizing there’s nothing supposed to be romantic about all this in the first place. A creepy hermit with no clue of what a bride even is, and a suicidal nihilist who’d unconditionally throw herself under a train for the first random person to give her the light of day obviously won’t make for wholesomeness at first sight — though it takes the manga at least a whole volume to comfortably settle into the gentle, if slightly unusual dynamic we got a taste of in the excellent OVAs. After a couple of adventures, the whole engagement subplot barely even gets mention as a punchline anymore. That might sound a bit weird, given the show’s title, but then again, The Ancient Magus’ Apprentice doesn’t sound quite as catchy, doesn’t it?

Like the mysterious fae, simply nothing and no one in The Ancient Magus Bride is what they at first might seem. The series plays with shoujo romance conventions, Irish folklore, European fairy tales and Lovecraftian tropes alike, exposes the submissive, self-sacrifical nature of its protagonist as a fatal flaw and gently eases the audience into a world of indescribable magic without ever losing its edge or finding itself threading upon a beaten path. Both Elias and Chise are wonderfully multifaceted characters, but it’s often when they take a step back in favour of the weird world they live in when The Ancient Magus’ Bride truly shines. The visit to the land of dragons, the confrontation with the blight of cats, the story of Joel and his lover — I can’t wait to see them all animated. Yeah, the directing may be a bit uninspired. Yeah, the lack of nuance in the anime’s portrayal of the ariels is disappointing. Yeah, Crunchyroll’s subs lack the baroque charm of Seven Seas’ manga localization. But I’d be lying if I told you this first episode didn’t enthrall me like reading the manga for the first time did. Watch this show.

Iro’s verdict: Not Engaged Yet

If I hadn’t seen the OVAs beforehand and gotten what is presumably a more correct impression of this show, I’m not sure I’d keep watching. Thankfully, I have and will, but that didn’t stop me from kind of cringing every time Elias pulled some stereotypical shoujo line out of his skull face. This show’s got that marking-cliches-on-a-checklist feel that’s cropping up more often these days, with Elias playing the role of the borderline-abusive-but-look-he-still-cares boyfriend and Chise’s uncomfortably low levels of self-respect. I have very little patience for these bundles of tropes in particular, but Aquagaze assures me it drops off quick, so I’m willing to stick around. Here’s hoping.

Zigg’s verdict: I Can’t Believe My Skeleton Magician Master Wants To Marry Me!

I’d be a lot more concerned about this if I hadn’t watched the fantastic OVAs, which clearly establish this as a gentle, emotional story about magic as a metaphor for finding your way in the world. There’s a bit of that in this first episode, but there’s also an uncomfortable amount of half-naked teenage girl being collared and cuffed, and an equally uncomfortable amount of weird skeleton-head talking about marrying her. Elias’s line about Chise now being his family is clearly meant to be reassuring, and it’s easy to see how his mannerisms are meant to be ‘unused to interacting with people’ but the writing isn’t good enough to give the necessary nuance to these statements, and the result is he comes off as an overly affectionate creeper. There was good stuff here though – I love the very old-school presentation of magic, with the Fair Folk being an untamed force of tricksters, and the show looks nothing short of magnificent. This one needs a little time to grow but I have confidence the end result will be splendid. 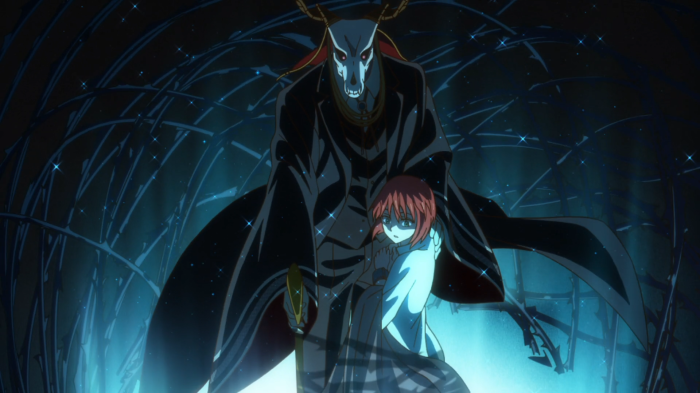 Artemis’ verdict: Wishing On A Star

First off, if you haven’t already seen the 3-episode OVA that aired between September 2016-2017 then you really should. It’s not necessary to understand what’s going on, but it’s great little anime in its own right that also just happens to provide a little extra backstory. This full TV series is evidently set some years later, and I’m predicting that it’s going to be one of the most compelling shows of the fall season. I say this despite the potential for creep going on here, because while it would be incredibly easy for The Ancient Magus’ Bride to slip into exploitative territory, I really want to believe it isn’t going to. Admittedly, I’m already somewhat frustrated that this is even an issue here. I mean, is that relationship dynamic even necessary to the plot? Would it actually detract from the story if they simply removed that aspect altogether? However, I do notice that the camera appears to have zero interest in leering, and that Elias himself seems more interested in trolling Chise than in being any kind of sexual predator. Putting these issues aside for the moment though, I genuinely see the capacity here for a unique, absorbing, and poignant series, and I’m very interested in seeing how things play out.