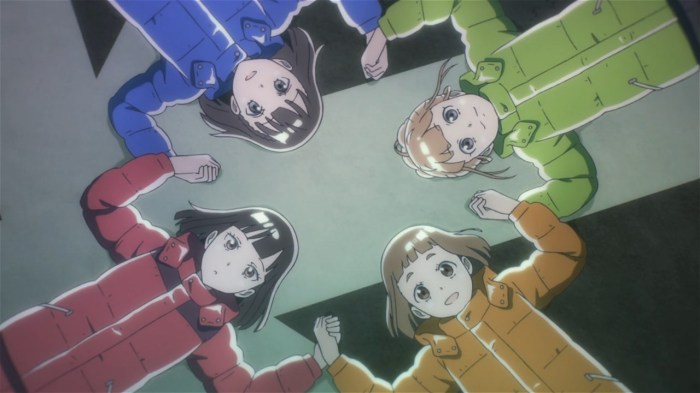 Presented by ‘A Place Further Than The Universe’: Official winner of the Winter 2018 Cute Anime BATTLE ROYALE. Please do not drive or operate heavy machinery while enjoying.

What can you find in a place further than the universe? Well it turns out you can find big laughs, big tears, beautiful moments and whole lot of love from the Glorio Crew.

I said in the First Look that this show sounded close to being a parody of the ‘four cute highschool girls do a thing outside of their wheelhouse’ genre, and all that really proves is that stories are so much more than just their premises. While A Place Further Than The Universe might not have possessed the most original or inspired premise, in nearly every other way it was a tour-de-force of anime production. The surprise was part of the charm of course, but even with the benefit of hindsight it’s easy to see this is already a frontrunner to be one of the year’s best shows. 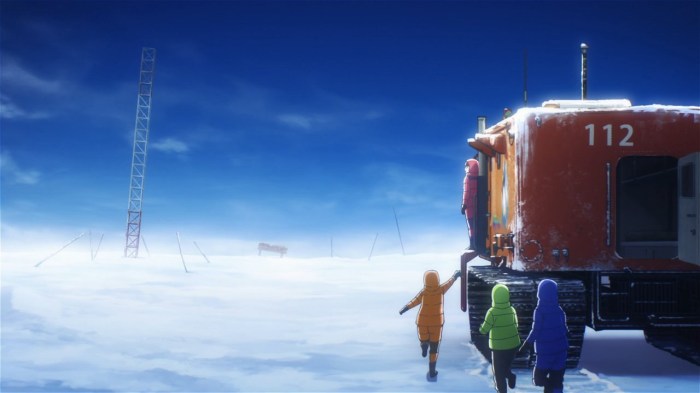 The key to what makes Universe so good is that while it often trades in the standard tropes of the slice of life show, it’s always willing to go further and deeper into what’s actually behind them, as opposed to just settling for the surface level fluff. There’s a depth to the characters and a believability to their motivations that helps the story feel, if not more realistic, then more emotionally resonant and  affecting. It’s helped by each of the girls being distinctive and different enough for them to work well as a true ensemble, both agreeing and occasionally fighting amongst themselves. I wouldn’t necessarily describe it as epic interpersonal conflict, but the show is great at showing the lingering effects of jealousy, regret and a good old fashioned desire to stick it to someone.

I think another thing which makes Universe work so well is that at its core it’s powered by a tragedy. Despite the very peppy, girl’s-own-adventure tone of their journey, there’s never any doubt that Shirase and co’s pilgrimage is ultimately driven by her desire for closure above all else. Kimari, Hinata and Yuzuki all have their own objectives and some are better than others (I’m not an enormous fan of Yuzuki’s ‘what are friends’ schtick to be honest) but Shirase’s quest for some remnant of her dead mother is what drives the story’s most powerful moments and its greatest triumphs. I think perhaps the strongest aspect of the writing is how it manages to combine the essentially sad nature of Shirase’s journey with the way her friendship with the crew is gradually healing her. There’s tangible development for all of our heroines throughout the run of the series, even for Kimari, who is the most traditionally ditzy of the four. Universe remembers that by making its characters open and human, rather than walking, talking cliches, it makes them that much more relatable and the big emotional moments that much more powerful.

Universe is also blessed with superb production values throughout – terrific animation by Madhouse, whip-sharp directing by Atsuko Ishizuka, and wonderful, perfectly cast voice performances by pretty much everyone. Obviously the show nails one of the most important visual aspects by depicting the bleak, barren beauty of the Antarctic coast, but it’s also great at the smaller, more mundane details – the bright lights of downtown Tokyo, or the bare utility of the icebreaker or the base camp. Ishizuka’s smart, incisive direction means the show is never boring to look at and her eye for a great shot adds a huge amount to the visual storytelling of many scenes. Jokes about insert songs aside, even the music is great, again capturing the essential balance between peppy highschool adventure and something more meaningful.

In the end, I’d say A Place Further Than The Universe is the platonic ideal of an anime – it has next to no weaknesses, and abundant strengths. But to sum it up that neatly kind of sells the show short. What Universe has is something which only the very best shows do, which is the ability to make its characters leap off the screen, to make them so much more than a collection of tropes and tics. The ultimate goal of any piece of fiction is make us invested, to make us care what happens, and on those grounds Universe is a masterclass. It goes to prove that even from the most well-worn premises you can craft something very special if you’re willing to put your heart on your sleeve.

Now, please, a sequel where they go to the moon. 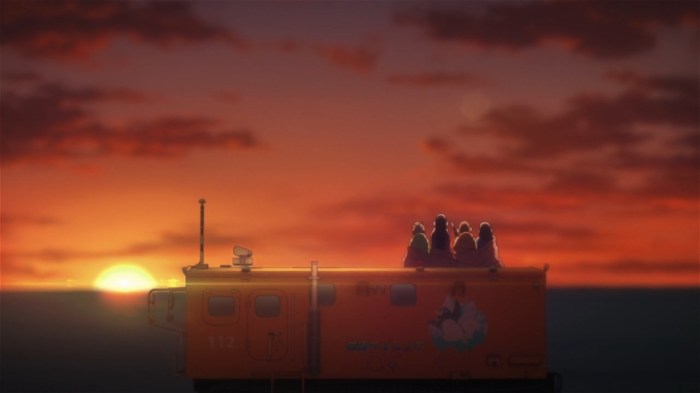 They say it’s about the journey, not the destination – so it’s pretty fitting that the to-do list (started but never finished) in Kimari’s diary (same) says that she wants to “go on a journey without a plan”. That’s the dream, yeah? Go out there and do some thing and some measure of completeness will surely find its way to you. Or you to it, I guess, since it’s supposed to be a journey, right? Yeah! I guess we’ll just go, uh… where, exactly? And what do we do when we get there? Kimari’s got it damn lucky, to have Shirase fall into her lap with the “where” and the “what” tied up with a nice little bow. She’s even got a “why” packed in! Convenient.

Major bullet point on my list of reasons why I like this show: there’s a goal, and we’re working towards it. The girls aren’t just hanging out eating comically large pastries or playing expensive rock instruments or drawing manga or whatever; they’re going to goddamn Antarctica, and each episode has something concretely working towards that. And they don’t slouch, since it turns out heading way down under is tough for trained specialists, let alone high school girls. With so much prep to be done, we can save the bulk of introspection and self-actualization for once we’re there. Or at least, on our way.

Once we’re rolling, the vibe tends towards the usual sugary friendship aesops of a “cute girls do cute things” show, but with more depth than usual. A salted caramel, instead of brute force sweetness. There’s an understanding that sometimes people are callous, or spiteful, or perhaps merely foolish, and that a tearful hug isn’t always the end of that particular journey. It is sometimes – this is still anime, after all – but not many other shows would be willing to eschew a routine reconciliation for a good, meaty “Fuck You!” in as many words. It’s not supposed to be about the destination anyway, right? We sail right past the “normal” stop for the one closer to the truth of things.

Still, we had that goal to find that eponymous place, and Shirase reaches it in Episode 12. The fears inherent in any quest are actually brought to light, which is certainly more than I expected. What’s supposed to happen once we reach “There”, once we do “It”? What if nothing changes? I think the “journey before destination” platitude wouldn’t exist if these fears didn’t, if we could be completely assured of reaching that promised land. But that makes those final moments as powerful as they are, because Shirase finds nothing at her destination other than evidence of her journey.

And so, the show posits, we can all find meaning in the journey even if we aren’t quite heading to (ahem) A Place Further Than the Universe. A hoary old proverb to be sure, but one presented with genuine heart of a rare quality in this industry. We say there’s a sleeper every season, and this one fits the bill, an early contender for the year’s best and a show that’ll stick with me for a while.

11 thoughts on “Final Thoughts: A Place Further Than The Universe”