Adapting the 7th major arc of the Fate/Grand Order mobile game, Absolute Demonic Front Babylonia follows blank slate mobile game protagonist Ritsuka Fujimaru and literally-grown-in-a-lab female lead Mash Kyrielight as they enter “The 7th Singularity” (the past six weren’t popular enough to get adapted into anime, except the 6th which takes place right before this but won’t air until 2020 at the earliest) – the eponymous “Absolute Demonic Front” in Babylon, 2600 B.C.E. – to prevent the extinction of humanity. Also, there’s a weirdly high number of butt shots?

Even as the resident Fate fan, I don’t play Grand Order (anymore; I did a brief stint during it’s JP launch, long before any NA release was announced). In my opinion, it focuses on all the wrong things about the franchise, and fundamentally isn’t as appealing to me as certain other spinoffs, like last season’s Lord El-Melloi II Case Files. This show doesn’t help FGO‘s case, seemingly starting from the assumption that the viewer has already played the game up until this point (a monumental task as it is) and putting forth zero effort towards on-boarding anyone else. Other than a scant few spurts of action, it feels lifeless. Events occur with no context or meaning, scenes following each other like dinner courses at a fancy restaurant serving nothing but dry toast and tepid water. There are other things in the franchise that I’d label as “worse” than this premiere – there’s no doubt about that, even with FGO‘s frankly upsetting amount of unnecessary ass shots – but I’ve never been so bored by a Fate product before.

Doesn’t help watching this in light of the excellent Lord El Melloi II, but even without that show it would be obvious what an uninspired cash grab this is. So much time is spent just explaining what’s going on that I’m not even sure who this is for. If they wanted to make an anime for fans, they didn’t need a 6 minute intro, and if they made it to draw in newcomers I’m not sure how ten seconds of Mash butt are really gonna cut it when the episode is mostly patented walk ‘n’ talk fate babble. It’s like someone was tasked with playing the game and then making a script without trying to actually flesh out the interior in a way that would actually play on a full-lengthed TV show. Additionally, it’s clear this show has at least some budget considering the motions they were letting their main characters do in idle moments, so why cut corners on the laughably bad looking CG lions in the distance? It just smacks of the most dull corporate greed made manifest. 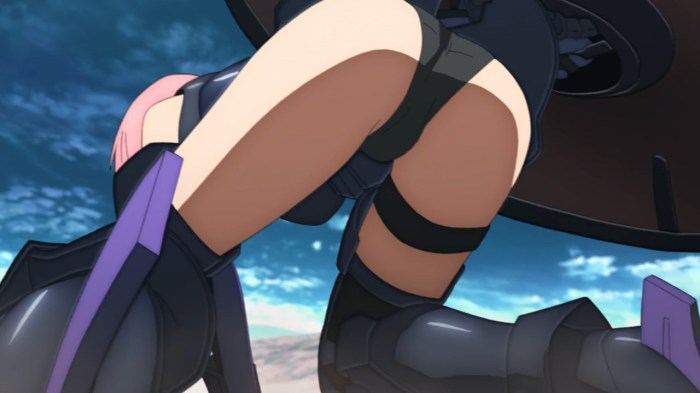 I feel like every one of these writeups I do for the various Fate spinoffs is basically the same – interesting premise and potentially fascinating blend of real history and mythology, which inevitably is spurned in favour of dull, overly complex rules lawyering and a total lack of interesting characters. This one isn’t any different unfortunately, and it compounds those problems by opting to drop us right into the middle of a storyline without any buildup whatsoever. So we get absolutely no character backstory, world building or even a token attempt at explaining what the actual base premise of our adventure is. Honestly, if i hadn’t watched the OVA prequel and various other Fate material I’d have been even more lost, as it was I was merely bamboozled and bored. The action is merely passable, the fanservice of both kinds gratuitous and offputting, and the recycling of popular character designs (except now in way fewer clothes) laughable. This seems like it was made exclusively for superfans of the game, but as someone outside of that group it’s just an impenetrable mess.

If last season’s El-Melloi II Case Files was a brief reminder of how deeply entertaining the Fate universe can be when it’s willing to plumb the depths of its distinctive brand of urban fantasy fiction, Fate/Grand Order: Absolute Demonic Front Babylonia is a pretty good summation of the contrary. How tiring Fate’s domination of the Type/Moon universe has become. How boring it is that every conflict and character revolves around the Grail Wars. How much the universe’s potential actually constricts with every new Servant added to it. FGO is pandering at its worst. No attempt is made to onboard viewers unfamiliar with the game. Nobody talks about why the conflict matters or why we should be compelled by these characters. Events and dialogue feel disjointed, as if the anime is just pulling disparate scenes from the original mobile game and just slapping them together in sequence without any attention to whether it flows or not.

It’s pure fanservice, of both the original and gratuitous definition, made purely for preexisting fans. And not that fanservice is necessarily a bad thing, Gundam Build Fighters was a delightful buffet of Gundam fanservice, drawing  interesting concepts from its venerable three decades of material. In fact, that is exactly what El-Melloi II managed to do so effectively. If I’m being charitable, it’s hard to tell if FGO fails to do the same because of the inherent weakness of its source material or the weakness of the adaptation. Either way, I can’t recommend it. El-Melloi II was a glimpse at what the Fate universe could be at its best, FGO is the stark reminder of what it has actually become.