Wait, what? 3D people on my animu blog? Yes indeed, the Glorio Blog has decided to start covering Tokusatsu, aka the ancient Japanese art of men in rubber suits beating up other men in rubber suits while everything behind them explodes. We’ll be starting with one of the longest running and most renowned of all ‘Toku’ series, Kamen Rider. On board for the ride we have Dragonzigg, veteran of many Kamen Rider series, and Aquagaze, a newcomer to the world where punching anything will make it explode. Did I mention there are explosions? Together they’ll attempt to make sense of the madness. It’s showtime!

Summary: Detective Rinko Daimon is summoned to the scene of a crime only to find herself and her team confronted by ‘Phantoms’ – powerful magical beings hunting for something unknown. Unable to hurt the creatures, she’s rescued by a mysterious young man named Haruto Souma, who has magical powers and the ability to transform and battle the Phantoms as Kamen Rider Wizard.

Aquagaze’s Thoughts: Tokusatsu requires its fair share of suspension of cynicism, something I have been having way too much of lately. It is idealistic escapism at its very finest, though over the years, it has turned into a genre helmed by a passionate crew of talented people dedicated to making it actually something worthwhile. Or so I heard. Kamen Rider Wizard starts off a bit standard, but can you blame it? Every hero needs an introduction and Wizard seems to keep the backstory to itself for now in favour of instant butt kicking. Wizard’s swagtastic dance battling skills and Wanted-esque bullet bending are a whole different world compared to the air flailing the Power Rang– I mean, Super Sentai shows I used to watch are known for. The idea of the villains trying to drive certain people to utter despair so they become one of them is a great idea that can give rise to some interesting story arcs. I’m interested to see if Wizard can make me into as big a toku fan as Zigg is. As long as that belt stops singing. 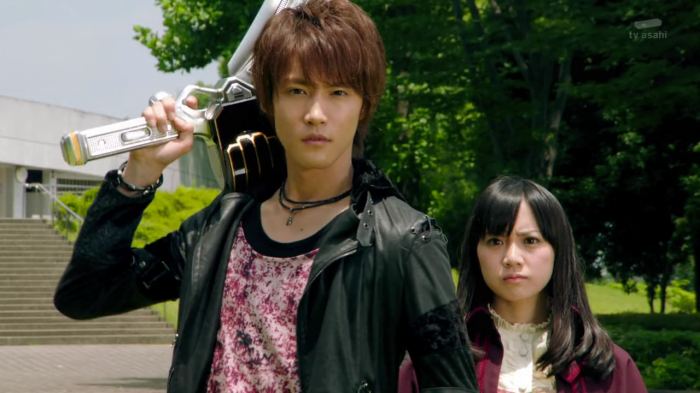 Dragonzigg’s Thoughts: Last year’s series, the irrepressibly goofy Kamen Rider Fourze, was something of a divisive show among the fandom. Judging by this first episode, Wizard is a retreat to slightly safer ground, as well as a return to a slightly edgier tone for a franchise many felt was becoming excessively silly. It’s the first time in a couple of years we’ve had a Rider enter the fray fully clued up and experienced in battle and this episode wastes no time in establishing that, throwing in a pair of great fights as Haruto first shows he has no problem is blasting the crap out of this season’s mooks, then takes down the monster of the week in ultra-flashy fashion. Ever since I first saw it I’ve loved the look of the Wizard costume and its a really stylish bit of kit in motion too. I’m less sold on the singing belt, which might actually talk *too* much (although the ‘Henshin’ effect is so stupid its hilarious) and the elemental form changes are so predictable it’s all feeling a little tired by now. However, the ring-based magic system looks like it might have some legs and the robot animals that have been obligatory merchandising opportunities in the post Decade series at least make sense here as magical familiars.

The real meat of the show though, and the reason why I’m excited, is the narrative. The core monster summoning idea this time round, namely that Phantoms can only be summoned by breaking the spirit of a human host, is magnificently twisted and has the potential to go some really dark and interesting places, and the overt suggestion that Haruto himself is a failed example of this adds a personal edge to his conflict as well as strengthening his heroic credentials. I’ve some doubts about Shunya Shiraishi’s (Haruto’s actor) ability to pull off anything that deep – he manages to look pretty and act cocky here, which is pretty much Rider 101 – but given time I hope he’ll be able to forge a deeper character. And the supporting cast is looking good, with Rinko offering us the possibility of a strong female sidekick and the mysterious Koyomi an interesting enigma. based on this first episode, Wizard shows massive promise, but as ever, it’s all about how they move onwards from here.