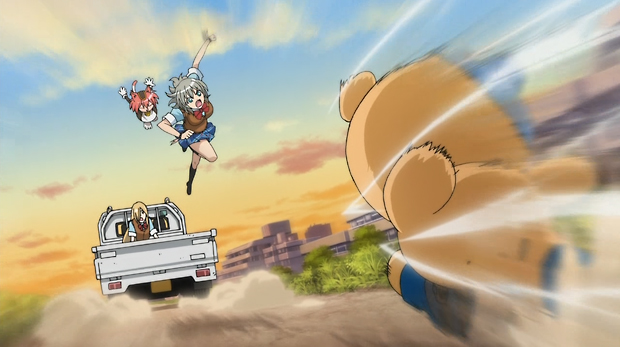 Recap: Kumagai and Momo are determined to transform Momiji back to her old self. Ichiko and Ranmaru are determined to stop them. As two sides face off, it becomes less and less clear who is right and who is wrong. 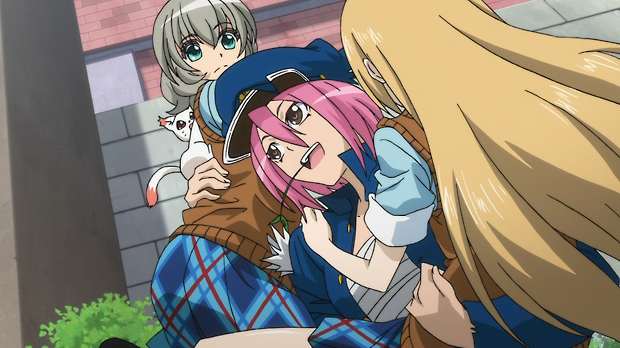 Jel’s Thoughts: Pretty much everything you could realistically want in this episode happens. We get our hilariously intense chase across town, with surprisingly great action scenes. We get all the drama of Ichiko and Momiji sorting out their feelings without getting overly sentimental or out of character. And of course there’s the comedy, keeping me laughing and smiling all the way up to the actual Nadeshiko appearance and the awesome “Binbougami ga! Darkness” preview at the end.

The only faint criticism I can offer is everything does proceed exactly the way you expect. We all knew Momiji would be fine and everything would return back to “normal”, so it was hard to take things too seriously whenever she was in danger. Despite that, I still found myself getting strangely emotional as Kumagai pleaded with Momiji and the final events of the episode played out. So I can’t even really call that a complaint. It was a nearly perfect ending for a series I enjoyed tremendously. There’s not much more to say than that, other than go watch it!

Final Impressions: I summed up most of my thoughts about Binbougami in my catch up post when I picked up the show, so I’d recommend giving that a read first. The last four episodes have only reinforced my feelings and given me more time to think about why I liked this so much more than I expected. So let me try and make this simple without repeating myself too much: Binbougami is just fun to watch.

Of course everyone has a different concept of fun. I’m sure some people will be turned off by the silly parodies and occasionally crass humor. But even beyond the funny bits, I think I appreciate Binbougami most for what it doesn’t do as opposed to what it does. For example, early on we meet Bobby. Bobby is a perverted traveling monk that helps out Ichiko, a pretty common character type for this genre. He also happens to be a big, tall black man. Given the way anime usually handles people of different race, I braced myself for the worst. But as the episode played out, there was only one brief bit about him being a foreigner and that was it. He just becomes a new member of the cast, no one note race jokes or funny accents, nothing.

The same can be said for all the characters really, with no one quite panning out into the one dimensional anime cliché you expect them to. I cannot emphasize how much having well rounded characters makes this show more enjoyable to watch. It not only helps prevent the jokes from getting stale, it allows the cast to grow and interact and make you feel you’re watching something more substantial than an insane gag comedy. That’s not say Binbougami is not an insane gag comedy, but it does prove those two things don’t have to be mutually exclusive.

So to sum it up, if you hate crazy anime comedy, over the top action, surprisingly honest drama, and fun in general, stay away from this series. Everyone else should give Binbougami a look.