Adam Shinjou is a self-proclaimed “supernatural human” – while he is indeed a normal man, he has supernaturally bad luck. No matter where he goes, misfortune befalls him: buses get hijacked, hitmen are after his head, or there will be freak terrorist attacks while he’s just walking about. Fed up with a life of being called a monster by others, he is looking for place to just sit and die quietly when he comes across a strange mansion, housing a young girl. She is Oska, and is in fact a demon, confined to her home because the world is unaccepting of monsters like her. Her wish to see and experience the outside world rekindle Adam’s own spirit, and they figure that if regular folk won’t accept them, they’ll just have to stick together with the other monsters out there.

And the best way to do this? Adam decides that since he never had the opportunity to go to school properly, he wants to create a school for supernatural beings – thus, Choujin Gakuen.

Their grand idea isn’t kosher with everyone, though. Not every supernatural being necessarily wants to be accepted, and others still just want to wreak havoc. There are organizations that see the possibility of a united group of “monsters” as something far too dangerous, something to be stopped at all costs. So, as is typical for a generic shonen manga, all these villainous individuals seek out Adam and his friends, trying to stop him from achieving his goal. And as each one gets defeated in turn, they join his ever-growing posse.

The plotting here is as generic as they come – every character will spout out their traumatic backstory, and it will inevitably make Adam and company cry giant tears of sadness as they try to recruit new blood. Battles ensue, with strange attacks and special abilities popping out all over the place, and the power of friendship always leads to a narrow victory. Choujin Gakuen also follows the One Piece school of comedy: namely, something ridiculous will happen, we’ll get someone explaining how ridiculous said ridiculous thing was, and then we’ll get reaction panels of people making silly faces and exclaiming about how ridiculous that ridiculous thing was. It gets old quick. 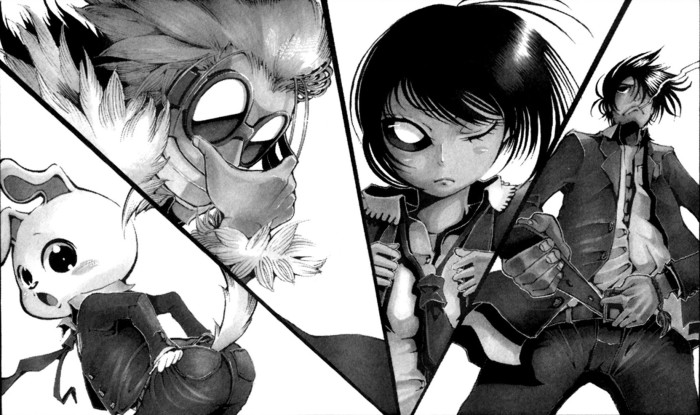 Verdict: Shonen to the Max
Really want to read something where FRIENDSHIP is the most powerful weapon in existence, and all conflicts are solved by copious use of said weapon? You’re probably going to enjoy this one. Unlike most of the manga I try to feature in Random Manga Theatre, this is still ongoing – it seems to be on a monthly schedule, and has around 14 chapters as of this writing. If Choujin Gakuen hits all your sweet spots, then knock yourself out, but if you want something smarter than a slapstick battle manga, look elsewhere.