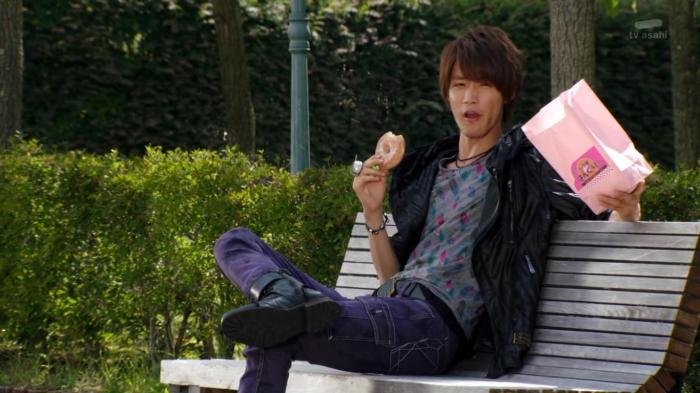 Summary: As Haruto is forced to rest to recover from his mana-drained state, Koyomi, Shunpei and Rinko continue to try and persuade  the Gate to overcome his fear and play in the concert. But Koyomi is clearly still shaken by Haruto’s close shave, and the others dig a little deeper into her relationship with him.

Aquagaze’s Thoughts: Mister Piano Man and the lazy feline supposed to torment him get pushed to the background this week, by none other than Koyomi. This is in no way a bad thing, as the true nature of Haruto’s pint-sized companion was a way more interesting plot point to begin with. What started out last week as a bit of a eyeroll-inducing ‘whiney jealous girl’ tantrum straight out of the more animated side of Japanese entertainment, proved to be a touching story this time around. Koyomi’s worries about Haruto and her refusal to tell ‘intruders’ Rinko and Shunpants saw some surprisingly heartfelt acting. With its constant twists and turns, dramatic moments and a warming sense of wackiness, Kamen Rider Wizard shows aspirations to move away from the grind and be great watch for all different ages. I cannot say anything other than “Hell yes!” to that.

The Rider antics took a considerable step backwards this week. Haruto’s COPY power was certainly cool, but the actual execution -his movements being copied 8 times through crappy special effects rather than having 8 dudes in 8 suits beating up a bunch of mooks- was rather disappointing. While there was no real sense of danger concerning the Gate’s subplot, I thought his characterization and eventual resolution were well thought out. While Haruto did most of the dirty work, Koyomi was the one to avert the crisis and make the Gate change his ways. For once, the Power of Friendship was not enough to save the victim of the week, and it’s nice to see the Big Hero not hogging all the spotlight. I hope to see Shunpei and Rinko will get their chance to get involved in a Gate subplot as well. With more than 40 episodes left, that is almost certain to happen, and Kamen Rider Wizard does not seem keen on slowing down anytime soon.

Dragonzigg’s Thoughts: It’s extremely satisfying to see Wizard placing character development front and centre during these early episodes, and after the good shock revelation of Koyomi’s true nature last week, we get some satisfying follow up that not only explains a little more about her, but about our other characters as well. There’s some (by toku standards at least) excellent dialogue – Haruto and Koyomi’s conversation in the sea is a little weird but conveys some strong emotion and the three way debate between Koyomi, Rinko and Shunpei is predictable in its ‘we’re all the same really’ message but touching nevertheless. While the tsundere is a played out trope (though more so in anime than here) Koyomi manages to flirt with the concept without falling prey to some of its more annoying tendencies, and actress Makoto Okunaka does an excellent job of portraying Koyomi’s spikiness but also softening her personality with some moments of vulnerability.

If there’s one downside to all this character based goodness it’s that Haruto himself is pushed a little into the background this time round, and all the fawning over him, while not egregious yet, doesn’t help flesh him out any more. The pianist’s story ends pretty abruptly too, though it’s a nice touch that he plays badly but is still OK with it. Cat Sithe was such a goofy villain that it was always difficult to take the threat of him seriously, and indeed I felt this final battle was a bit of an anticlimax, despite the army of mooks he throws at Wizard. COPY was a cool sequence but given that we already saw this power in OOO with the GataKiriBa combo it feels a little overly familiar to be truly cool. It’s also worth noting that since Cat Sithe never even manages to inflict despair on the Gate, there’s no Dragoriser battle this time, supporting my guess that we won’t see these in every arc.

Overall though this was a strong, interesting episode which traded in some goofy yucks for slightly slower paced, but important, character development. The truth of Koyomi’s origin adds an intriguing new twist to the story, and the possibility that her Phantom is out there is a tantalising development I’m sure we’ll be teased with in oncoming episodes.