Hello, and welcome to All Your Monies, where The Glorio Blog’s resident toy and figure collecting crew (and Aquagaze) will run down the last week’s new preorders, turning a loving or scathing eye over what’s been put out for you to spend your hard earned cash on. This week it’s a pretty great lineup with lots of cool stuff.  Also, SPECIAL BONUS…THING!

Zigg: I’m kind of torn here. On the one hand, I love the pose here, and Megahouse have done a good job with the outfit and in bringing motion to the character. Love the headphones too. On the other hand, there’s definitely something a little off about that face that I can’t quite put my finger on. It’s no disaster certainly, but not exactly bursting with life either. The real dealbreaker here though is this is a Megahouse online store exclusive, so you’ll have to pony up for a proxy if you want one.

Aqua: I love Rise’s standard Persona 4 Arena artwork, just because it beams with happy-go-lucky vivacity. Megahouse’s incarnation, sadly enough wears a dead-faced expression that simply does not go well with the peppy pose. That’s a pity, because the craftsmanship at work here is on par with Alter, or Good Smile Company. I especially like the metallic finish on her headset, which makes them like exactly like the real thing. Seriously, who the heck thought slapping that expression on a figure with that pose was a good idea? Who?

Jel: I do not have much faith in Megahouse’s ability to make girl figures but Rise looks alright here. Not exactly stunning mind you, as her eyes do look a little dead. But over the sculpt gets the job done and the pink headphones from the Persona 4 Arena art this is based on are a nice touch.

Zigg: This is technically an online exclusive, but Hobby Link Japan appear to have snagged distribution rights also, so you can get it there at not crazy (well, by figure standards) money.  As for the figure itself…it’s OK I guess? I’m grateful for the combination of a smart, character themed swimsuit that’s not too revealing and a happy, relaxed pose, but the detailing still seems pretty rough for a full scale figure and that hair is pretty bad. There’s better things on this very page to spend your money on.

Aqua: Hey kids, time for the Asuna of the week! This particular incarnation of Aincrad’s top chef lacks the dopey expressions that marked some of the previously announced figures, though the face still is not perfect. Her glazed look, combined with a hair colour that seems a few shades too light mar this one quite a bit. For a Beach Queen, it is rather pricey too. I do really like the design of her swimsuit, though. Not only does it match Asuna’s iconic colour scheme, it also neatly references her longcoat by means of a neatly crafted dress. Still, if you love Asuna enough to have her immortalized on your shelf, you’d be raving mad to go for anything that isn’t the brilliant Kotobukiya version.

Jel: Ehhhhh Asuna looks alright I guess but her face is a little derpy and her hair looks like she literally has swords hanging off the back of her head. She does have a unique, relatively classy swimsuit design and the base is kinda different but with the impending flood of Asuna figures I’d recommend saving your money. 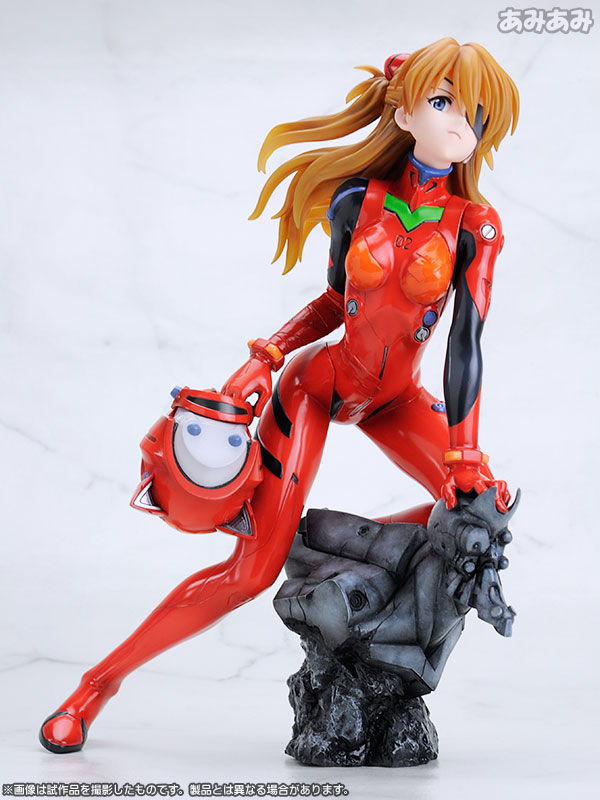 Zigg: I love this to bits. For a start it’s great to see Asuka back in the classic red after waaaay too many figures of her in her…highly revealing.. test suit from Evangelion 2.0.   Furthermore, there’s none of this namby, pamby happy smiling Asuka, no. This one is angrily scowling just like you’d expect, and all the better for it too. I personally really like the kitty helmet, the pose is unique without being over the top and the base is nicely creepy. Outstanding.

Aqua: Sure, we could start a whole discussion about how the kitty ears on the helmet mark the beginning of the holy sanctitude of Evangelion being tainted by the cancerous elements killing the anime industry, but then again most of these ulcers would not exist if it were not for Evangelion. Besides, Celty had a kitty ear helmet too and she was pure awesome. Looks like robbing Asuka of an eye was the final nail in the coffin of the oldest anime debate of all time, and to be honest, it’s hard to wonder why. From the grim rust of the base  over the pompous pose to the wonderful glossy finish of Asuka’s iconic plugsuit, this is by far the best Asuka the very democratic price of 6000 yen will buy you.

Jel: When did Evangelion get helmets with kitty ears??? I REFUSE TO ACKNOWLEDGE THESE MOVIES. Pirate Asuka looks pretty boss though, her powerful pose and that appropriately creepy base are a much more fitting depiction of her character than some of her other figures highlighting her softer side. The eyepatch and aforementioned kitty helmet also make this unique in the sea of Evangelion merchandise, but I suspect this will not be the last we see of Captain Asuka. 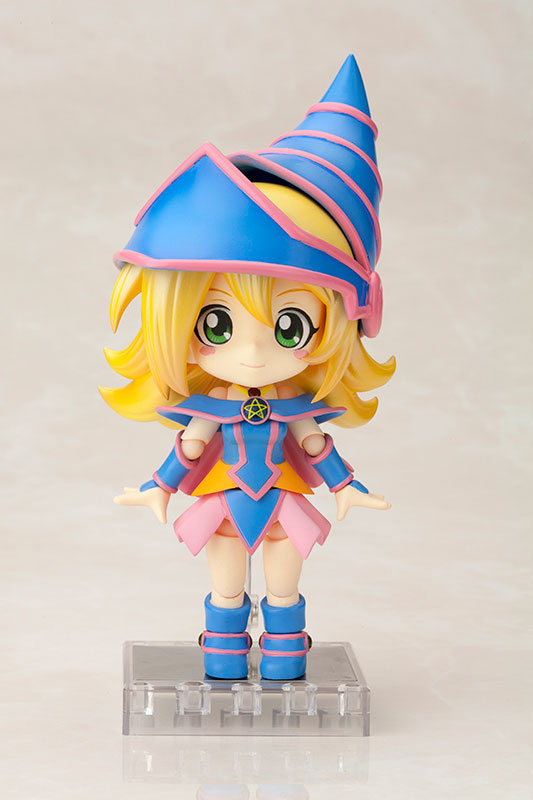 Zigg: I’d say the jury is still out on the attractiveness or usefullness of putting joints on super-deformed figures, but otherwise I have to say I do think this is very cute and the first thing from the Cu-poche line I’d actually consider owning. Dark Magician Girl’s design is reproduced very faithfully, the painting looks sharp and crisp and the combination hair and hat is delightful. Definitely an encouraging sign for the brand.

Aqua: At last they have arrived! Those horrible Nendoroid rip-offs that I picked as my worst of summer WonFest half a year ago! And they are still ugly as sin! Seriously, who thought it was a good idea to give a small-scale figure like this one joints? Yay! Joints make everything better, right? Look at this thing. It’s like 40% joints. Do you really want moveability so much your figure looks like Frankenstein’s monster? 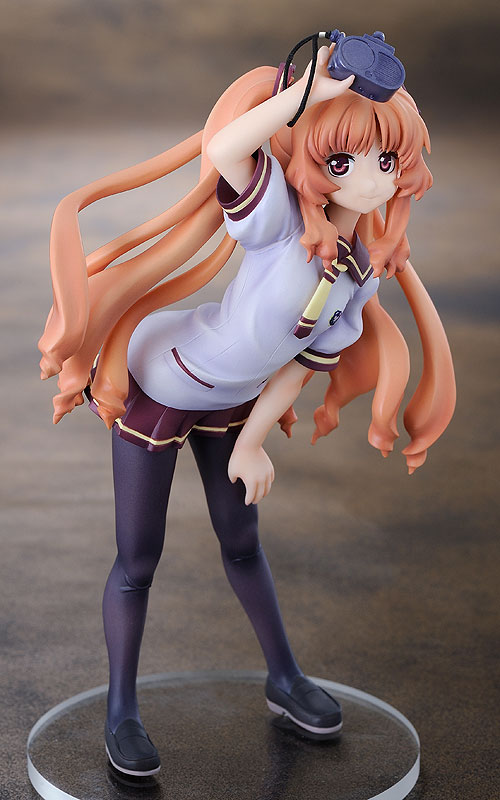 Zigg: I’m just sort of relieved to see a Waiting in the Summer figure that isn’t a) of Ichika or b) is a swimsuit figure. And I do actually quite like Remon here. She’s a little chunkier and more cartoonish than we normally see in bishoujo figures but the look suits her and combines well with the unique pose. It’s not the most detail heavy sculpt in the world but that’s not a huge problem to my eyes, since it’s a relatively simple design. The one major issue is the hair, which looks lumpy and lifeless. Still, it’s cute and charming, and I wouldn’t begrudge anyone buying it.

Jel: I usually get on FREEing for their subpar faces but this one is passable. It’s the rest of the sculpt that’s unimpressive. Once again, details like the folds in her stockings are big and clunky and her hair kind of looks like soft serve ice cream coming out of the machine. And why isn’t her little tie thing hanging down with that pose? This isn’t the worst figure I’ve seen but definitely below average overall. 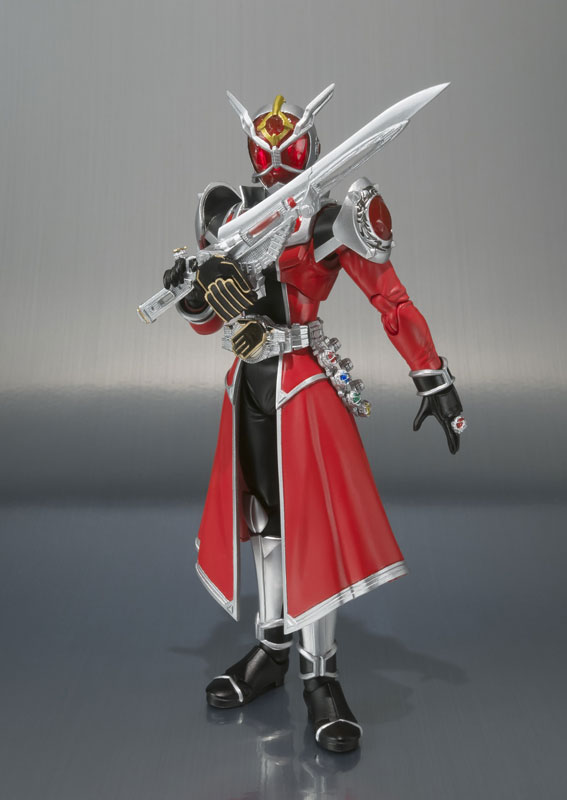 Zigg: Firstly, a note on the weird way these are being distributed. There are five different versions of Wizard, each packed in with an exclusive stand representing a different Heisei era Kamen Rider (Wizard, Agito, Kabuto, Den-O and OOO) and likewise there are four different versions of Machine Winger, again each with an exclusive stand (Wizard again, Ryuki, Blade and Fourze).  Why Kuuga, Decade and Double don’t get one is beyond me.  The figure/bike is exactly the same regardless of which one you order.

With that out of the way, these deliver the usual high quality you’d expect from the Sh.H. Figuarts line. I’m much more partial to Flame Dragon in this toy form actually – the coat loses the nasty vinyl sheen the real one has and on an action figure the armour looks reassuringly chunky and metallic. Fine detailing appears to be well up to snuff too, with the engravings on the armour and that belt of rings both looking very sharp. Almost no accessories  but that’s what you expect from figuarts really, and sort of compensated for by a refreshingly low price.

As for  Machine Winger, it looks like a fantastic reproduction of the show bike, with wonderful detail on the engine and wheel spokes in particular. I’m not a big fan of the design though, which is bland and boring to my eyes. Most importantly, what’s with that rubbish name? From a show that named bikes Tornader, Psychoroader, Ride Vendor and HardBoilder, I expect better.

Aqua: Sure, you could spend another 7000 yen on that swimsuit Asuna, but why would you if you could spend that money on this awesome guy and his ride? Once again, Bandai comes up with brilliant, high quality craft for a very healthy price. Wizard’s slick Flame Dragon Style looks as spiffy as it does in the show, and many of the metallic details on his suit could not look any better. Heck, the Machine Winger even looks like the real thing. Accessoires are limited to Wizard’s gun and that ridiculously stupid Dragon head that can spout from his chest, though, but you can still acquire the expansion pack for the vanilla Wizard Figurarts for all your magic circle needs. 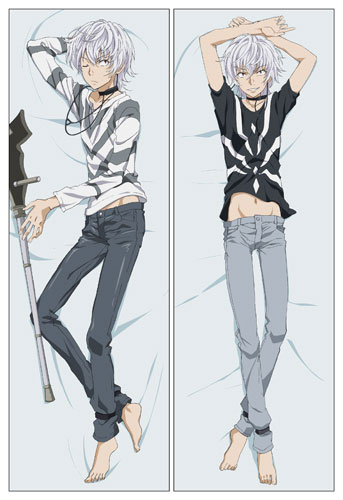 Zigg: If grinding yourself against a psychically powered mass murderer is your sort of thing, then go to town. Just remember that you could buy almost four Figuarts Wizards for this money, and you don’t even get the pillow!

Aqua: To be honest, I’d take Accelerator as my bed buddy over a scantily-clad little girl every night.

Jel: Nothing gets the ladies hotter than a high-tech walking cane. “OOOH BABY, WAS THAT COVERED BY YOUR HEALTH INSURANCE? MMMMM.”