Recap: Haruto runs into an old rival who has reason to hate him

Aquagaze‘s Thoughts: Apparently Haruto used to be a semi-professional football player! It could have been interesting to dive into this side of his if it had actually be somewhat hinted at in the last 37 episodes, but sadly enough, it did not exactly develop him as a character, mostly just serving as a catalyst for this week’s boring victim of the week. That seems to be one of the recurring problems of Kamen Rider Wizard, too much focus on the Gates where they actually don’t deserve it. Kazuya is not an interesting character, and his leg only seeming to be remotely hurt whenever he needs to run away from the Phantom just makes his injury more laughable than tragic. His coach/assistant/groupie/girlfriend/insane stalker, Naomi, is even worse, due to her personality being entirely centered around the fact that she thinks Haruto is some horrible backstabbing asshat while it is blatantly obvious Kazuya’s injury was a (stupid) accident.

While I am happy to learn that Haruto indeed made some sort of thing vaguely resembling a mistake in quitting the team after his friend’s accident, or at the very least not coming back to check on him; it would still have been more interesting to see Haruto having to live with some actual guilt about his actions. It certainly fits his motives. Isn’t he all about saving people? The show seems to push as little guilt as possible onto its hero without making him look like some übermench void of all vice. Most of the time, Haruto just seems to be standing around, not even trying to somehow get involved with the problems at hand. His emotions feel fabricated. Shunya Shiraishi’s tendency to stare into the distance during dramatic scenes further contributes to my theory that Haruto is a complete sociopath who emotionlessly commits complete atrocities just to keeps the Gates safe. Just look at him being a douche to those kids who kicked their ball at Shunpei. Does that look like a hero to you? 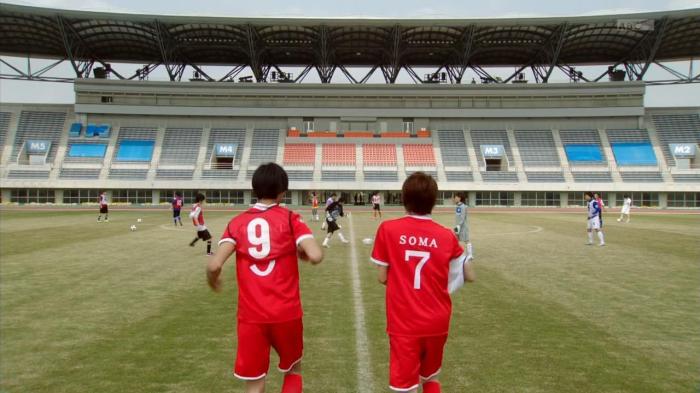 Joking aside, if there is one thing this episode was pretty good at, it was action. Bahamut’s hyper-fast martial arts were a joy to behold, and made him feel like an actual treat to the Riders, rather than an informed obstacle. It was neat to see the Drago Timer being used again, especially since it turned a cool, cinematic battle into a full-fledged Hong Kong kung-fu movie mayhem. It is a bit grating, however, to see both Riders getting their behinds handed to them simply because they refuse to use their ultimate forms. It is an unwritten rule in the franchise that the ultimate form shall only be used to finish the enemy off in the back half of the last episode of an arc, but Wizard‘s strictly swearing by it is starting to defy common sense.

Of course, there is one more important issue to address. Who is the mysterious elderly gentleman who seems to know Wajima? Is he the White Wizard? Wiseman? Both? Is he a character from the movie, just here to introduce a plot point that will lure us to the theatre? It certainly seems that way, though the movie will not be released until August 3rd. Isn’t that a bit early? In any case the purple stone provides at least a minor subplot that is not entirely predictable. Is it the much-rumoured Philosopher’s Stone Gremlin is after, or just another magic stone to be crafted into a ring? We’ll see. 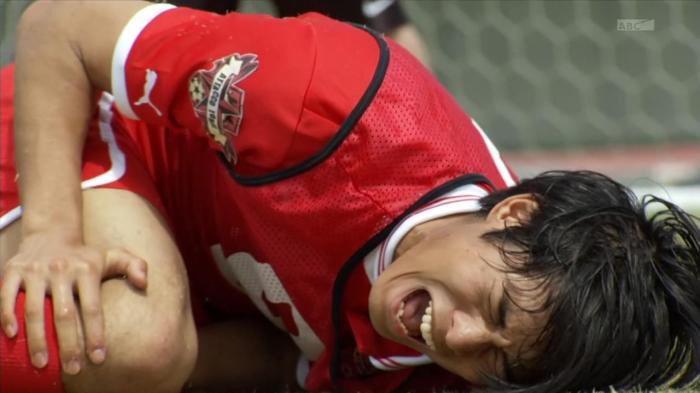 Zigg’s Thoughts: Before we say anything else, I need to accentuate just how fantastically terrible that ‘injury’ squence looked. I’ve seen more graceful belly flops, and they were probably more painful too. Look, it’s not difficult – just show the beginning of the tackle, cut away to the sidelines and then cut back to Kazuya rolling around the ground on agony. Just don’t show clumsy slow motion swan dives.

Otherwise, it’s yet another wasted opportunity. The idea that Haruto has a festering guilt in his past is a really compelling one that could have been used to throw the character well into relief, but instead we just get some more generic angst, and while I like the dynamic that it’s the girlfriend who’s angrier at Haruto than the victim himself, again that doesn’t really go anywhere. None of the three actors can really muster the chops to do convincing emotional showdown and as a result there are a lot of blank looks into the distance that are presumably meant to be tortured but instead just come off as bored. 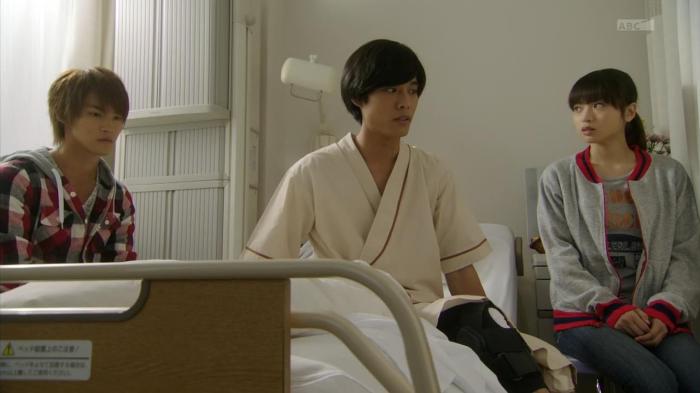 At least the fighting is good, with lots of crunchy hand to hand and an emphasis on fast strikes, helped by the fact the monster of the week can lug around an unusually slimmed down costume. Meanwhile Sora’s musing over the fate of other Phantoms might have some legs but it seems a little tossed off in this episode, too brief and sudden to be more than just a setup for a future machination.

It’s just frustrating to see Wizard take a potentially intriguing idea and just sort of piss it away in mediocrity. I’ll always welcome chances to expand on characters even this late into the story, but while the intent is good, the execution is anything but. Another swing and a miss.