Tokusatsu is not all Super Sentai and Kamen Rider. Occasionally, a studio not called Toei will attempt to cash in on the undeniable charm of men in rubber suits punching other men in rubber suits while everything behind them explodes. Most of these shows tend to fly a bit under the radar, but throughout the years, at least one franchise has been able to make a name for itself. The Garo franchise built up a sizable fandom by purposely retaining what makes older fans keep coming back to tokusatsu, while adding scarier monsters, fancier costumes, shinier special effects and sexier ladies. Now, Keita Amemiya, the creator of Garo, is returning to his beloved late-night slot with a show that seemingly aims to be the Super Sentai to Garo‘s Kamen Rider.

Nevertheless, not a single soul within the tokusatsu fandom seemed to give a single damn about Shougeki Gouraigan!! The reason for this is embarrassingly simple. For his newest work, Amemiya has chosen to haul on board a writer so maligned within his community, he makes Bruce Kalish look like Jesus Christ. Despite being head writer of beloved toku shows such as Chojin Sentai Jetman or Kamen Rider Agito, fans soon turned on Toshiki Inoue as his writing got all the more lazy and his characters all the more idiotic, culminating in the catastrophic low point of the entire Kamen Rider franchise: the OOO part of Kamen Rider x Kamen Rider OOO & W feat. Skull: Movie Wars Core. Yet somehow, the man keeps getting his bills paid. So why am I even writing about Shougeki Gouraigain!!, if no one else even wants to give it the light of day? Might it possibly be a glorious return to form for Inoue?

No, of course not, it’s terrible. 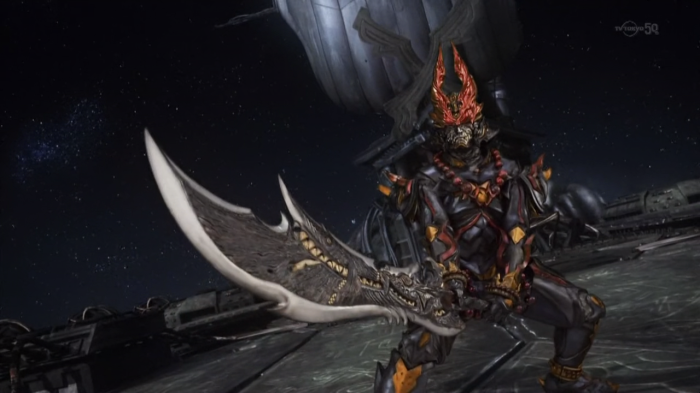 We open to some sort of horrible void of emotions dressed in a school uniform from a discount cosplay store boredly announcing to the audience that she is the main character of this story. Hitomi Kai is her name, but before she can make her trite introduction even lamer by calling herself “just an ordinary high school student”, she gets ran over by an aggressive fishwife on a motorcycle and dies. No wait, sorry, she doesn’t. So what was the point of that scene exactly? Anyways, what follows is an excruciatingly grating slog in which our heroine explains to no one in particular that she has the magical power to see monsters. This, just in case the audience is too mentally challenged to figure that out from the scene that plays out immediately afterwards. You’d think a show so hell-bent on being mature can treat its audience like actual adults, but Shougeki Gouraigan!! begs to differ.

In a masterful stroke of creative genius, Hitomi reveals that the monsters of this show can disguise themselves as humans. If that sounds familiar, it’s because Garo did the exact same thing. Only, whereas in Garo the Horrors revealed themselves with an incredibly creepy mouth effect, the Magi, as Shougeki Gouraigan!! calls its baddies, wear papier-mâché hats made by first-graders. 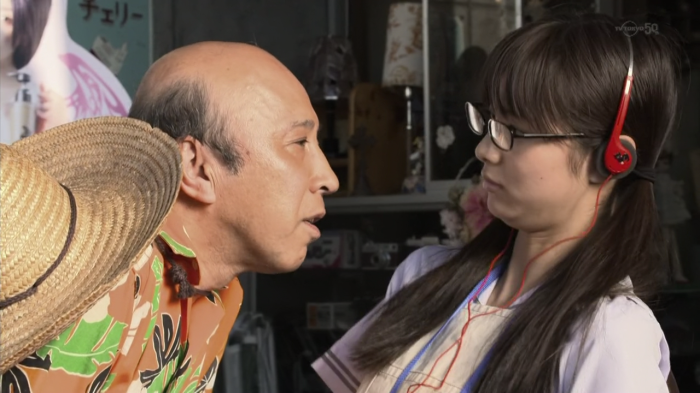 After this embarrassingly hilarious revelation, the story skips to space, where apparently a couple seems to be having incredibly loud sex in a space ship. Too bad it simply turns out to be the hero of the series, Gou, losing a game of space chess against his topless fairy sidekick, Navi. In a painfully awkward segue rivaling only her orgasmic moans and squeals of victory in terms of subtlety, Navi starts exposing Gou’s backstory for no good reason whatsoever. And that’s not all she’s exposing, har har har. Also, no, you don’t get any points for guessing her actress’ prior occupation. In any case, it turns out that Gou is a Lightian, charged with delivering “Darkians”, or Lightians who turned to a life of crime to a penal colony. That sounds a lot simpler than the show actually thinks it is, because of course this entire explanation is buried in nonsensical terminology, bloated phrasing and blatant nudity. After all, what better way to cover up how little sense your plot makes than uncovering everything else? Hey, it worked in Game of Thrones! Anyways, cut back to good old planet Earth, where Hitomi is busy looking for a sliver of personality when she is interrupted by an overzealous old man trying to sell off a closet he found at her grandma’s antique shop. Granny seems interested, but Hitomi quickly finds out that the closet is housing a monster, and advices her grandmother to refrain from buying it. Interesting, Hitomi. Will you follow up on this? … Of course not. Poor girl spends the rest of the episode cutting pickles, making dinner, undressing in the least sexy cheesecake scene ever committed to film and listening to creepy audio recordings on her headphones in the bathtub. That sure sounds like a good idea, sweetie. This blatant disregard for common sense can be attributed to Hitomi’s apparent passion for rakugo, that bizarre and completely incomprehensible performance art that you can only understand if you are Japanese and over the age of 70. The story she is listening to appears to be somewhat related to the plot, but I honestly don’t think I am missing out on anything subtle and nuanced by ignoring it altogether. 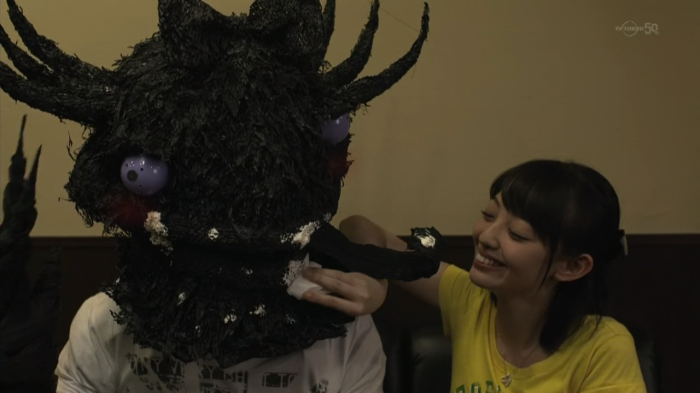 Meanwhile, Gou and his painfully underdressed companion seem to have gotten themselves in a fight with a ginormous Magi, which — surprise, surprise — takes on the appearance of a naked woman. In the resulting five minutes of barely choreographed CGI nonsense, a prisoner named Jin, a former friend of Gou’s, makes use of the maelstrom of explosions and breasts to escape. Gou tries to stop him, but in the aftermath is blown out of the ship. As Gou and Jin fall towards Earth, Navi saves the ship by hiding it in a different dimension… because apparently she can do that. While Gou washes up on a beach safe and sound, Jin is less fortunate. His unconscious body is found by two random passersby, yet as soon as one of them approaches him, Jin promptly executes the poor man. The other man, played by the infamous Toshihide Wakabayashi, aka Gai Yuki/Black Condor from Jetman, begs Jin to kill him as well, claiming he is tired of living. Hey, I’d be tired of living too if I lived in a world where everyone is a moron. Jin apparently agrees and humours him, making use of the opportunity to take on the man’s appearance. So… if Jin didn’t even need to kill the man to take over his body, what was the whole point of that ridiculous “I am tired of living anyways” line? 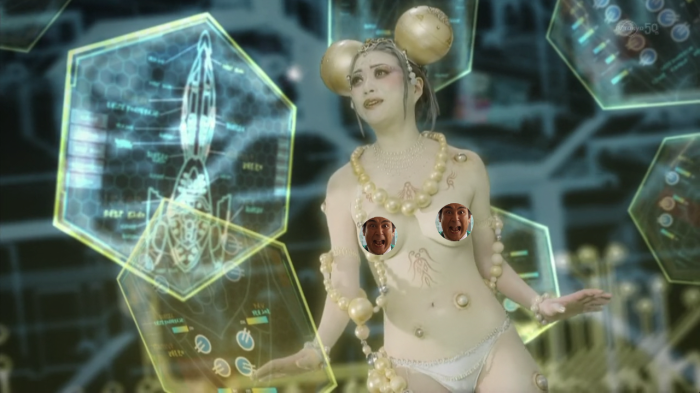 Well… uhm… anyhow, as soon as Gou reunites with Navi, his boss pops up to get on his case. The shrouded man tells Gou that Jin has somehow managed to call upon an army of 1.000 men in order to conquer Earth. After all, why would we show something when we can tell it, huh? When Gou learns the army will arrive in exactly 100 days, he boasts he can take on the army by himself, but Boss Man claims that he needs the help of five powerful exiled warriors, who conveniently happen to have been exiled to earth. What a pleasant, yet entirely predictable surprise! Speaking of entirely predictable plot developments, guess who conveniently arrives on the scene? By the way, guess who is entirely unsurprised by the fact that there is a) a monstrous-looking alien sitting on the beach, b) said alien is accompanied by a glowing flying fairy who is c) practically naked? Guess who’s going to stop talking about this dumb show now?

Guess who will most certainly watch the second episode of this disaster?