Aoba is living a peaceful life, working at his grandmother’s junk shop and hanging out with his robo-doggie computer. That comes to an end when he gets sucked into Rhyme, a popular and apparently dangerous new virtual reality game.

There’s a lot to like in this first episode, most notably the visuals. DRAMAtical Murder is easily the most stylish thing I’ve watched this early in the season, with some creative character designs and amazing color choices that make all my graphic designer senses tingle. The near future setting looks cool too and I’m particularly amused by the computer pet companion things that everyone seems to carry. Throw in an impressive fight scene with some super CREEPY killer bunnies and there was certainly plenty of pretty things to look at.

Unfortunately, the episode itself was pretty dull. The character introductions and explanations are delivered in the most flat, boring way possible. It felt like you were reading the visual novel, which basically means the director failed in adapting the material to anime form. Making matters worse, we don’t even learn much about them other than a few key details. It would have been so much more palatable if they could have just been introduced when it was time for them to be relevant to the plot, as opposed to having Aoba randomly bumping into people in the street.

Despite the rocky start, I do think there’s enough pieces here for DRAMAtical Murder to go places. Hints of Aoba’s mysterious past and conspiracy theories around the sudden rise of Rhyme are a solid enough of a foundation to build a good story, assuming they can be presented in a more interesting manor than just a series of conversations. At the very least it will be pretty look at, and I wouldn’t mind seeing some more flashy action scenes. This series might just be worth keeping an eye on. 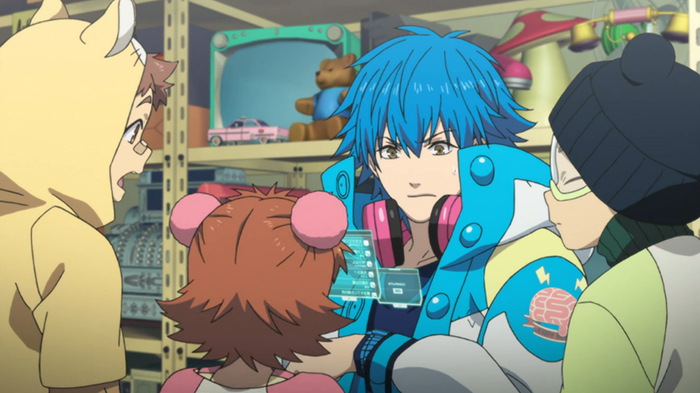 These otome shows just start to blend together after a while. Crazy hair, stupid clothes, horrible plot development, everything that is horrible about the genre is on full display in this show. It also has the ever-present otome problem of having to introduce each and every single character before the episode is out. It makes for really awkward scenes, like when Yaoi Vincent gets bumped into, says nothing, and then rides away five seconds later. Did I mention that this is a Yaoi show? Check that off on the list of reasons to not keep up with it. The VR aspects are kind of cool as concepts, but they’re let down by really chunky 3D animation. As always, I’m sure if you love BL then you’ll love this, but eventually someone’s gotta be able to make something that can be good and BL right?

Introductions are important. When a visual novel is adapted into an anime there is a tendency to follow the same formula every other visual novel adaptation follows. Protagonist does mundane thing and for one reason or another bumps into all the heroes or heroines. In the end all the characters are introduced and maybe you even learn about the overall story in the process. This works in a visual novel with time to build nuance into all the little interactions. It doesn’t work so well in a 30 minute TV show. That is exactly what we got out of this first episode. We met some boys, watched our protagonist walk around town and learned that he is somehow special. That probably makes this show sound pretty boring and a part of me would just like to leave it at that. I really do hate the way this story is introduced, but I would be lying if I said I hated everything it had to offer.

One thing I that amused me was the talking dog with a deep voice. I guess technology has advanced to the point where dogs can speak with some sort of cybernetics or something? I hope that will be explained later. I also liked how colorful the world is. Stories with gangs usually involve lots of brown and black. This anime violates the rainbow in order to give color to it’s otherwise bleak setting and I appreciate that. Most of the episode was boring for me, but the ending sequence caught my attention. There is a sort of virtual reality thing going on and the fight that happens when the protagonist gets pulled into this sort of virtual reality death match was pretty fun. The rest of the setting with potential for gang wars and people vanishing could be lead in to something interesting.

Despite my complaints about the introduction and the fact that I’m not part of the target demographic I am actually kind of curious to see what it all goes. If the presentation improves and gives our protagonist something more interesting to spend his time on this might be a neat show. I need a few more episodes to decide.