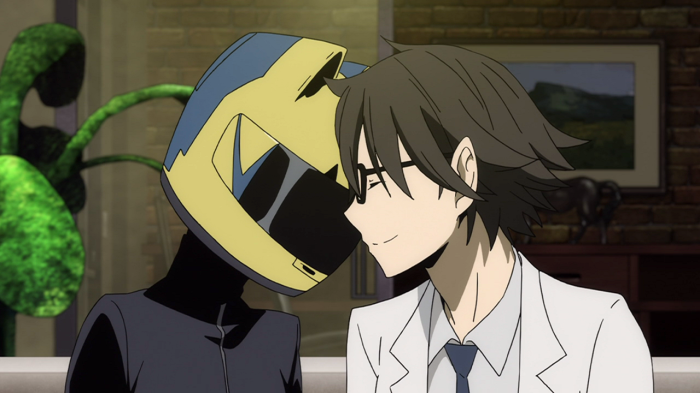 Celty, Mikado, Anri, Aoba, Mairu, Kururi and the Party Van Clan all try to outrun the swaths of bikers chasing after the ten-million-yen bounty on Celty’s helmet. Oh yeah, and there’s a body in the bag she’s carrying.

This week’s Durarara!! was as action-packed as last week’s was dialogue-heavy, with only Aoba’s malicious reveal at the very end of what has to be one of Celty’s longest days taking attention away from pretty much every main character squaring off against the most comically colourful band of bikers since… well, the cast of The Rolling Girls, but whatever. If last episode reassured you that a considerable percentage of Durarara!!‘s cast is pretty messed up, this episode showed that but a few of them are bad people all the same. Getting to see Dotachin kick ass, Ruri and Anri use their creepy serial killer powers to help Celty out, or Mairu and Kururi hatch a ridiculous plan to inadvertently give her her million back, the battle royale gave pretty much every character their time to shine. The whole bounty subplot hasn’t really pushed the story forward in any direction, but it served as a wonderful way of slowly reintroducing viewers to Durarara!!‘s quirky world and characters, while at the same time sowing the seeds for new developments. 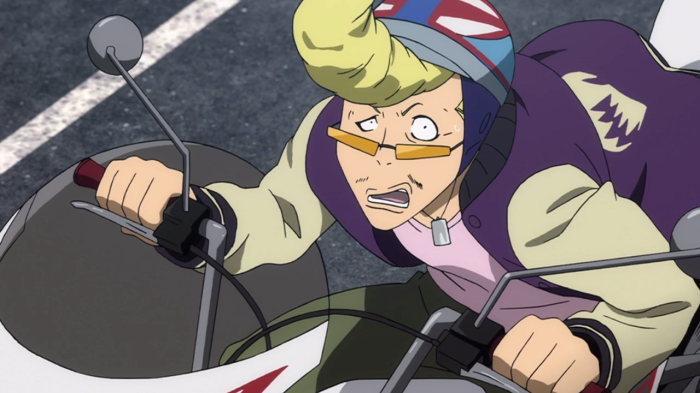 The main attraction of these seeds is, of course, the revelation of Aoba’s true intentions. If his name being ‘Ao-ba’ (TL Note: Ao means ‘blue’) wasn’t enough indication already, the revelation that he’s Ran Izumii’s younger brother pretty much confirms the fact that he’s the new boss of the Blue Squares, and as any self-respecting gang leader in Durarara!! wants nothing more than to rekindle the feud between the various colour gangs and the Dollars. In case you don’t remember — because season one was, y’know, five years ago — Ran Izumii was the nasty piece of work in charge of the Blue Squares before the Dollars came to town, and the one responsible for breaking Masaomi’s girlfriend’s legs. His brother… doesn’t really seem a lot better.

That might be a bit of a problem, though. Aoba is, as far as I know, the only Durarara!! cast member who isn’t at least either totally messed up or a complete bro. He’s not as endearingly hateable as Izaya, as psychologically interesting as Ruri, or even as hilariously over-the-top as the numerous mafiosi and gang-bangers roaming Ikebukero. He’s just kind of a slimy jerk, and that seems to be it for now. The rag-tag bunch of punks he’s gathered around him don’t exactly seem like much of a threat to the group that includes Celty and Shizuo, either. I’d say the man will already get to count himself lucky if the Dollars even bother with him amidst all the other nonsense they happen upon every single day. Aside from this worry, though, this episode proved more than ever that Durarara!! hasn’t lost any steam after its five-year-long hiatus, with its swashbuckling action and kaleidoscope of interesting personalities. It’s just as essential in 2015 as it has ever been. 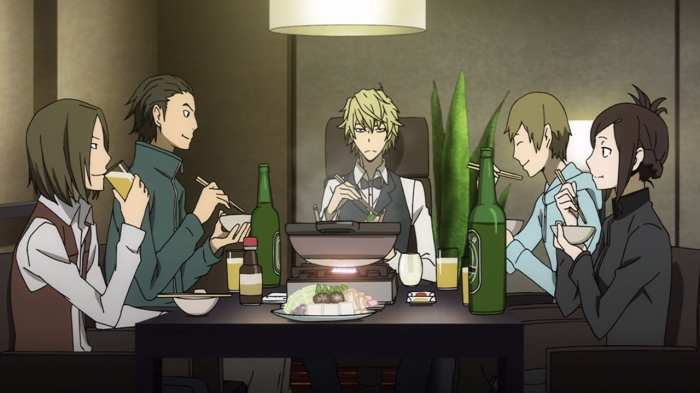 One thought on “Durarara!! x2 Episode 4”