A bunch of girls get introduced in rapid fire succession to the point where none of them are memorable. The main girl has big boobs and does gymnastics and another creepy girl takes her picture. That’s all I got.

Jel’s verdict: Your Roots Are Showing

Full disclosure: I only watched the first seven minutes of this, if you couldn’t tell from my description. Maybe it’s season preview fatigue kicking in or the incredibly annoying voices all the characters seemed to have (I’m leaning toward that) but either way I just couldn’t stand to watch anymore. Even beyond that, the bits I did see were incredibly boring and didn’t seem to be going anywhere as the girls were introduced so fast that I had no clue what was going on. The sheer number of the girls is the hook of the game from what I understand but this is an anime series and not an iOS dating sim, you need more than just a flock of cute girls to make a good show. So while I’m well aware this is a totally unfair review you can take the fact that I couldn’t finish as an indication of the quality of the show. The art is ugly, the character’s voices are obnoxious, and the prospects of any plot beyond cute girls creepin’ on each other are very slim. Do not watch. 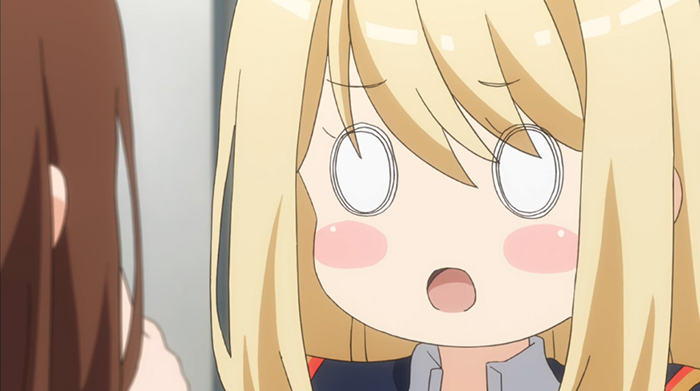 Marlin’s verdict: The Most Boring Thing.

The only way I could possibly explain anyone deriving enjoyment from this show is if they have some kind of unhealthy obsession with the voice actress or the fictional girl they represent. This show was boring to an insulting level. How can you possibly justify using a full episode of airtime just on having some random girl try to return something to another random girl. It doesn’t help that Chloe, the foreign exchange student because of course there’s a foreign exchange student, sounds like she’s been hit on the head and has to form her sentences very carefully. The only reason I watched this was because I was bored and I knew I wasn’t going to let Jel suffer alone on this. Even that didn’t make my time wasted worth it.