Team Drive tries to figure out the mystery behind the Roidmude who has been been scamming women before Rinna becomes his next victim. Next, they chase after a Roidmude who has taken to vigilantism, in a case very similar to one from Gen’s past.

A surefire way to make Zigg and me like your tokusatsu episode is to include a silly white dude spewing hilarious amounts of gratuitous English, and with the inclusion of Professor Harley Kamen Rider Drive has managed to brighten up what was otherwise a rather tepid installment. Episode 16 already suffered from some shoddy autopiloting, and with its odd refusal to focus on Rinna, in spite of this arc being about her, the second part follows suit with lousy, unfocused pacing and another convenient powerup ex machina to artificially inflate the hype. Luckily, a classic clever Sanjou twist ends the arc on a high note. Creepy pick-up-artist types make for instantly despicable villains, but aside from this week’s Rider Kick fodder, it’s the newly re-reformed Chase who steals the show. If Taiko Katono started off struggling to realize he wasn’t supposed to be the series heartthrob, he’s fully embraced Chase’s chilling stoicism by now, putting that ice-cold stare and booming baritone of his to good use at last.

As evidenced by the above paragraph, Drive once again remains a mixed bag, though one still on the right side of entertaining. Kiriko getting to kick some solid butt is more awesome than this show’s makers ever would have guessed and while the mystery was — as we stated last time — not the strongest, the revelation had me genuinely shocked. Sadly enough, as last episode already felt like the back half of a two-parter, this conclusion has very little plot aside from this twist to fill up its 20 minutes with. Instead of focusing more on Rinna and her relationship with Sasamoto, or on why Sasamoto went from pretty cool guy to ‘reals before feels’ douche and eventually pseudo-rapist scumbag, most of the episode consisted of action. As a tokusatsu show, the action should be Drive‘s highlight, but at this point, we’ve established that whoever’s behind the camera here seems to have taken all of his cues from Michael Bay. Mach’s debut fight in Type Dead Heat is as unappealing as the suit itself, which is evidently a huge bummer for a show supposed to be all about cool fights in colourful costumes. 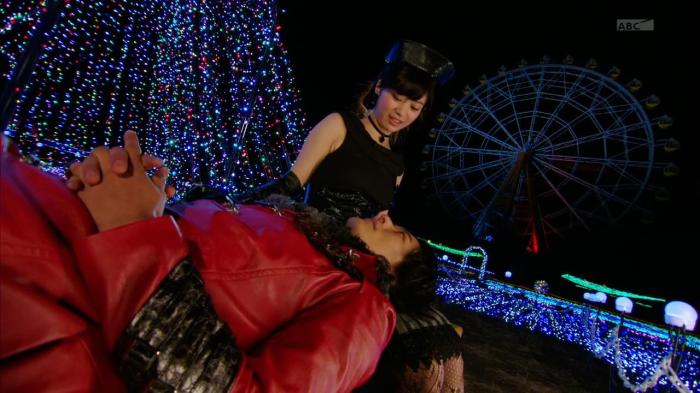 Now if you think I’m just repeating myself, don’t worry, you’re not the only one. That is Drive‘s biggest issue, and what makes it such a bother to write about — its flaws are consistent. Gaim found new and interesting ways to be good week after week, and Wizard found new and interesting ways to be bad week after week, which is what made them nice to write about. Drive, on the other hand, knows what makes it alright and sticks with it. It’s only logical then that the criticisms I can make remain the same as well. It’s a fun show to watch, but not to cover, and to me, these are two very different things. Therefore, this will be my last regular contribution to our Drive coverage, for as long as the show sticks to playing it safe. I’ll definitely be watching along with Zigg,though, so don’t think you’re rid of me just yet.

It’s episodes like these when you remember that Kamen Rider does tend to deal with subject matter which belies its juvenile audience. While it’s rare (but not unheard of) for the core tenets of right and wrong to be challenged in western shows, here we’ve got a story with an actually interesting moral conflict. Granted, it remains one which has been thoroughly explored – what are the limits of justice? – but it’s always one worth asking. What makes this example especially effective is that Drive anchors it to its most shocking and genuinely unpredictable plot twist yet, in making Gen’s old mentor the villain of the piece. It’s a superb twist on the time-worn cliche of the retired officer with one last case, Tachibana’s actor sells both his grizzled good man facade and his cold, imperious monster alter-ego with considerable poise, and it helps this is one of the snazziest, most coherent monster costumes they’ve had in weeks.

The other side of the equation is encouraging too, with Gen being given some much needed character work and Taira Imata getting to stretch his serious acting muscles. It’s a surprisingly believable shift too, since Gen retains his trademark intensity, except it’s now focussed on actual cause rather than just comic relief. Furthermore there’s still some good pratfalling included to keep the character mildly consistent with previous portrayals. Gou also gets decent screentime here and it’s a good little exploration of how his flashy personality and stubbornness can often cause issues. Pleasantly, this moral isn’t shoved in our faces, but we’re allowed to draw it naturally from his somewhat vainglorious actions. His scene with Kiriko is excellent, spiky and snappy in the way real siblings often are. What with this and some crumbs of characterisation from Rinna last episode we’re at last digging into the cast in the way I’ve wanted for a while now. 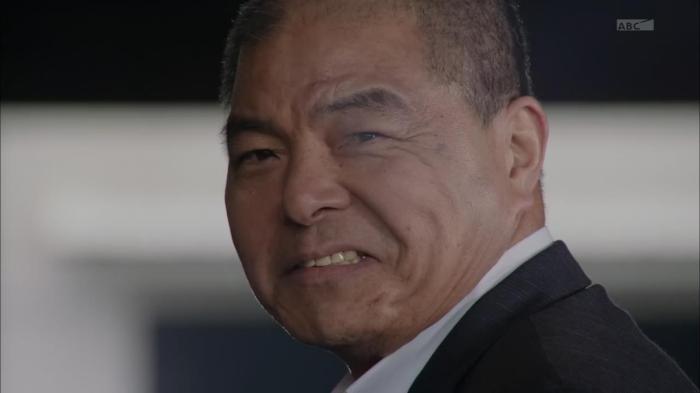 With that said, the episode is really dragged down somewhat by the action finale, a frustratingly recurring theme in these blogs. Dead Heat is just an awful, awful form and I deflate every time it appears. The poor editing also deprives us of some of the coolness of the kendo sword style fighting. However, some of this is made up for by the return of iceman Chase, who continues to thrive in his newly restored coldly evil persona. In fact the villains in general have some strong stuff this time round, with Heart and Medic’s desire to cultivate Judge’s unorthodox style playing into their developing characters. Meanwhile Brain continues to be baffled and frozen out, and it looks like he’ll be the one to fall to the inevitable early baddie whittling down. Despite some rough edges Drive showed big improvement this episode and I’m eager to see how they wrap it up.