An interdimensional gate has turned New York City into a melting pot of the supernatural while simultaneously cutting it off from the outside world. A secret society called “Libra” fights to protect the city from unscrupulous sorts, most notably the enigmatic Femt, the “King of Depravity”.

I’ve always been a fan of anime-style urban fantasies along the vein of Baccano!, Persona, and Durarara!!, and this seems to be hanging around the same shady New York alleyway as the rest of them. Jerusalem’s Lot makes for a wonderfully realized setting, with the opening infodump montage immediately establishing what kind of bizarre place the city has become over only a few years of being overrun by monsters and aliens. The main weak link here is protagonist Leonard(o?), who seems to fall into the sadly expected cliche of spineless anime protagonist, which may or may not be even more egregious depending on the exact powerset of his Mystic Eyes. Still, the action’s got plenty of spectacle and I’m looking forward to finding out more about Libra’s colorful crew, so count me in on BBB.

Rie Matsumoto is either a complete genius or the only person to have ever convinced Toei Animation of invest any money in anything, and I don’t know which of the two is the most miraculous. With the eccentric, energetic, unapologetic and briskly imaginative Kyousogiga, she defined her career before it even began and with Blood Blockade Battlefront, her first foray as a cog in the machine of manga adaptations is a fact. Suffice to say, Matsumoto’s ideosyncratic style has lost none of its swagger after the complete one-eighty Bloodborne Battlefield is compared to her earlier works. The murky, hard-boiled New York setting is a far cry from the pastel-coloured fairylands she orchestrated back at Toei, but the dynamics of her action scenes and general lunacy of her characters remain intact. Most of the credit for Bloodrayne BattleBlock’s impressive world building and enigmatic mechanics goes to Trigun scribe Yasuhiro Nightow, yet Matsumoto and studio Bones bring the world to life with a stunning attention to detail. From the flawless English on every street corner to the bizarre alien creatures inconspicuously trying to blend in, Jerusalem’s Lot is a living, breathing place.

While BlazBlue Bladestorm can be rather easily traced back to Kyousogiga when it comes to the visuals, narratively it is far more similar to two other highly creative cult favourites: Baccano!, and its contemporary cousin Durarara!!. Ultraviolence, non-linear storytelling and a penchant for outlandish characters with ridiculous names are not all Brill Bruisers Breakdance shares with the works of Ryohgo Narita. Like Baccano and Durarara!!, it is all but incomprehensible at first glance. Luckily, the adaptation gives us enough hints to pull together a vague idea of what the heck is going on: we know who the good guys are, who the bad guys are, what the bad guys do wrong that the good guys want to prevent and how they can prevent it. The border of the decently-sized puzzle that is Bloody Brothers Battleborn is here, it’s just that all the puzzle pieces to fill it in are desperately lacking. There’s nothing wrong with a bit of mystery in your first episode, however, especially if the breadcrumbs are as delicious as Blood Blockade Battlefront. Only one with the Eyes of God can see whether it will be the hit of the season or the umpteenth one-episode-wonder in Bones’ back catalogue, though given Rie Matsumoto’s speckless track record, any doubts up to now would be unreasonable. 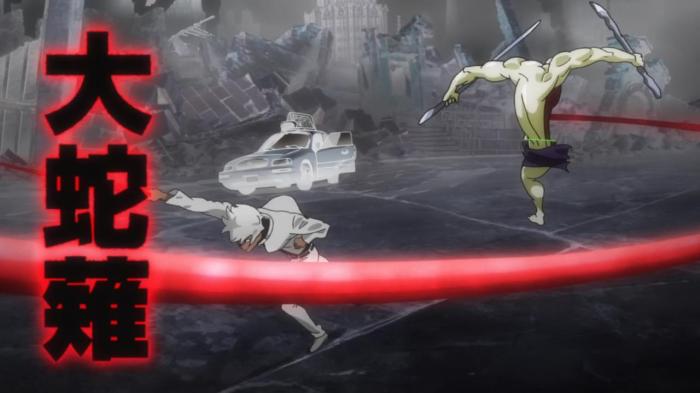 I wasn’t aware this was an adaptation of a Yasuhiro Nightow (of Trigun fame) manga until after watching it. Upon realizing that fact, it became so much more apparent what exactly I had gotten myself into. Blood Blockade Battlefront throws you right into the fray, and while it’s certainly disorienting, it’s no less entertaining for it. The new New York City is a wild place, teeming with energy and hijinks in equal order. Our main character seems to be your relatively standard milquetoast anime guy, barring his crazy super eyes, but we’ll see where that goes. Overall, between promises of crazy action set pieces and an absolutely fascinating universe for it all to take place in, I’m ready for more. Here’s hoping they start to clear things up from here on out though.

Artemis’ verdict: Sign Me Up For More Joyous Confusion

I basically didn’t have a clue what was going on in this episode, but then again, it’s possible I wasn’t meant to. Blood Blockade Battlefront seems like it’s going to be a hectic and frenetic show filled with oddball characters, random explosions, and conversations that might not make a whole lot of sense except in retrospect. The energy of the piece is infectious though – somewhere between Durarara!! and Kill la Kill – with a cool vibe and plenty of action to make up for the fact that… well, that I didn’t know what the hell was happening most of the time. But hey, sweet soundtrack, and an A-list vocal cast. I can’t speak for anyone else here, but I’ve always got time for Ishida Akira. 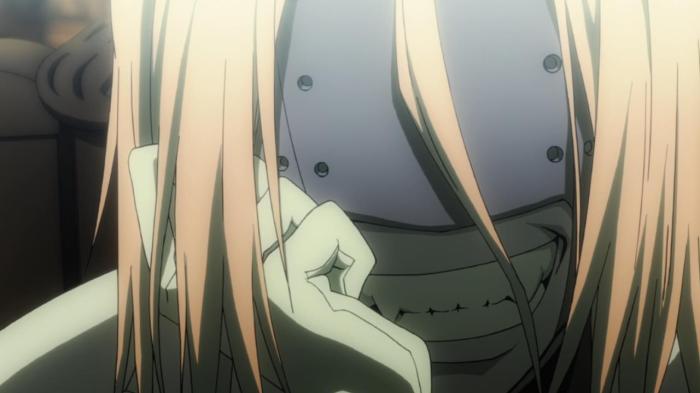