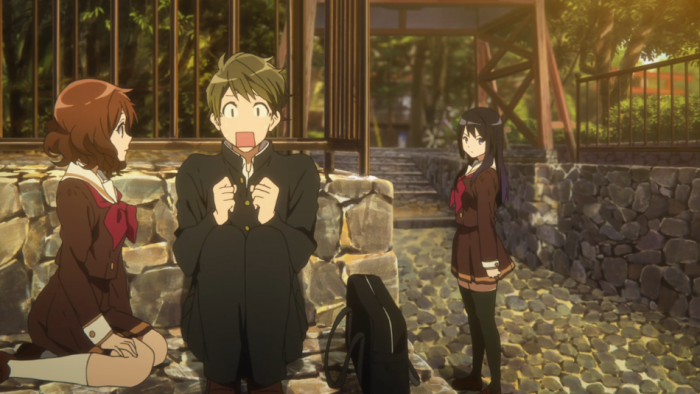 Tuesdays at 1:00 pm EDT on Crunchyroll

The parts are broken up as Mr. Taki starts his tough training regimen. While dissent is high among the lackadaisical band members, others like Reina are quickly backing his attempts to whip the band into shape. When Kumiko vents with Shuichi, this unintentionally brings Reina to her attention. With SunFes coming up, the next ensemble is make or break for the band.

Mr. Taki really laid down the law this episode and I love it. Sure, his methods are a bit on the extreme side, but sometimes the only way to get people’s attention is to rub them the wrong way. If someone who’s ostensibly played for three years can’t even handle fundamental exercises it’s clear something terribly wrong was going on in this band for a long time. I’m surprised this rough training session didn’t result in some people quitting the band. Considering just how lazy some of them appeared to be, I would have expected some walk-outs as soon as that running stunt. Are you not allowed to quit a club once you join it, or is it just not socially easy? I did wonder why the bass group got out so lightly. I guess they do seem to have the best concentration of talent considering they recruited two regular players. I still don’t get Kumiko’s deal with Reina. I mean, at least it seems like it developed this episode, but Kumiko acting like a spaz every time she comes around needs to stop. 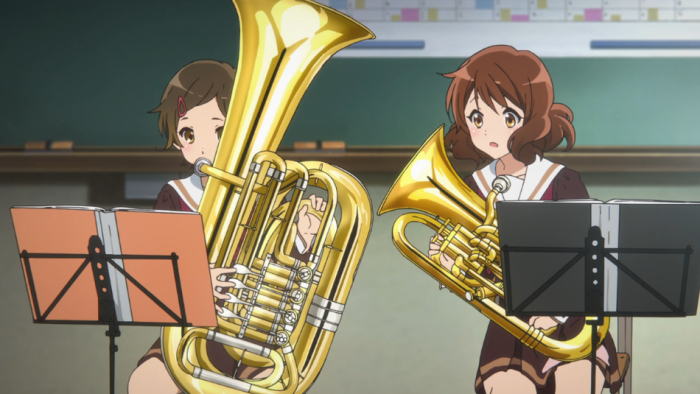 It would appear a much different animation director was on board for this episode. Eschewing the normal Kyoani moeblobs, when characters are flustered they start to take on a much more fluid, almost Nichijou-esque style. I don’t know if this is going to be a trend for the rest of the show, but I’m all for it. The faces definitely helped out the scenes as the drab school uniforms and conventional setting make for a pretty boring show when no one’s holding an instrument. I was also reminded how thankful I am that KyoAni is at the helm here, as I can’t imagine any other studio would meticulously animate so many different instruments like this. Speaking of the direction, I think I’ll take this time to admit what Artemis said about this show back in our First Look: this show is a liiiittle too obsessed with legs. This is something I came to terms with since last episode, but because of how egregious it was this episode I had to address it personally. Nothing wrong with legs being a natural part of the shot, but when we’re just getting scene transitions of girl’s legs without context first it gets ridiculous. 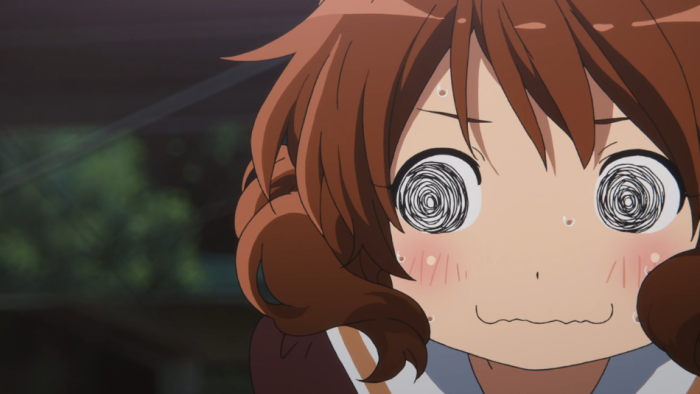 I was worried after last episode, but I really like the direction we’re headed in. One thing that really stuck out to me is the use of some pretty high level terminology. I’m sure some people are going to be lost when they talk about overtones or ictus, but it’s that level of detail that gives some legitimacy to this show’s presentation of an actual band. I’m hoping focusing on the troubles of the whole band will mean we get to interact with more of the characters. I’m not sure how it works in Japan, but you’re never only going to be friends with people in your section, so it’d be nice to see more in depth interactions like those with Kumiko and Shuichi. I also liked that Kumiko seemed to be ignoring the usual dumb senpai decorum by getting Natsuki to play with them. Sure, it seemed like she was struggling to do that like it was a big deal, but the fact that she’s willing to cross that line spoke to a lot of maturity to me, something I’d like to see more of next episode.