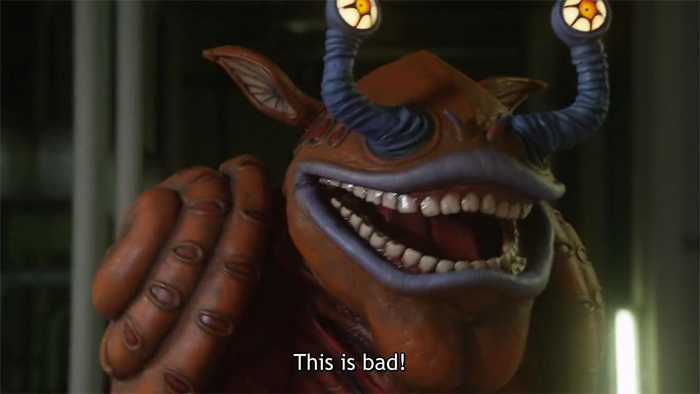 I remain convinced that the Ultraman formula can work. To say I’m a bit of a Godzilla fan is an understatement, so the premise of a weekly show that prominently features giant monster fights, crazy made-up science and copious use of explosions is very, very appealing to me. I’ve seen a lot of the original Ultraman series and a few episodes of Ginga, but I was very excited to follow an Ultraman show while airing with fellow Glorio-er, colons.

Something we learned towards the end of the series was that there are a staggering number of writers that worked on Ultraman X. It’s not uncommon to have multiple writers across a long series like this, especially when there wasn’t much in the way of continuity, but this is almost certainly why the show feels like it’s all over the place. We see flashbacks to the loss of Daichi’s father almost every episode, and we only really see the importance of this event in one, maybe two episodes towards the end. We learn that the crazy light show from the first episode was actually a big baddie that’s come to destroy Earth… in the penultimate episode, when they show up. Honestly, this show would have benefited from having a looming threat so that we could see Xio plan their defence, but instead it feels completely throwaway. It’s like the writers all received the same bullet list of facts about what this Ultraman is about and were told to come up with a one-off episode. I would hazard a guess that this isn’t far from the truth.

Episode nine is the first episode that me and colons agree to be good. I can remember the conversation we had about it the week before it aired, based off what we’d seen in the preview at the end of episode eight. We laughed about how bad the show was, yet we couldn’t quite work out how something could actually nosedive further. The preview showed a rugby-themed episode, obviously inspired by the then-incoming Rugby World Cup. This is fairly typical of special toku episodes – I remember that the football special in Kamen Rider Gaim wasn’t amazing either. However, this is hands down the best episode in the entire series, because it almost completely drops the monotony of the rest of the series. It was fun.

I would go so far as to say that it’s entirely the fault of the writing as to why this show failed to live up to expectations. The sets looked great, the special effects were on point 75% of the time and the monsters were varied. There’s obviously some nostalgia to be had in the monster department, as well as the constant Ultraman cameos, but for someone seeing these monsters for the first time, they were completely fine. They could have been more threatening, but again, that’s an issue with the writing.

It was the characterisation that really suffered because of this, though. I didn’t care about any of the members of Xio as the show left it far too late to go into backstory and personal motivations. Daichi lost his parents but seems fine until they get around to the episode that shows he’s actually kind of bothered by it. Asuna is a member of Xio that wore high heels on an important mission that could have killed her. Wataru is a guy who makes weird faces and is upset because his friend likes the girl he likes. Shotaro is the captain and looks grumpy a lot of the time. Sayuri had a pretty good episode where she turned into an Ultraman to save her kids from a monster, but they stripped her of that power and any other interesting details at the end of the episode. Xio exists to ‘protect the world’ but only really seems capable of watching Ultraman do the work for them. What they were doing before X showed up is completely beyond me.

Honestly, I wish I had more to say about these guys after spending 22 episodes with them, but I don’t. Ultraman X spent more time characterising the people and monsters that appear for one episode only, each writer seemingly assuming that Xio was already taken care of. I can tell you more about the young girl who spoke to a friendly hill monster than I can about the protagonist of this show, which I feel best illustrates how deep this problem goes.

I’m not interested in a sequel to Ultraman X. That ship has sailed and these characters are beyond saving. However, I remain open-minded about a new series in the future, hopefully with a better director at the helm to point the writers in the right direction. There were three episodes out of the 22 that I would say are worth watching, so I know there’s a good show to be had with this formula. This just isn’t it.

There are some great moments in Ultraman X, but they’re not worth watching it for. In fact, the things the good bits do are in many ways negated by the fanatic dedication Xio have to the doctrine that they have to fight something every week.

The few good moments are all related to the characterisation of monsters. The doctor, the rooted plant thing, the rugby team, the little girl’s imp friend; there are touching friendships and a potential for real development. Members of Xio repeatedly learn about the compassion of monsters, but they still have to fight something every week.

Even the big monsters that Xio fight are established as generally sympathetic early on. Apart from a few cases where there is involvement from someone bad, they are for the most part just lost and confused. One early episode features a bird monster called Birdon trying to nest in the mountains and accidentally hurting a few people in the process. At this point, Xio have a number of options. They could attempt to move the thing. They could even just ignore it; after all, their fights in cities doubtless kill many more than the few people trapped in the nest. But no, Xio have an obligation. They kill Birdon’s children and maim the poor thing, because they have to fight something every week.

There were opportunities throughout Ultraman X where there could have been interesting twists, some change in the state of the world, some change in our heroes’ perspective. Perhaps Xio could have taken up monster husbandry rather than their current military approach after the Birdon fight. Perhaps they could have harnessed the inter-dimensional portals that show up at one point to set up a reserve on some barren planet. Perhaps anything interesting whatsoever could have happened, but no. Daichi continues to keep his identity as Ultraman secret from his colleagues for no reason and every week a new monster shows up to get fought.

It seems that the writers realised two episodes from the end that they had forgotten to tell a story. They had set up some things early on that were clearly intended to be expanded upon, but they’re never developed until the very end. They’re referenced, sure, but never with anything new. The final conflict arrives completely by surprise, and with no more real drama than existed in any prior episode. The real arc of this show, it turns out, is just that Xio have to fight something every week.

Fortunately for us, the enemy’s weakness is ｍｅｒｃｈａｎｄｉｓｅ．