Hello, and welcome to All Your Monies, where The Glorio Blog’s resident toy and figure collecting crew (and Iro) will run down the last week’s new pre-orders, turning a loving or scathing all-seeing eye over what’s been put out for you to spend your hard-earned cash on. This week it’s the tag team takeover as we present not one, not two, but three figure double acts!

Zigg: All along we’ve been saying how much better these are than the figmas, and there’s no change in that stance for these final two. I’m sort of secretly disappointed they didn’t come up with something truly outrageous for Jyushimatsu but it’s difficult to argue with the dumb gag arms, and Todomatsu include THE FACE which is pretty much all you need. A fine end to a fine range. Now give me Iyami.

Jel: YESSSSSS. My Jyushimatsu nendoroid is finally here and he’s pretty much what I wanted. He’s got the bat and his most common weird face, but most importantly CARTOON NOODLE ARMS. I will find a way to get him. Ah Totty oh Totty looks great too, with the mandatory skull cap and the uhh “Totty Face”, possibly the greatest nendoroid face of all time. A great way to finish up the set, and overall a huge improvement over the figmas.

Iro: Unfortunately I can’t think of a clever one liner that contains both “MUSCLE MUSCLE HUSTLE HUSTLE” and “Ah Totty Oh Totty”. Fortunately, these do look pretty great. Still, I’m just saying, if Jyushimatsu’s eyes were only just off center… 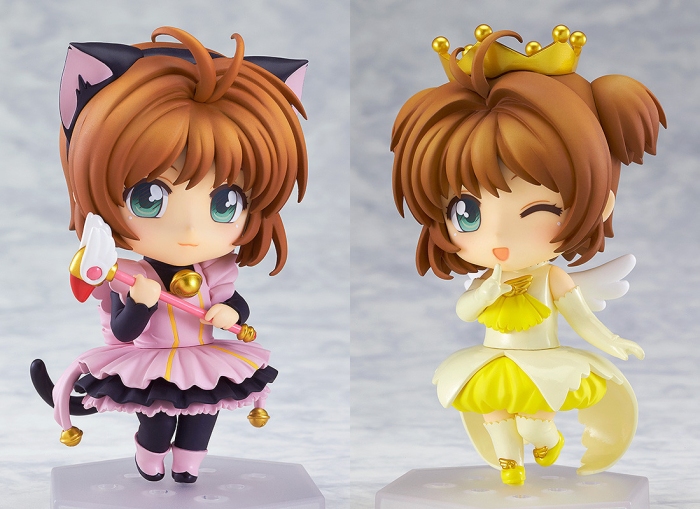 Zigg: Nendoroid co-des are basically non poseable nendoroids, which is not a bad idea considering how most regular nendoroids don’t have much in the way of poseability anyway. Unfortunately it means that we also lose the faces and accessories which are often the most fun part of the whole experience. Sakura is super adorable as usual, and these are two classic designs which deserve the leap to figure form, but I still feel like we’d have been better served by full on figures. Still, the drop in price is a nice consolation.

Jel: I guess for me it’s more notable that they are doing static nendos than the figures themselves. Kind of kills a portion of the fun but if I’m honest I usually leave my nendos in one pose anyway. The price also seems to reflect the difference. As for these, they are pretty cute and I like the contrasting colors, but I’ll defer to Zigg on this one.

Iro: Is there any single costume that appears in Cardcaptor Sakura that hasn’t been turned into merch of some kind? I call upon your endless knowledge for this one, Zigg (Zigg’s Note – Literally dozens)

Zigg: These remain lovely little figures with a ton of charm and care put into each one – I particularly like Brock’s full on campfire cooking set. The issue with the Pokemon G.E.M. figures (and the Digimon ones for that matter) is how little you’re getting for the high price. These things are a tiny 1/10 scale and that can be difficult to stomach when you’re coughing up close to $60 for each.

Jel: Three pokemon and two anime weirdos: $110 US Dollars plus shipping. All the Pokemon in Pokemon Go: FREE. I do like Brock’s cooking set though.

Zigg: Simple but effective, the more relaxed pose and stripped back look allow a lot of lovely detail to shine through on Labrys, and as ever the enormous axe makes for quite an eyecatcher. Unfortunately for this kind of money I need my figures to have a bit more razzle-dazzle and this runs the risk of being simply underwhelming.

Jel: There have been so many great Labrys’ over the years that it’s hard to say I’d recommend this over some of the better ones. I’m mostly turned off by the boring pose, but it does excel in the details. I love the added level of shading in the paint work, and the metallic effects look really nice. Labrys has a strong design overall so while this might not be the best of her figures, you can’t really go wrong.

Iro: Labrys’ base robot design is more interesting than her school uniform (I always liked the knightly detail bits), though the weird hooves have always sort of bugged me about the Persona robots. The pose is a bit dull, but this looks pretty good otherwise.

Zigg: I’m much more OK with this than the Android 17 we featured a few weeks back, since Blonde Lunch’s entire character was always meant to be a sort of weird hyper-sexualised pin-up and 80’s bad girl all combined into one. It’s a little too cheesecakey for me, but there are nice touches like the hair and the detailed weapons, and the expression is a great translation of classic Toriyama. Surprisingly neat.

Jel: Oh hey yet another perfectly fine figure of a Dragon Ball lady with basketballs stapled to her chest. Megahouse never did understand how boobs work and apparently never will. Fortunately for this line there aren’t that many ladies in Dragon Ball to begin with and Lunch is already scraping the bottom of the barrel, so we can put an end to this soon.

Iro: I’m mildly more okay with this than the Android 18 boob figure – mostly because Lunch is an artifact from when Dragon Ball was basically a dumb sex comedy and I’m pretty sure her actual purpose was to be Roshi’s fanservice girl – but it’s still way too blatant for my tastes. Bleh.