Stash away those pricey idol statues and your thirty amiibos, because we’re about to get cheap and nasty. Gacha! is your fortnightly (or thereabouts) look at the weird world of Japanese capsule toys. In this instalment, we pretend it wasn’t half a year ago that we last did this.

Cleaning solution for that figure of your waifu
J.DREAM, 5 to collect, ¥300

Euri: While there are some good, obvious uses for figure dioramas, there’s something immensely amusing about the idea of writing notes for people on miniature loo roll. I’d have to assume by the image of a mechanical pencil that the paper here is a bit stronger that actual toilet paper, which is understandable yet disappointing as I would like an authentic experience.

colons: These strike me as more of a tool for bad pranks than diorama material; perhaps you could replace your actual toilet roll with one of these while family you dislike is visiting, or perhaps you could make a subtle implication about the scale of someone’s genitalia. As an aside, I would probably buy more tissues if they came in boxes with those sweet seventies-lookin’ designs.

Euri: It wasn’t until I saw this picture that I realised how much I need an alternate universe Wolverine that has lasers instead of claws.

colons: Someone saw a version of this inset before it had the little circle in the bottom right, and decided one of two things. Either it wasn’t clear enough that the red, green, and blue bodies correspond to the colour of the light they emit, or it just didn’t have enough stuff going on. Or, maybe they didn’t want to imply they were actually lasers? Or maybe they are lasers, as indicated elsewhere, and the imagery on the rest of the thing is misleading? Gosh, I’m so confused :<

This tanuki collection has been through some bad times
Epoch, 7 to collect (+1 secret), ¥200

Euri: A disturbing lack of giant testicles, 4/10. Being completely serious though, I’d definitely buy that Tanuki of Liberty if they made a larger version.

colons: They make up for the lack of testicles with a full showing of hot nips, though, so it’s okay. How come only some of them get keychain variants, though? What if I want to carry around a wino- sorry, ‘sommelier’ with me everywhere I go?

Euri: This is a good example of the kind of junk I want on my desk at work, and they stand out enough that it’ll be easy to know if someone grabbed one for their own desk. These are really neat for the price, I just hope there’s more non-cactus papercraft in the works.

colons: Alternatively, print one out on the office printer and assemble it on your lunch break. Actually, that’s a pretty good idea, I might have to do that… 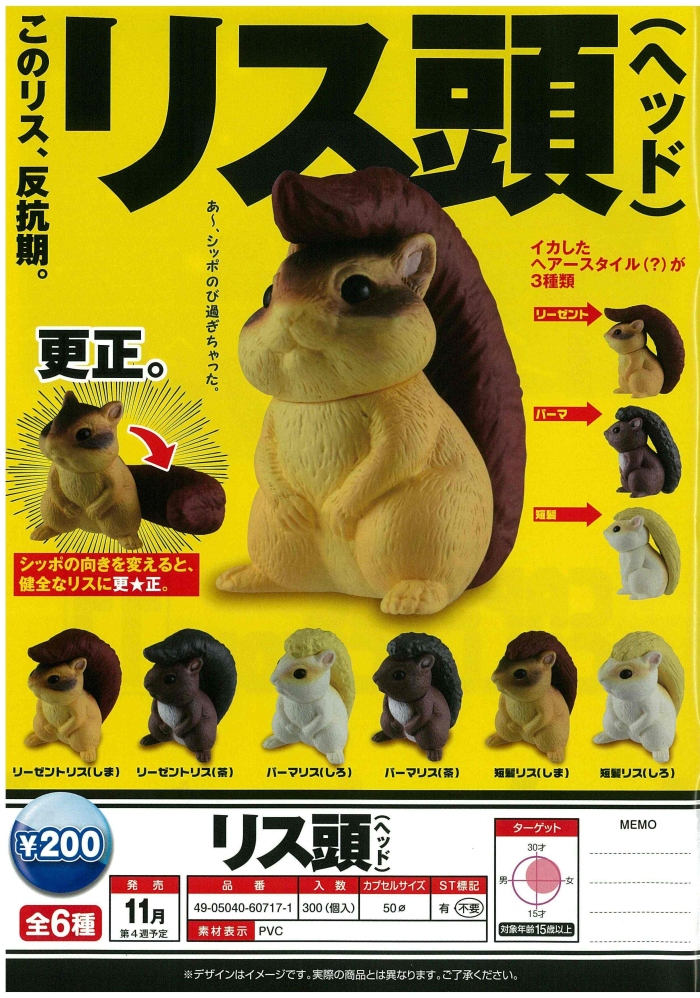 Euri: There are never enough figures featuring pompadours, so these are a very welcome addition. My only gripe is that we don’t have a ginger pomp, as I’d quite like a Squirrel-Kuwabara to go with my Squirrel-Knuckle.

colons: Okay, these are awesome, but what if they made beaver ones so they could eat pencils?